‘I just want to be normal.’

That’s the plaintive cry of feral teenager Urban Grimshaw who leads a bunch of feral kids fuelled by a diet of glue, smack, pills and booze living on the edges of society in a Leeds city centre shed.

He’s talking to Chop - aka equally damaged former social worker Bernard Hare - who adopted Urban and his mates in this often harrowing tale of how the underclass came to be a part of modern Britain.

Radical theatre company Red Ladder have adapted Hare’s best-selling book 'Urban Grimshaw and The Shed Crew' recounting the time in the mid-1990s when this gang of neglected children ran riot around the city. 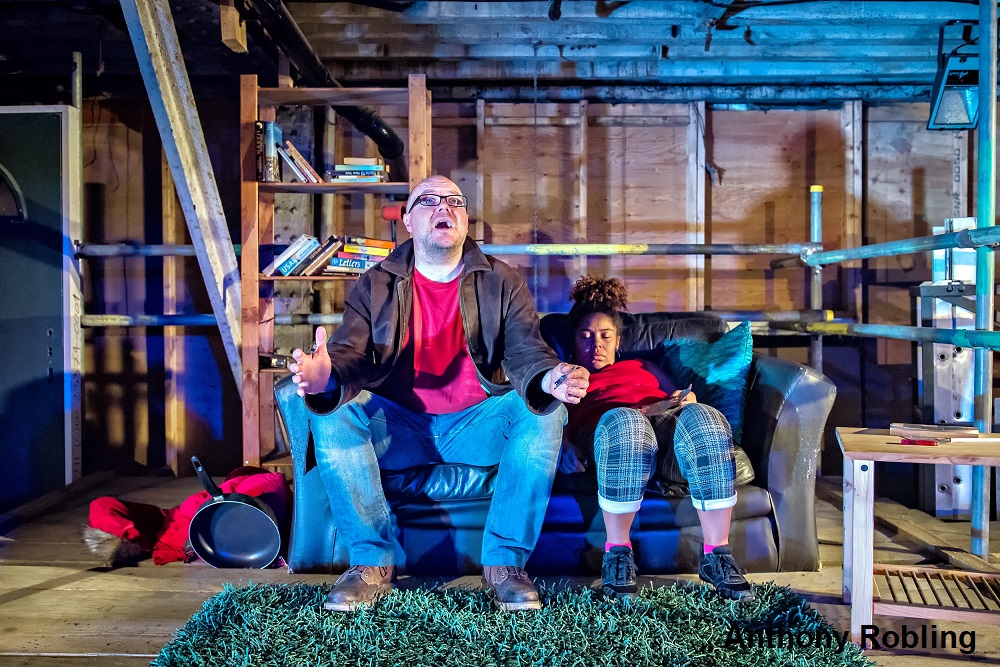 Red Ladder’s artistic director Rod Dixon was determined that Kevin Fegan’s pacey adaptation wasn’t going to be set in a conventional theatre, so here we are sat in a grimy working warehouse perched on rough steps in Ali Allen’s ramshackle set in the round. This creates a voluble crucible for the protagonists played as grown-ups to face off as try to exorcise their teenage demons right in our faces.

Fegan was born to write this producing a lovingly crafted text in verse, featuring the crew’s own slang, that gives the characters a raw humanity, despite the fact that literally, no-one cares about them other than Chop as they band together in what is a pretty dysfunctional pseudo-family.

From the moment the audience walk through the dock doors to see Urban and Chop bickering through a service hatch we see a troubled man who needs to be needed trying to save a child who just wants a dad no matter how damaged.

Adam Foster is equally magical as the charismatic Urban giving his illiterate younger self a restless energy that makes him a natural leader of a ramshackle army of outsiders who despite all their troubles operate a code of honour as they battle authority in the form of social workers and the scuffers/police.

The ensemble really gets Fegan’s words especially James Lewis as thuggish Sparky,  Rada trained Tanya Vital’s sensitive wannabe artist Pinky and Liz Simmons as Trudi who is so abandoned that she has to ask Chop to be with her when she gives birth as a teenage mum. That was the moment when you really thought what on earth is wrong with our country?

The real power of Fegan’s unobtrusive verse is it never sugarcoats an unseen underworld that - despite some really funny times like the crew’s ill-fated trip to Aberdeen - is relentlessly grim as teenage girls get knocked up to claim a flat but can’t name the father, junkies shamble around robbing other poor people to feed their habits and Urban relentlessly Twocs motors.

It is a miracle that any of the crew made it out of this hell alive, and some have created the normal lives Urban craved, but sadly their leader died a  few months back, which meant Fegan had to quickly rework the ending to mark his passing.

Dixon wanted the audience to walk with The Shed Crew in this immersive performance which worked and was an experience only heightened by the fact that the real Chop, Urban’s sister and some of the original crew were sat watching the action.

The fact that they didn’t walk out is perhaps the best review of what is rightly a pretty tough night out in all sorts of different ways, but the truly depressing thing about this tale of the original underclass is that nowt has changed in cities and towns across our divided nation.

The Shed Crew is at Albion Electric Warehouse until Sunday 1st October. Tickets can be booked through West Yorkshire Playhouse 0113 213 7700 or www.wyp.org.uk