In an age when a man who seemingly has no respect for the rules of the game, or the feelings of others, can become the most powerful man in the world then this powerful production of Shakespeare’s bloody tale of royal intrigue is timely.

A quarter of a century ago Northern Broadsides used this text to announce to a sceptical theatre world that the Bard’s word could be spoken in Northern accents, so it is fitting they celebrate their silver anniversary by again tackling the longest of the plays in the First Folio.

In a typically bold mover Richard is played by Mat Fraser who has phocomelia - a shortening of the arms - after his mother took thalidomide. As he delivers the opening soliloquy with Richard reflecting on his deformity you know Fraser is bringing all his lived experience - and personal understanding of what irrational fear of difference can do to a person - as he spits out lines like Cheated of feature by dissembling Nature/Deformed, unfinished, sent before my time/Into this breathing world, scarce half made up. 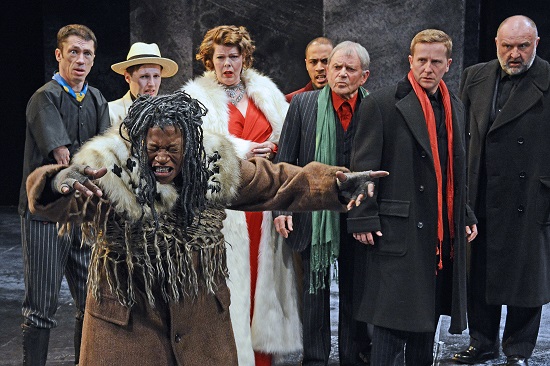 Fraser is a talented actor who has used a successful run at Hull Truck theatre - as part of their City of Culture celebrations - to grow into the role demonstrating that Richard’s real deformity is that of the soul. Fraser’s blunt and witty portrayal, that partly channels House of Cards’ Frank Underwood, reveals a sociopath who is prepared to do whatever foul deed it takes to get the throne.

It might be marrying the widow of a man he has murdered, and the moment he wrap his arms around the horrified Lady Anne is well played by Catherine Kinsella and Fraser. Richard is a man who takes the deadly intrigue of court life to a new level, and a clever touch is the board at the edge of the stage keeping a running score of his victims including the luckless Princes in the Tower.

The company is back at Broadsides’ home base in a subterranean vault in the centre of Halifax, the small stage has no set which helps focus the attention on the text that the 16 strong cast deliver in their own voices free of stage school affectation.

This is best shown off in the tense and moving interplay between Fraser and Ruth Alexander-Rubin, as Queen Elizabeth, trying desperately to overcome her horror of having two sons murdered as she tries to protect her daughter from the monster standing in front of her.

The final battle scene is cleverly staged with drums roaring, and smoke wafting across the battlefield, as a defiant Richard finally has to face the repercussions of his dark deeds.

Mat Fraser might be the star of this show, but this clever production is a fitting way for Broadsides to celebrate 25 years of doing things very much their own way. The company’s Artistic Director Barrie Rutter directs with a sure touch, and has a cameo as the ailing King Edward, which seems right as he deserves to take a bow with a company who have done him and those who have gone before proud.