Arguably the most iconic ballet movie of all time “The Red Shoes”, a 1948 post-war film by Michael Powell and Emeric Pressburger, is based on the Hans Christian Anderson fairy tale and tells the story of an aspiring young ballerina, Victoria (“Vicky”) Page, torn between her dedication to dance and her desire to love.  It is somewhat a complex story that ricochets between London and France, and between art and real life.

From the moment the curtain opens, long before any dancers appear on stage, the excitement and tension mounts as we see a fabulous 360-degree rotating arch complete with stage curtain (which throughout the two hour performance switches from front to backstage during the dance companies performances including their performance of “The Red Shoes”) move slowly towards the audience as the intro music builds up leaving you on the edge of your seat before the story even starts! The curtains then turn and the cast take their bows in front of their “audience” as we get a backstage view of the end of their ballet. 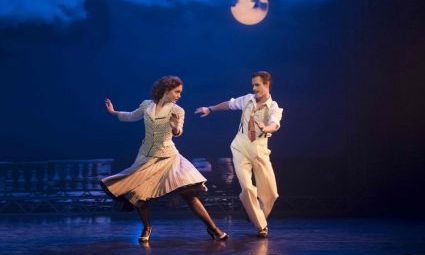 From there we are taken to an after show party, hosted by Lady Neston, Aunt to aspiring dancer Victoria Page.  There Victoria is given the chance to perform a solo ballet to highlight her talent to the Company, however they seem unimpressed with her efforts. However Victoria, along with the help of Lady Neston, secures an audition at a Covent Garden dance studio and secures a role in the ensemble.  However, she is soon given her chance to sparkle in the spotlight when the original lead suffers a fall in rehearsal resulting in a broken ankle.  We then see her transform into a spellbinding performer in her leading role of “The Red Shoes” where she meets and falls in love with musician and composer Julian Craster (Chris Trenfield).  This in time leads to her dream becoming her worst living nightmare, torn between her dedication to the arts and her passion for the stage. The Impresario, Boris Lermontov, (the director of the ballet company where she auditions) wants her to be devoted only to ballet, thus becoming a battle to decide whether to follow her heart or her mind.  This eventually leads to a drastic conclusion, and although it differs slightly from the original movie at the end, this particular ending was far more dramatic on stage, being an ovation worthy ending to this sensational performance.

Having being somewhat disappointed at previous Matthew Bourne productions; I was somewhat hesitant for this particular adaptation, particularly with knowing just how popular the movie is.  However, from the first five minutes, from the rotating arch with the theatre curtain (that switches from front to backstage, along with the wonderful lighting display as she moves from the glamorous Riviera company to the tatty run down East End music hall where she finds herself after quitting the Company which gave her the starring role), I was completely enthralled and left to eat large portions of humble pie.

This production really brings the magic of the movie to life, and leading lady Ashley Shaw most definitely belongs in the spotlight.  If I didn’t know better I would have said it was the original leading lady – Moira Shearer as the resemblance was so strong!  The company share various roles, therefore depending on which evening you were to attend you might not see the exact same cast as the previous performance.

The cast were all equally sensational making it impossible to single out a particular cast member; the three leads (Ashley Shaw as Victoria Page, Sam Archer as ballet director Boris Lermontov and love interest and composer Julian Craster, played by Chris Trenfield) were all utterly mesmerising to watch.

It was so hard to know where to look as everything from the choreography to the costumes and lighting were like something out of a fairytale (no pun intended!).

The two-hour show seemed to be over in the space of five minutes and I was left wanting more. “The Red Shoes” is quite simply the best ballet production of the century.