Set in the top of a house in a suburb of Leeds, West Yorkshire, A Passionate Woman is a romantic comedy that captures the humour (and realities!) of marriage (I could see my own parents in Liza Goddard {Betty} and Russell Dixon {Donald}!)

Betty is a doting and passionate mother to her only child, Mark but is finding it hard to accept that she is about to “loose” him as his he is about to get married and fly the nest.

The play starts on the morning of Marks’ wedding, with Betty retreating to her attic, where she relives her long-lost youth and the love affair she had in the 1960s.   As she reminisces about her youth, she is visited by the memories and ghosts of her past, finding herself torn between a husband she never really loved, a son about to fly the nest and the man she shared a passionate affair with. 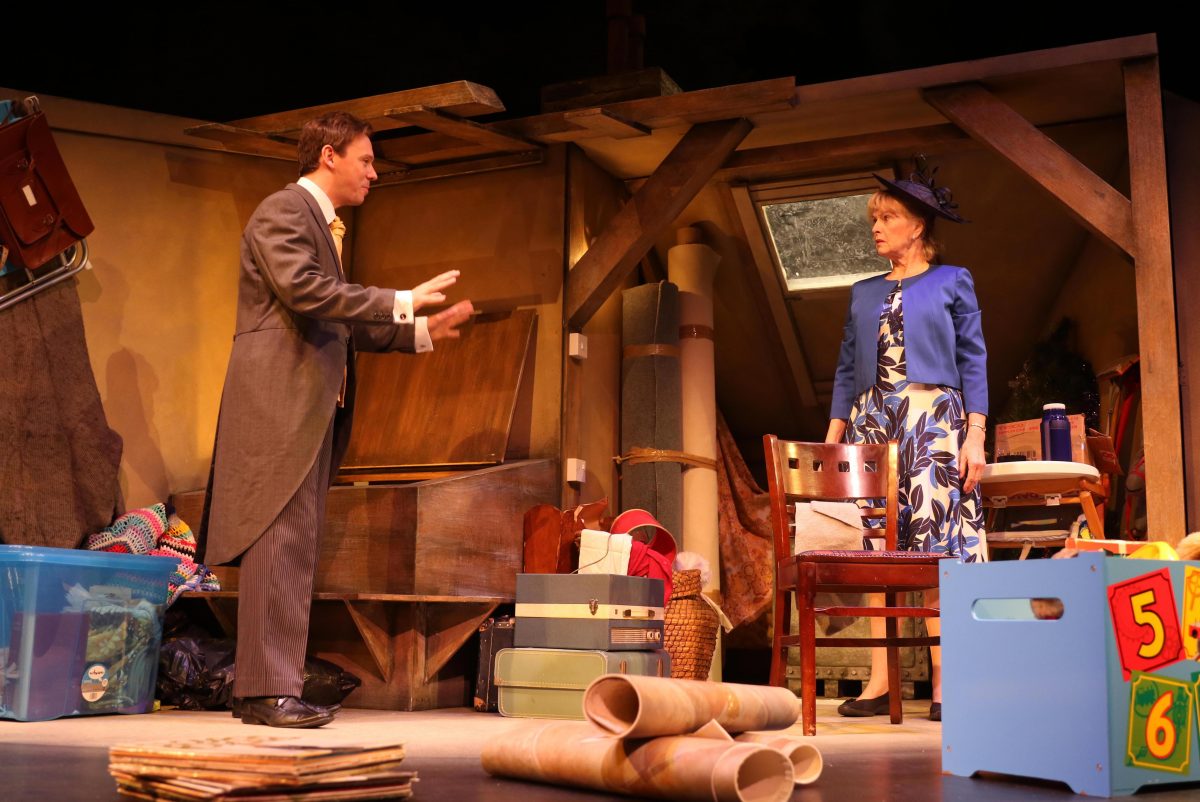 As we meet Betty in the opening scene of Act One, she is dressed as Mother of the Groom, but finds herself drawn into the attic as a way of distraction from her anxieties of letting go and saying goodbye to her son, which she fears will only highlight the fact that she is unhappy in her marriage to Donald.  Barricading herself in the attic, son Mark eventually manages to talk his way in with her but instead of leaving for the wedding as he pleads her to, she begs him not to leave her – “How will I know how many milk bottles to order?!” and tries to put him off the idea of marriage “Well she can’t cook!” (referring to his soon-to-be Wife, Jo).  As the pair starts to bicker, Betty rummages through an old suitcase and digs out a dress she wore in the Sixties.  To Marks’ horror she removes her wedding outfit and puts on the old dress – asking Mark to fasten it up for her.   Trying to use this to coax her back downstairs for the wedding, Mark asks her to “go show Dad” to which she retorts, “I didn’t put it on for him!”  Putting on an old record “Secret Love” (from Calamity Jane), the two share a comical dance but are distracted by husband Donald banging on the loft hatch.

Acting as the Narrator so to speak, Betty takes us through her youth, her love affair and her marriage to Donald and Marks’ birth, all the while whilst Mark and Donald are fretting below about the wedding she is still refusing to come down to attend.

Act Two is set 20 minutes later from when Mark and Donald last tried without success to coax Betty back downstairs, with guests arriving up the road ahead of the wedding, time is running out, and Mark and Donald feel that Betty may have finally lost the plot!   Will they coax her down to make it to the wedding on time, or will Betty have her own way (for once) and take a stand?

Liza is delightfully entertaining as Betty, making the audience laugh out loud with witty lines and insults. Supported by Antony Eden as her stressed out son and annoyed and hated husband Donald (Russell Dixon.)

It was wonderful to see Liza and Antony Eden reunited on stage again after the wonderfully entertaining “Relatively Speaking” earlier this year – the pair together share such a magical chemistry.

The play kept the audience in suspense from start to finish with an ending that makes you want to give Betty a pat on the back for listening to her heart for a change. Absolutely fantastic!