Part of the ‘Of Woman Born’ season and based on the real-life events of Agatha Christie and Margaret Rutherford, the world premiere of Murder, Margaret and Me explores key moments in both women’s lives through the eyes of one of Christie’s most enduring characters, Miss Marple.

Sensitively written by Philip Meeks, this engaging three-hander is a well-structured and original piece of theatre that leaves the audience guessing right until the end. The ghost-like presence of ‘The Spinster’ aka Miss Marple is the catalyst for the story, whilst an interesting mix of reality and fantasy keeps this piece moving at an appropriate pace. Indeed, in many ways its pacing and structure echoes Christie’s own writing, as from a relatively slow beginning it gathers speed and builds to a satisfying climax and denouement. 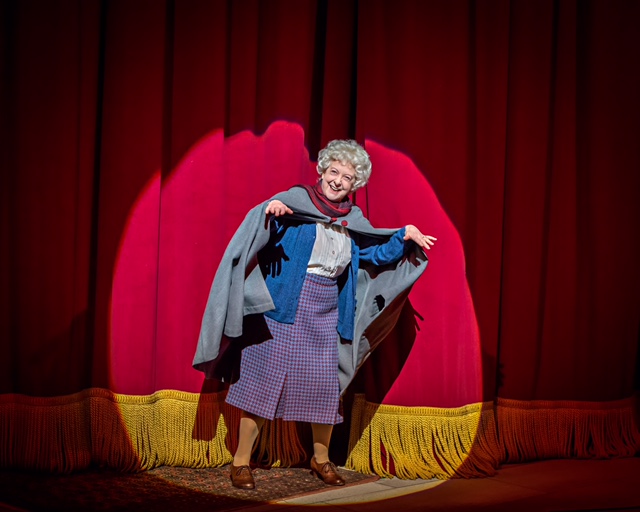 The set design and direction had a very contemporary feel to it and complemented the style of the writing very well. Changing the scenery from film sets to front rooms through the use of moveable flats that were visibly moved around the stage by traditional scene shifters really added to the blurring of reality and fantasy that the two characters were experiencing throughout the story.

Andrina Carroll portrayed the seemingly gentle and unobtrusive spinster. Her gentleness of speech and action was contrasted with sudden outbursts of frustration and steeliness which demonstrated the strength of character and insightfulness that was bubbling just under the surface. Both Agatha Christie, created with astonishing believability by Nichola McAuliffe, and Margaret Rutherford, performed with fragile determination by Susie Blake, were gently manipulated by The Spinster throughout. Initially the relationship of the two celebrated figures comprised a lack of understanding and a degree of animosity towards each other. However, as Christie found out more about Rutherford’s demons, so the friendship between the two ladies developed, with both able to confront their pasts and find respect and affection for each other.

Overall the piece balances its moods very well, shifting from laughter-inducing comedy to chilling revelations and back with ease. The audience quickly formed attachments to the two main characters and, although it took slightly longer to fully understand the character of The Spinster and her role within the piece, this did become clearer as the play progressed. This is a slick and structurally interesting piece with strong performances from all three cast members. A definite watch for anyone who has an interest in Agatha Christie and/or Margaret Rutherford.

Over the course of the evening I learned a lot about the lives of two intelligent, successful and private women who learned to challenge their prejudices and not to judge a book by its cover.

The production in one word: absorbing