The story, set inside a country house, is about Andrew Wyke (Miles Richardson), an established mystery writer, who is obsessed with fiction and playing games. Wyke entices Milo Tindle (James Alexandrou), his wife’s lover, to his house and talks him into staging a burglary to steal his wife’s jewellery.   This leads to a chain of events where the audience is invited to work out whether it is Wyke’s fictitious imagination influenced by intensified game-playing or if its revenge because of the affair between his wife and Tindle. 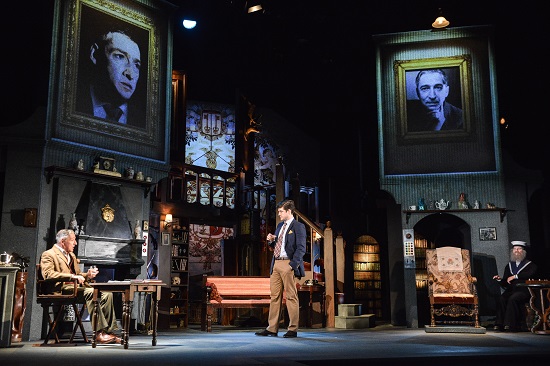 With a dramatic turn at the end of Act One it leaves the audience wondering and pondering what will happen in the second act. The second act continues on with the intense farcical game of cat and mouse between Wyke and Tindle. Tindle this time appears to have the upper hand after claiming that he was involved with the murder of Wyke’s girlfriend. He instructs Wyke with clues to find the evidence. The cunning plot is infiltrated with riddles, codes and games playing.

Barney George’s magnificent staging is a masterpiece in its own right and operates mechanically from a press of a button. There is a co-ordinated movement of furniture and space during the different scenes which doesn’t give a feeling of the stage being cluttered. There is great use of Simon Wainwright’s visual projections, particularly for capturing the activity outside when Tindle breaks into Wyke’s home, part of the “staged” robbery. The lighting, courtesy of Alexandra Stafford, compliments the story’s mood and thrilling ambience.

Miles Richardson, an established actor, gives a first class portrayal of Wyke and creatively projects his role with dry humour, factual irony and innuendoes. James Alexandrou equally gives a stellar performance as Tindle and how he challenges Wyke’s vivid imagination and brutal reality of the events that have happened.

Wyke at the beginning of the play was writing about a murder that took place at the tennis courts and the reference leads Tindle concluding with “Game, Set, Match”. He indicates that he has the final and overall upper hand over Wyke. Or does he?

Shaffer’s clever approach to Sleuth when he wrote the play is to make sure the audience is challenged to solve the twists and turns and its conclusion. Giles Crofts directs this production with a similar uncompromising vision; a deserving thriller with a great cast and talented creative team.