The Importance of Being Earnest - Theatr Clwyd, Mold

Teacakes, tantrums and total tomfoolery- one thing is for certain, Theatr Clywd’s ‘The Importance of Being Earnest’ has it all. With mistaken identity, cups of tea and a beautifully executed plot twist, this production brought sparkle and sandwiches to Oscar Wilde’s timeless classic text.

Set between the two contrasting worlds of aristocracy; the hustle and bustle of a high brow London townhouse and a tranquil country house, the play focuses upon two bachelors, Algernon Moncrieff (James Backway) and John Worthing (Matt Jessup), desperately trying to win the affections of their sweethearts, Cecily Cardew (Robyn Cara) and Gwendolen Fairfax (Emma Denly) under the false persona of ‘Earnest’. However, with a few twists and turns, their plans don’t always play out the way they had imagined.

The production was directed by Richard Fitch (assisted by Francesca Goodridge) who created a wonderful reinvigoration of the 1800’s text. Whilst playing to the style and grandeur we all know and love when going to see a Wilde play, Fitch ensured this production spoke to every generation and had obviously placed a huge emphasis on allowing his wonderfully talented actors the space and support to play within their roles. Fitch’s production was engaging from start to finish, and I was even sat next to a woman who had seen the show twice already and was so impressed, she’d brought her friends along to share the show with them. 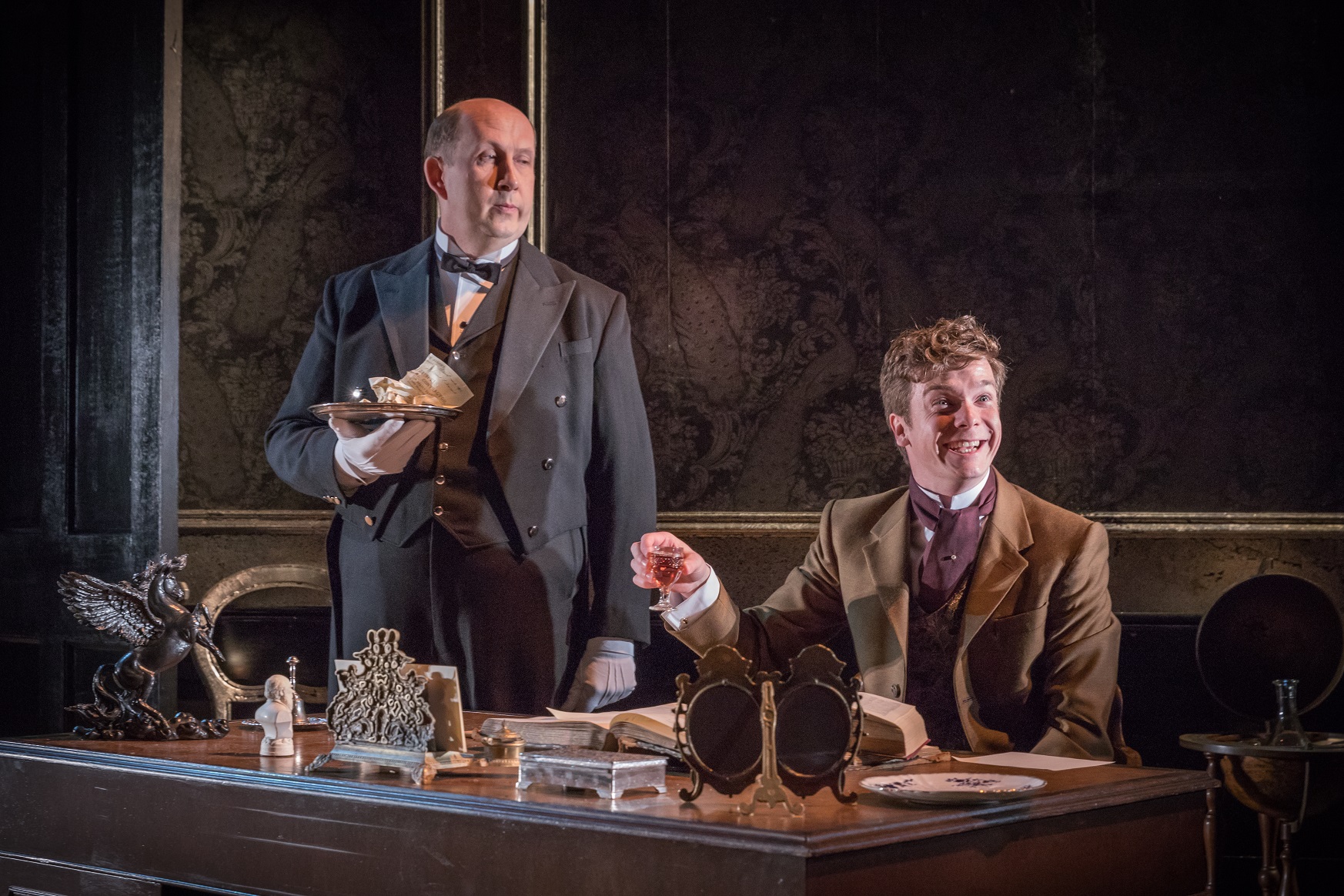 James Backway as Algernon was sensational. Backway brought pure joy and life to the cheeky, self-absorbed character. His grasp of comic timing made him so watchable and Backway always drew the attentions of the audience (for ALL the right reasons). It must also be noted that this incredibly talented actor has a secret talent of eating and hoarding a large amount of bread- something that only added to my amazement and embracement of his performance.

The role of John, played by Matt Jessup was also of an incredibly high standard. Jessup displayed such an ease and comfort on that stage that would be envied by any actor and his repartee with Backway was second-to-none. Jessup was suave, cool and outright hilarious and brought a brilliant energy to the role.

The two ‘sought-after’ ladies must also be congratulated on their contributions to the production. Emma Denly (Gwendolen) had a presence on stage that can never be taught to an actor. She was powerful and played the blissful ignorance of Gwendolen perfectly. As a very recent graduate from RADA, this actress is one with a very bright and colourful future and was the perfect casting in this production.

Robyn Cara (Cecily) also brought a youthful energy and glow to the role that is often neglected in productions of the show. Fitch truly explored the idea of her naïve, young nature in order to create a character that was interesting and dynamic. This pairing worked beautifully together, especially during Act Two in which these two actors showed true comedic skill in their ‘afternoon tea’ scene.

However, the underdog of the cast was definitely Nick Harris (Laine/Merriman). Harris provides a masterclass in creating such brilliant characters and particularly in the role of Merriman, he exudes pure showmanship, even getting an applause mid-way through a scene for his comedic genius.

Along with a beautiful and cleverly manoeuvrable set, designed by Lee Newby, this laugh out loud production transported a North Wales audience into the spectacle of 1800’s English society and left me with a smile on my face and a sudden hunger for cucumber sandwiches…