It's exactly 124 years and 1 day since The Nutcracker first had its premiere at the Mariinsky Theatre in Saint Petersburg and now after all this time; it's still a family favourite, it's come to us in many different guises over the years from Barbie to Ballet and everything in between and tonight it's that in between that I'm going to see, moving away from the conventional, the been there done that for 124 years, tonight at Clwyd Theatre in Mold, it took a very different, very exciting form.

Theatre is always needing new ways to fight against the ever increasing media that can be watched or streamed into ones living room but one thing that no streaming service in the land can offer; is the chance to be a part of the show, to live the art.

It's hard to explain exactly what you experience when you put the VIP lanyard round your neck and venture up the stairs accompanied by a colourful character into a warren of weird and magical experiences, it's hard to explain because I'm still wondering if it was all a dream because it certainly had all the makings of one.

From the fantastic sets, to the larger than life characters and outfits, to the emotions and the participation; it felt like nothing I had experienced in a theatre before.

I don't want to give the story away even if it is 124 years old and I don't want to give the magical bizarreness of it away either, but what I can give away is; a wonderful cast which worked so hard to make sure everyone was part of the show as it unfolded around your very eyes, special mentions have to go to Victoria Pugh who played Francine Silvertree who put on a fantastic wickedly performance, Josh Sneesby who played the role of Uncle Roy was completely dedicated to his role so much so that he was still in character at the bus stop when you were leaving on your way home, to be honest though; the whole cast were absolutely fantastic and although there is too many to list everyone, everyone deserves praise for this, it's a triumph! The leading role of Billy Silvertree was played by the wonderful Sophie Coward who had everyone convinced that she WAS Billy Silvertree.

To describe this show as a play would be a huge underestimation for something which is so submersed and involved, this is a piece of art which you are a part of, I was unsure how well younger children would take to this as it is quite a daunting experience when it's first presented to you, but to be honest the children in the group took to it even quicker than the adults did and thoroughly enjoyed it, it's a fantastic family experience which even includes the chance to skate on the ice at the ice rink to the side of the theatre.

It's unusual, it's fun and it's something you'll be talking about all Christmas! 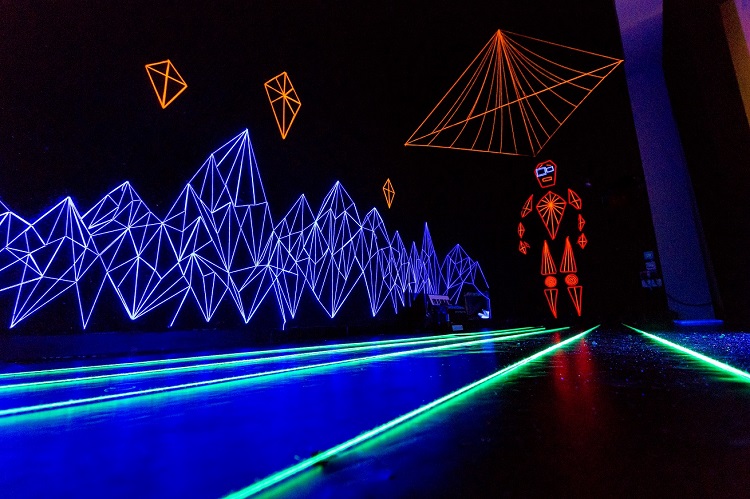