One of my first ever trips to the West End was to see Buddy – The Buddy Holly Story nearly 30 years ago and tonight brought back many nostalgic memories as I got to relive the show once more at the wonderful Regent Theatre in Stoke.

Buddy charts the incredible rise to fame of Buddy Holly from a country singer from Lubbock Texas to one of the biggest rock n roll stars in the world before having his career cut painfully short on the 3rd February 1959 at Clear Lake in Iowa. Ritchie Valens and JP Richardson known as The Big Bopper also died in a plane crash following the Winter Dance Party concert where the trio performed. Pilot Roger Peterson also perished. 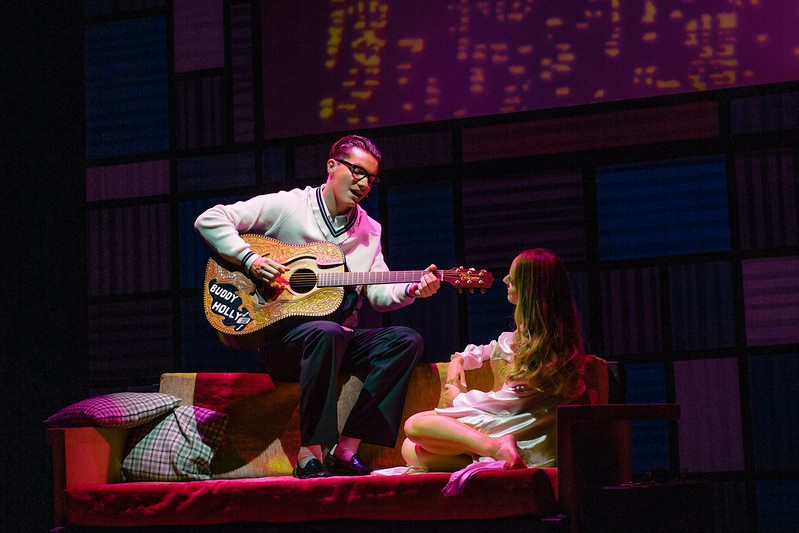 This version celebrating 30 years of the show is stripped back slightly from the original and simplified in its presentation. The sound was superb, however the lighting was a touch clunky at times with colour changes harsh, especially during the final concert scene. This in no way detracts from the superb actor musicians on stage who gave everything from the first till the last moment of this feel good show.

A J Jenks takes on the lead role tonight looking every inch the superstar giving a faultless performance. His interactions with his band The Crickets and Maria Elena (Hannah Price) who later became Buddy’s wife depicted clearly the bond they had with each other.

Joshua Barton as the larger than life Big Bopper commanded the stage whilst Miguel Angel was an audience favourite as hip thrusting Ritchie Valens. Harry Boyd took on a number of guises during the night including Texas radio DJ Hipockets Duncan. At times Duncan’s accents as he took on other roles were a little over the top for me and made him hard to understand at times.

The whole ensemble of 9 play numerous roles during the show with the Apollo Theatre scene being a particular highlight.

The show retains all of its charm I first witnessed at the Victoria Palace in London all those years ago even if the opening night audience in Stoke tonight were a little reserved and not dancing in the aisles until the final number which brought the whole theatre to its feet. The show maybe 30 years old, but the music never ages.

Buddy continues at the Regent Theatre until Saturday. Grab a ticket and dance the night away to some of the best rock and roll music ever written. https://www.atgtickets.com/shows/buddy-the-buddy-holly-story/regent-theatre/