The Marriage of Kim K - The Lowry

I wasn't sure what to expect when entering the theatre for The Marriage of Kim K. Having heard nothing of the production beforehand, I was thinking it was going to be a narcissistic celebration of the Kardashian Klan. But, boy was I wrong...

Accurately portraying the trials and tribulations of three couples at varying stages of their relationship, this 1 hour 55-minute production follows Amanda and Mike (a modern, everyday couple who fight over the remote), the eponymous Kim K and her ill-fated husband Kris Humphries (a celebrity couple who fight over which lavish parties to attend), and the humorous Count and Countess Almaviva, a 16th century couple from Mozart's The Marriage of Figaro (who fight over just about everything).

I was sceptical about the parallels you could draw between an everyday couple, a celebrity couple, and a fictitious couple in a 16th century opera. But somehow, despite the nuances - it works, it shouldn't, but it does. 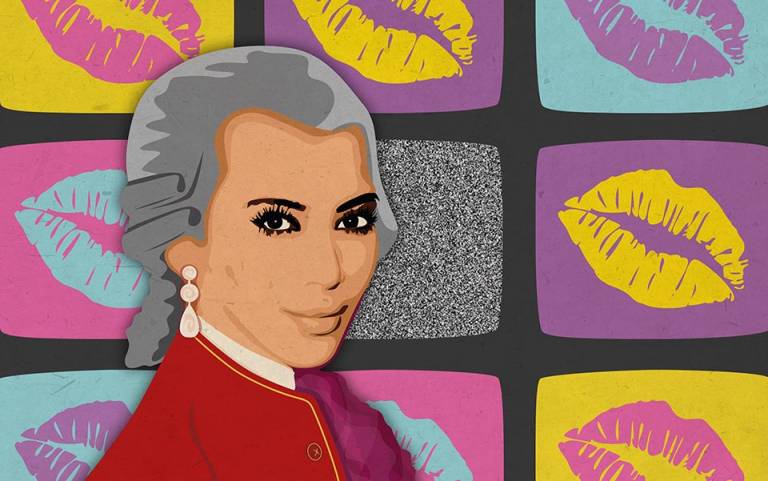 A clever theatrical device, the modern couple acts as a bridge between the past and the present, with Amanda fixated on today's celebrity culture, whilst Mike is an old romantic who loves the classics of another era.

Despite their differences, the couple hilariously echo the truths of modern life - coming home after a long day, flopping on the sofa, and, to take a line from one of the musical numbers in Act 1, "All you want to do is watch TV, TV, TV, TV". It's modern life down to a tee.

The raucous laughter in the audience signalled their approval: we were all in the room thinking one collective thought - "It's so true!" So relatable, so real. How many times have we argued with our partner about what to watch on TV?

That's where Kim and the Count come in. Almost in a parallel to Gogglebox, the audience are watching Amanda and Mike watch Keeping Up With The Kardashians and The Marriage of Figaro on TV - and you know what? It works.

Why? Because each couple have one common denominator - being in a couple. Whether you're bickering about different tastes, whether you're annoyed your other half spends more time focussed on work than on you, or if your partner has a wandering eye - these are all issues facing couples across the ages. And they're still as prevalent - and relevant - in the 16th century as they are in the 21st century.

Passion. Love. Betrayal. Lust. Suspicion. Heartbreak. Music. These things all transcend time, and the way these juxtaposing elements were portrayed on stage by way of the different generations interacting separately and together is masterful.

Although each of the six cast members deserve a mention, for me there were three standout performances.

The Count, played impeccably by John Leuan Jones, in some parts stole the show thanks to his superb voice and his even more superb physicality on the stage - his facial expressions more than once had the audience in stitches.

In contrast, Charlotte Trepess was the perfect person to bounce off Jones, playing the role of his wife The Countess to perfection. Her voice - honed at the Royal Northern College of Music - was spellbinding, truly bringing the majesty of the opera to life.

No review of this show would be complete without a nod to the show's main protagonist Kim K, played magnificently by Megan Postle. Again her voice was superb, and she nailed the egocentric hair flick popularised by the Kardashians to a tee.

In short, this production is a funny, engaging and brilliantly written social satire that definitely hits the right notes - after all, only good writing would actually make me feel sorry for the billionaire Kim K.