We all think we know Tudor history don’t we? It’s one of the periods still taught consistently in school and the recent TV adaptation of ‘Wolf Hall’ has made the characters of Henry VIII, Thomas Cromwell and Cardinal Wolsey vivid in our imagination. We even have a hit musical (Six), based on the lives of Henry’s wives, currently playing to sold out audiences in the west end.

Part of our accepted understanding is the role played by Anne Boleyn, the scheming minx who tempted Henry into her bed, in the process causing the Reformation and establishment of the Protestant state in England. This play seeks to examine Anne as a more rounded character than the ‘whore witch’ of legend, giving us pause for thought and a re-examination of her place in our national consciousness. 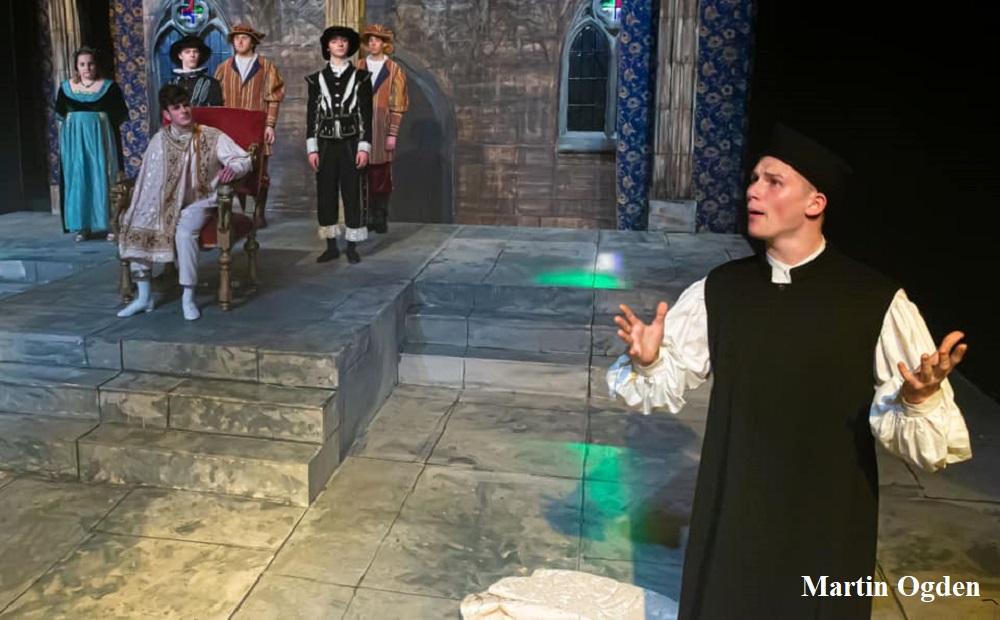 Howard Brenton is chiefly known for political writing; he forensically examines the state of the nation and world events with a caustic pen and it is easy to draw parallels between the divided court of Henry VIII and the current state of British politics. High ideals of nation and state being sacrificed for personal ambition are present in both, with betrayal, secrecy and lies the necessary tools of the political trade.

Brenton chooses to enter the story in 1603, seventy years after the events took place, with James I (Tom Davies) newly installed on the English throne, discovering the clothing and Bible of the disgraced Anne (Olivia Brindley) in a trunk. Her ghost appears to the audience, carrying her own severed head, and proceeds to unfold the story of her rise and ultimate downfall at court to us. In her story, she is not manipulative, scheming and adulterous; rather she is innocent and a devout secret Protestant, who wishes the teachings of Martin Luther and William Tyndale to become more widely understood. In this treasonous aim she is aided by Thomas Cromwell (Luke Robinson) who uses Anne to both establish the new church and promote his own career. Anne is pursued relentlessly by the besotted Henry (Marley Fenton) until she relents, marries and produces a daughter. Her bloody fate is sealed by both Cromwell’s betrayal and her own inability to give Henry the son he craves.

Director Joseph Meighan portrays a wholly believable Tudor court, aided by a talented group of creatives and excellent cast. The stunning set design of Lewis Downham invokes a high church setting, you can smell the incense on your arrival into the theatre and is perfectly complimented by the sumptuous costumes of heavy silk and fur. The atmosphere is rendered complete with the choral musical interludes from the supporting cast, original 16th century lyrics with new music added by the estimable Neil G Bennett. Throw in some stylish choreography by Claire Grant and the staging puts many professional productions to shame.

The cast match the surroundings with excellent support provided by Zeinab Al-Jeddah as Lady Rochford and Max Race in the role of Wolsey. Fenton gives Henry a grace and tenderness which is in keeping with his reputation as a young Renaissance prince, rather than the fat older King we are used to seeing portrayed.

Robinson grows in confidence and maturity with every new performance, his Cromwell was both sly and bullying and he expressed the complex text with clarity and nuance. The strongest scenes were those he shared with Brindley as the eponymous Anne, who delivers an absolutely superb performance. Both the emotional range demonstrated by such a young performer and her clear understanding and delivery were very special. Added to this was a physical vulnerability she was able to bring to the character; she touches her stomach whilst the dead foetus of her (male) child is held by Henry knowing it sealed her fate, as Jane Seymour stands in the background.

The piece dropped in both intensity and clarity when we visited the Jacobean court and most of the humour of the character of James was unfortunately lost during these scenes. Brenton has purposefully peppered the play with humour to lighten the heavy exposition and it was a pity this facet of the writing did not shine through.

By the conclusion, the audience leave the theatre with a wholly new perspective on a well-known tale, looking at the past from a feminine perspective.

Anne Boleyn tells us her version. Her-story rather than His-story.

Verdict: Pendleton School of Theatre consistently produce work of the highest quality and this opening to the new season gets us off to a flying start.