Burnout was written by Selina Helliway and originally appeared in 2018 as a short piece, but has been extended and is here presented as a full length, two act play. It is set in the small hours in a twenty-four hour gym, where the staff and members are reeling from the disappearance of Raf, a man who touched all of them in some way. Raf understood and connected with people, he was likeable and seemed to provide a lifeline to many of the disparate characters who frequent the gym.

First out is Jack (Steven Digwaney), a posturing, broad-speaking northerner, who is loud and aggressive, but had found a friend and a stabilising influence in Raf. Dan (Gareth Morgan) is a personal trainer who has the hots for client, Elise (played by writer Selina Helliwell), who is – on the surface – bubbly and flirtatious, attractive and superficial, but underneath she's deeply unhappy. 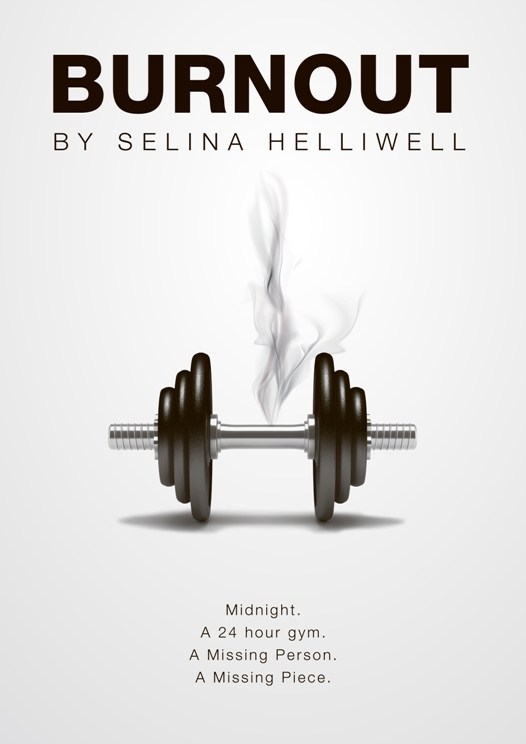 For some time Elise feels she’s been going through the motions, almost sleep-walking and she no longer knows who she is. She realises the only thing that makes her feel truly alive is working out at the gym. Last night, her boyfriend of seven years, Tim, asked her to marry him and it has forced her to take stock of her life and her situation. She broke up with him and quit her job. Tonight, she avoids the issues in her life by endlessly pumping iron.

Tim (Christopher Sutcliffe) shows up at the gym; he is distraught, willing to do anything to rekindle his relationship with Elise, except perhaps be himself. He is a sad character but endearing and very funny. Sutcliffe flicks effortlessly between anger and desperation, and Tim’s awkwardness provides a fair amount of very nicely acted and acutely observed humour.

Gym worker, Susie (Mary Taylor), spends most of her shift in the toilet snorting cocaine. She has an excellent line (no pun intended) in comic timing and quick-fire delivery. Colleague Megan (Lana O’Kell) and her girlfriend, Becky (Brigit Uzodinma), complete the talented ensemble.

The disappearance of Raf provides a linking story arc, which allows the characters to express their vulnerable sides. Raf is set up as an almost mystical character, with the power of insight, who has affected everybody and enriched their lives in some way. The mystery surrounding his disappearance is compelling.

The first act comes to an end and leaves the audience intrigued. The acting is naturalistic, the actors are engaging. The story is tragic and funny, often at the same time. It’s fair to say that at roughly an hour, it was on the long side and some of the dialogue wandered a bit, but on the whole it was hugely enjoyable, and had massive potential. If the play had ended there, I would have given it four stars.

But it didn’t. After the interval I felt it lost focus somewhat, or rather gained a less interesting focus, in the potential romance between Elise and Dan. To a degree, some of this felt like padding, and I wonder whether in extending the play from a short, some of its potency has been diluted, because many of the conversations seem to be going over old ground and the much more interesting subject of Raf’s disappearance is very much left on the backburner. Despite this, the second act still contains much to entertain, especially Christopher Sutcliffe as Tim, who very credibly displays a range of emotions and invokes a lot of pity. He is hilariously funny when he starts retching whilst trying to make an impassioned speech to his lost love, Elise.

Throughout the play, there are dark overtones of mental illness, suicide and despair. Raf is one of the countless thousands who go missing and are never seen again. Everyone is adamant he wouldn’t commit suicide, because he was “too full of life”, leading us to the moral of the story: people who are outwardly happy are not always inwardly happy. It’s good to talk and get your feelings out there.

Burnout is a great concept. It is both touching and laugh out loud funny, though it would certainly benefit from being shorter and tighter, as there were times when I felt it was treading water, but there is a lot of talent on display here in the very strong performances and perfect comedic delivery, as well as the added layer of poignancy from the thought-provoking issues.