How much do you really believe in Equality and Diversity? Sherri Rosen- Mason (Alex Kingston) and her husband Bill (Andrew Woodall) are fully committed to the cause. As head of Admissions at a predominantly white school in New Hampshire, Sherri works tirelessly to boost the population of 'students of colour'. She is unwavering in her commitment to affirmative action and her world view is firmly entrenched within a liberal leftist standpoint.

So, when her son Charlie (Ben Edelman) narrowly missing out on a place at Yale whilst his friend Perry is accepted, Sherri is placed in a dilemma. Perry is from a mixed race heritage and classified as black, leading Charlie to believe that he has been the victim of the very positive discrimination that his mother so firmly espouses. How the family and their friends react to this subversion of their white privilege is the subject of this thought provoking satire by writer Joshua Harmon. 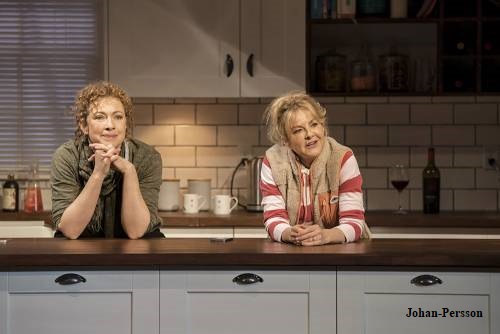 Harmon is lacerating in his condemnation of the smug, liberal intelligentsia in the US, who anguish about the rights of the downtrodden but will quickly move to protect their own positions of privilege. It is fertile territory and feels relevant to a Britain in 2019 that is polarised by class to a far greater extent than the United States and the writer subverts the natural sympathies of this predominantly middle class audience from the outset. When Charlie gives a speech of such breathtaking entitlement upon finding he was unsuccessful, you feel like cheering his father when he delivers a few home truths back to him. Charlie's story arc then traces through repentance of his status and privilege to a point where he forces his parents to confront their own assumptions and prejudices.

My chief criticism is that throughout the dialogue feels like a series of political diatribes designed to make a point, rather than a naturalistic conversation between family or friends. Consequently, the characters feel crudely unsympathetic, Sherri's work colleague Roberta (Margot Leicester) is drawn as a relic from an era when diversity wasn't on any agenda, whilst her husband Bill manages to appear both cold and smugly pleased with his position in the world. This lack of warmth that is inherent in the writing, makes it difficult for an audience to invest any emotion as the piece reaches its conclusion.

Given these limitations, both Kingston and Woodall convey the gradual unravelling of middle class certainty with dexterity, and following a bombastic opening, Edelman gives Charlie a sense of real teenage angst. Set design by Paul Wills is limited to a perfect facsimile of a New England kitchen, the lack of any necessary scene changes or interval meant the whole production was brought to a conclusion in less than 100 minutes by Director Daniel Aukin.

Undoubtedly, this play has something worthwhile to say on ethnicity, class, wealth and education in the US, but some crucial elements are seemingly lost in translation, leaving us with a heavy handed swipe at an easy target.