An Evening of Eric and Ern at Christmas - The Lowry, Salford

Eric and Ern...as English an institution as drinking tea and complaining about the weather.   It is a fine testament to these two giants of British comedy that even though it is almost four decades since they last performed together, people want to relive their hilarious sketches and jokes (“fancy a cup of tea, Ern?”)

Eric and Ern are played by Jonty Stephens and Ian Ashpitel respectively.   They have been performing as Morecambe and Wise for over five years and they have honed their act to perfection.   Tonight was like seeing the genuine double act and it was very nostalgic and quite moving really.

Most of us have fond memories of the Morecambe and Wise Christmas show which really was the highlight of Christmas Day for part of the 1970s and 1980s and that kind of humour, talent and ability will never be recreated by any of today’s performers and comedians (in my humble opinion).

Tonight’s show consisted mainly of the stand-up routines between Eric and Ern. There were also some song and dance routines and a female guest singer (Becky Neill). I was secretly hoping they’d recreate the kitchen “The Stripper” sketch but this would be a very big ask! 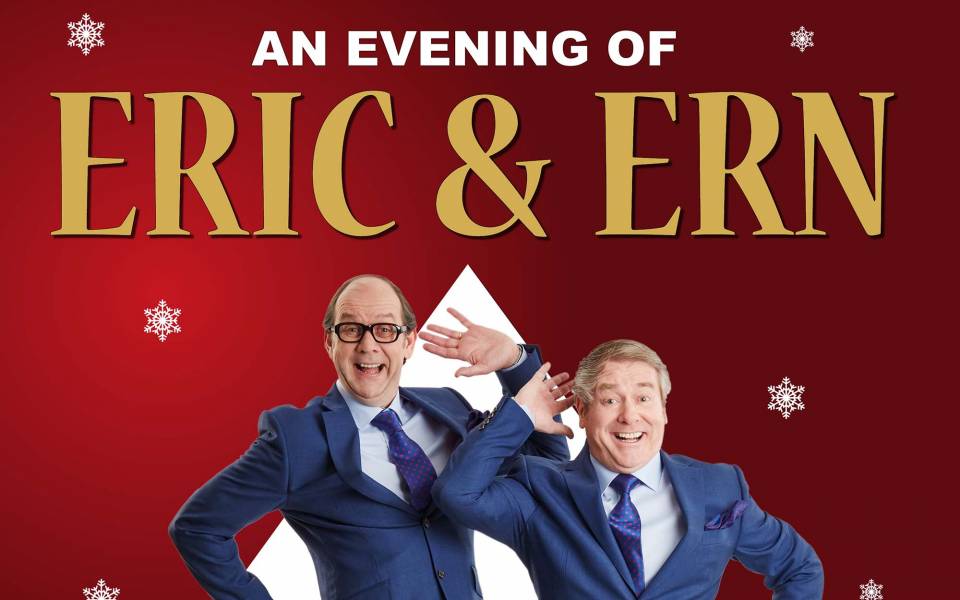 I liked the set and the atmosphere in the auditorium:   the music being played was the type of music Morecambe and Wise would sing to – easy listening, crooner type songs – and on stage was a Christmas tree and the famous ‘MW’ red curtain.

As soon as the duo came on stage, it was like stepping back in time.   Morecambe and Wise were there in front of us.   It was quite extraordinary. Jonty Stephens IS Eric Morecambe.   He has clearly studied every mannerism and every facial expression and nuance because it was uncannily accurate.   Ian Ashpitel has Ernie’s ‘straight man’ poise and delivery, his cheeky head wobble and his outraged manner of speaking when Eric isn’t behaving himself.

As for their song and dance routines, they were performed perfectly: “Pretty Baby”, “Positive Thinking”, “Following You Around” and of course....”Bring Me Sunshine”.   I couldn’t take my eyes off them as every step was 100% authentic Morecambe and Wise.

Stephens and Ashpitel deserve extra credit also because the stand-up routines that we saw Morecambe and Wise do on their shows would be a few minutes long and then there would be sketches or musical numbers.   The stand-up routines in tonight’s show practically made up the whole show, particularly in the first half.   There has to be a constant quick-fire repartee between them and they delivered this faultlessly, never losing that Morecambe and Wise magic.

There were two highlights for me tonight: the André Previn sketch (featuring “Grieg’s piano concerto by Grieg”) and the infamous brown paper bag routine when Eric pretends to throw something in the air and catch it in the bag.   The André Previn sketch was very cleverly adapted “because Mr Preview can’t be here tonight as he’s appearing at The Argyll Theatre in Birkenhead” and it worked brilliantly. The biggest cheer of the night came when Eric grabbed Ernie’s lapels and said those much anticipated lines: “I’m playing all the RIGHT notes....just not necessarily in the RIGHT order”.

You couldn’t possibly capture all of Morecambe and Wise’s comedic brilliance in one two-hour show but Stephens and Ashpitel did their best tonight to cram as much in as they could. I liked the references to past celebrity guests, as well as the many punchlines they included.

To finish a wonderful evening, we had their poignant signature song: ‘Bring Me Sunshine’ - performed by them in white top hat and tails.

This was a lovely trip down a very nostalgic memory lane and a perfect Christmas treat – just as the Morecambe and Wise Christmas show always was.   It reminded me how much they are missed but what a wonderful legacy of comedy they left behind. It was a privilege to see the show tonight and it made me remember how we watched a sketch which had two men in bed together and no-one thought there was anything suggestive about it - because it was Morecambe and Wise.

Gone but not forgotten – thanks to the outstanding talent of Jonty Stephens and Ian Ashpitel. And you can’t see the join!