Titanic: The Musical - The Lowry, Salford

Titanic docked in Salford Quays this week at The Lowry, playing until 12th May as a touring revival of this 5 time Tony award winning musical. When it was first staged in 1997, it undoubtedly benefited from the almost simultaneous release of the Leonardo Di Caprio/Kate Winslet blubfest, which garnered 11 Oscars and took $1.9 Billion at the Box Office. Over twenty years later and despite a new coat of paint, this stately old ship has some serious rust issues.

The story of the sinking of the largest passenger liner in the world on its inaugural voyage to New York in April 1912 with the loss of over 1,500 lives, is hugely well known. It has been represented many times on stage and screen with varying degrees of accuracy and success. This production uses the story to examine the class system that was all pervading in Edwardian society and how that impacted on the individuals who sailed to their doom on RMS Titanic.

We are introduced to a myriad of characters as they board the ship in Southampton, each in their own separate class 1/2/3, as well as the owners and crew of the ship. All of them has a differing reason to be sailing and these individual back stories are sketchily laid before us during the opening number. This lack of early character exposition makes it difficult for the audience to engage fully with them and develop a sympathy for the later jeopardy they find themselves in, the sheer number of principal characters is overwhelming in such a short scene. 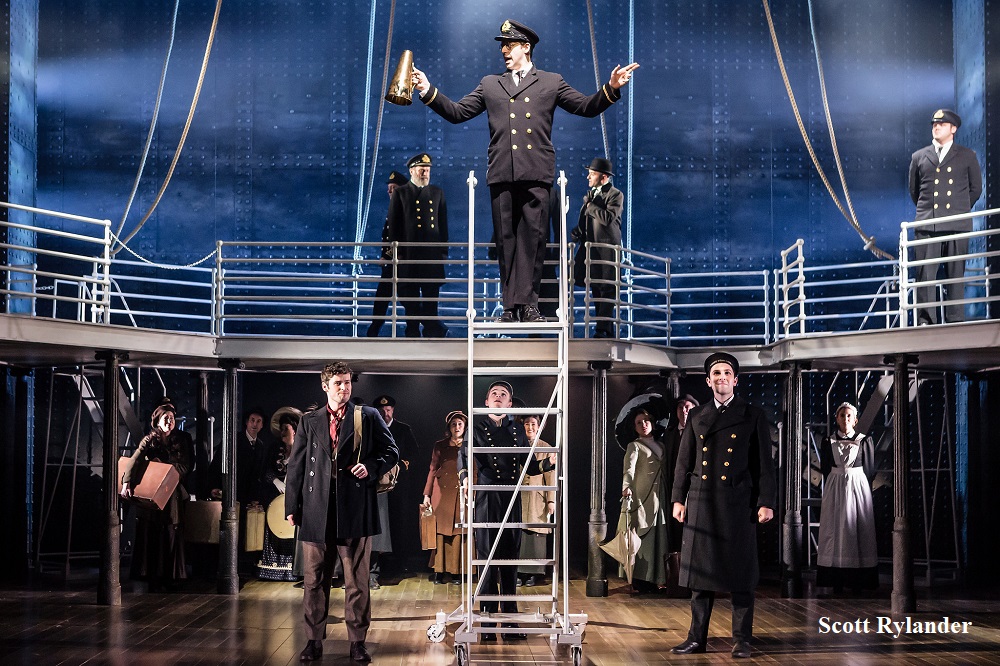 We meet plucky Kate (a feisty Devon-Elise Johnson) who dreams of a new life as a ladies maid, Alice Bean (Claire Machin channelling Hyacinth Bucket) who sees the voyage as a method of improving her social standing and Isidor Strauss (a relaxed Dudley Rogers) and his wife, as the patrician politician and kindly toff. These are three examples of stories that would have been fascinating and better drawn with more stage time, but instead are quickly moved through to allow the next vignette onstage. A similar fate it handed to most of the parts throughout the show, which leaves the uniformly excellent actors in the cast with little to develop and this reviewer feeling that a more defined hierarchy of character would have offered more clarity, structure and flow.

The first act builds to a conclusion as the reasons behind the ultimately calamitous decisions in route taken and speed are brought into the story through the songs such as 'What a Remarkable Age this is'. The style adopted in the music and lyrics by Maury Yeston is redolent of both Gilbert and Sullivan and Ragtime and is excellent at conveying the place and time setting. A criticism would be that the piece falters with too much early plot development being unnecessarily and unconvincingly sung where simple conversation may work better in these scenes. The inevitable collision with the iceberg is staged simply without recourse to special effects, as the first act is brought to a crashing end with 'No Moon' eerily sung by the company as the stage goes black.

The tension of the sinking and aftermath are dealt with following the interval, and the shorter Act Two attempts to convey frustration and dawning realisation that most of the passengers will not escape in the insufficient lifeboats provided. The dramatic conclusion is slowed by the musicality of the show with the inconsistent style of the songs breaking the tension before it is forced to build again. Some of the dialogue is just wooden, the First Officer THANKING the look out when they hit the iceberg was awful and provoked an audience reaction of hilarity. However, the undoubted highlight of the evening was the survivors moving out into the audience and singing 'We'll Meet Tomorrow' back to the sinking ship on stage, this immersive technique was hugely effective and provided the emotional depth that the rest of the production lacked.

The previously mentioned lack of character development and number of storylines in the show left a lot of characters without real resolution which was unsatisfying. This was particularly obvious in the case of Frederick Barrett (Niall Sheehy), who's initial strong performance as leading man was allowed to fizzle away. The downbeat ending of the story also presented a problem for a musical theatre piece, this was only partially resolved by using a reprise of the opening number 'Godspeed Titanic' allowing the full cast to be resurrected on stage.

As one would expect from a major touring production, the staging, costume and lighting were of a high standard with the simple double height metallic structure of the ship offering flexibility which was utilised well by Director Thom Sutherland. Particular praise is also due to the 7 piece band, who manage to convey the required grandeur when combined with the wonderful ensemble singing during the chorus numbers.

Ultimately, this show fails to reach the heights it sets itself due to the lack of focus in the story being told, in turn this leaves the audience emotionally disengaged from the fate of the passengers and crew. I put this down to the book by Peter Stone, and absolve this company from any blame for the overall disjointed nature of the production. I heard several audience members commenting prior to the show that they were 'looking forward to a good cry' and they had 'bought the tissues'. As the lights went up, I saw nothing but dry eyes in the house.

Titanic -The Musical doesn't quite sink, but it is need of major repairs.

Verdict: Grandeur without the substance. The company shines despite a fundamentally flawed show. https://www.thelowry.com/events/titanic