It was a hot sultry night, no not in Madrid, but in the Lowry's Quay Theatre at the Lowry. Manuel Linan the elusive pimpernel of the flamenco world, provided the audience a delightful 75 minutes of no holds barred, toe tapping, invigorating, and mood enhancing glorious dance of the highest level.

The latest darling of the flamenco world, diminutive Linan originally hails from Granada. He stops off in Manchester for night only in the intimate setting of the Quay Theatre.

Deriving cries of ole from a British audience, you could sense he had a natural ability to pull the right chords.

Senor Linan's performance was a self-choreographed, inner exploration called 'Sinergia.' I had heard he was a little on the flamboyant side and a bit of a diva but none of this was apparent tonight.

The performance was raw, powerful, dance accompanied by a male guitarist and two male singers. 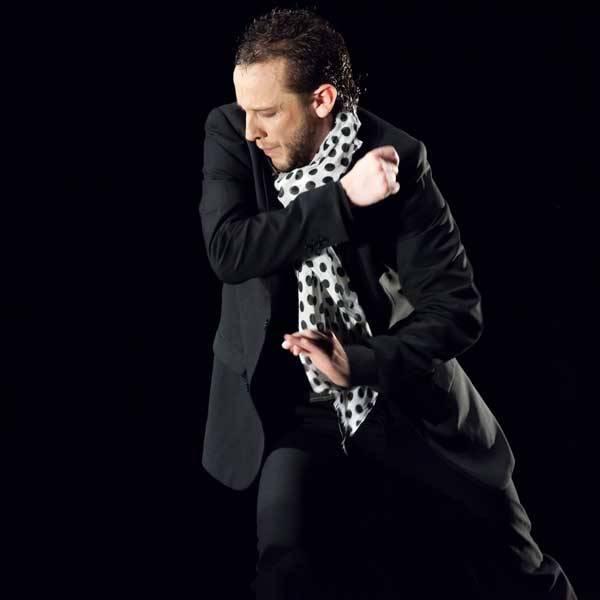 The dusty lighting and simply chairs as props was all that was needed. As Manuel's dancing feet did all the talking.

There was something mesmerising in this performance. I took my seat at 8pm and the next minute it was over in the clack of a heel. It was like being under a hypnotic spell of clacks and clicks and spinning.

Synergised with the guitarist and the singers, you were rocketed into another dimension. He successfully managed to combine classical flamenco with a stylish fusion of unique contemporary dance with the execution of a 'cheeky marionette.' We the audience were entranced and want to follow him into his Pied Piper world.

The only colour on the stage was Manuel's red neckerchief and subtle spotlights that changed from red to blue to green.

He has a few trade mark moves tonight; a hip wiggle that excites and a kind of turning round on one leg shuffle that he compliments with a mischievous glint in this eye.

His shirt change on stage (in the dark) goes from sultry black to sparkling crisp white with a suit jacket. Neither stop the sweat flying and you know he's put all his passion and soul into it.

The synergy between his fellow musicians is palpable and it felt as if I were in a cantina somewhere in the Spanish hills.

The experience itself was truly authentic. At times the light would focus on the guitarist and we were treated to some beautiful soulful classical guitar.

I felt I had no idea what would happen next and was full of anticipation egged on by Manuel's frantic toe and heel tapping and his expressive face.

I felt challenged by the fact there were no female dancers; being a succour for a beautiful dress and the romance of it all. But this was thoroughly enjoyable and riveting.

Linan seems ahead of his game. He gives a modern contemporary edge and the standing ovation at the end was a sure sign of a fabulous performance. I'm sure I'm not alone in saying I can't wait to see what he comes up with next.