The Leftovers - The Lowry, Salford

In a time where mega musicals rule the theatre world, it was nice to see something fresh. Yesterday evenings performance of ‘The Leftovers’ proved that it’s time to take a more modern approach to musical theatre. In the intimate setting of a recording studio, it was apparent that the set was simple but effective. The feeling of been in a studio within a studio, made it that extra bit special.

Writer Nick Harvey (artistic director of Sheep Soup Theatre Company) has gifted the theatre world with something special, a hidden treasure as it were. Harvey and Rob Green's artistic intention within the musical was without doubt simple but effective. Targeting all age groups, and the idea of bringing a more naturalistic feel to musical theatre.

The show follows the story of five friends who want to pay tribute to their late friend Jodie. They decide to use music as a way to portray not only their feelings, but to also pay their respect to their beloved friend. However, the friends require inspiration, so decide to use some of Jodie’s old diary entries as a starting point. Battling the boundaries of artistic intention and appropriate responses to grief, will the friends actually be able to keep their cool? I recommend people go and find out for themselves. I got the impression that Lenson was bridging the gap between the friends and Jodie, using music as a bridge to make them feel closer to her. 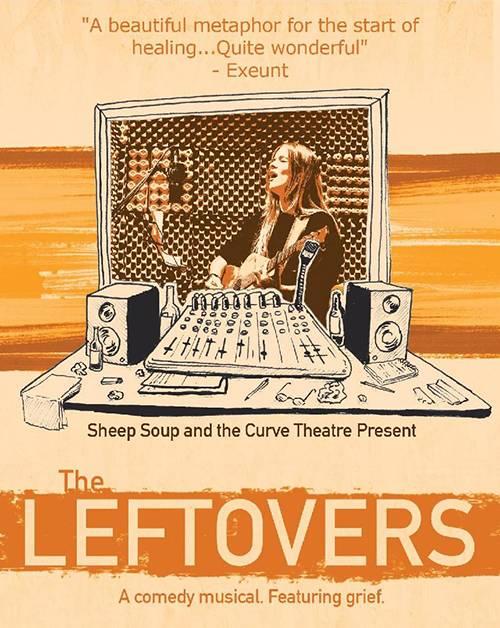 The directing and acting was second to none. I take my hat off to the actors, who inspired and dealt with any mistake so professionally that it felt like it was meant to be. I suppose with it been a naturalistic, spontaneous production, we will never know if it actually was meant to happen never the less let’s talk about the people who gave something magical. Phillipa Hogg, what a diamond! Her portrayal of the quirky Yaz (Jodie’s best friend) was believable and loveable, Hogg handled every raw piece of the emotional journey that her character was taking on. Her flawless vocals added to the character. Tim Murphy on the other hand played something totally different. Playing the role of Russ (Jodie’s long lost lover) Murphy gave us a bit of a geeky feel to the show, without the over exaggeration; the role definitely seemed like a walk in the park for him. Wreh-asha Walton who played the role of Angie was played with such intention, showing what it is to be someone who struggles to handle loss. Playing the role Angie (Jodie’s long lost best friend) Walton’s portrayal and vocal performance was effortless.

Sarah White on the other hand was something else. Playing the role of Hayley (young singer and songwriter) White’s chilled out naturalistic characterisation was second to none, her impressive vocal skills brought me to the edge of my seat on the opening scene. Last but not least, a special mention goes to the hilarious and talented Mr Ben Welch, who physically had me holding my laughter back. Welch played the role of Jim (friend of Jodie and studio manager) Welch certainly is something else, his sassy moments on stage had me in stitches, not forgetting to mention that his impressive vocal ability, it was fresh, clear and very well played. I would love to see Welch take on the role of Dui Finn, in the School Of Rock. Altogether the cast were totally electric, bringing life to such a small space. The chemistry between all actors and actresses was great, there was never a dull moment and never a time where I sat back and switched off. All 5 actors demonstrated that they were quadruple threats, playing their own instruments, and sometimes even sorting out their own technical, it was impressive and exciting.

The technical crew did a cracking job, everyone chipped in and this is exactly what theatre should be all about, coming together and putting on a brilliant show. I believe this is a show that could inspire more young people to get involved with the arts. In a time where the education is cutting funds at every corner, this would definitely inspire and encourage more young people to enter the arts.

In conclusion to my wonderful evening I would like to congratulate all the cast and creatives on such an amazing job. You have certainly outdone yourselves and I shall be keeping an eye out for future shows. Overall, it was a fantastic show and I hope to see other productions. Thank you for a wonderful evening and I wish you well for your next productions. https://www.thelowry.com/events/the-leftovers