Robert Icke's version on this profound historical tragedy by Friedrich Schiller Mary Stuart was magnificent tonight at the Lowry Theatre.

Icke's did not neglect the factual accuracy of this piece of history however he managed to find a sense of freedom through his stylization and portray the complexities of which Juliet Stevenson and Lia Williams convey effortlessly.

The show began with the house lights up on the full auditorium and the stage began to fill with the entirety of the cast. The layout of this show hinges solely on the flip of a coin. Both Stevenson and Williams stand direct from each other awaiting the outcome. Juliet shouted heads, the coin was flipped and tonight’s performance consisted of Juliet playing the role of the Virgin Queen, Elizabeth I. 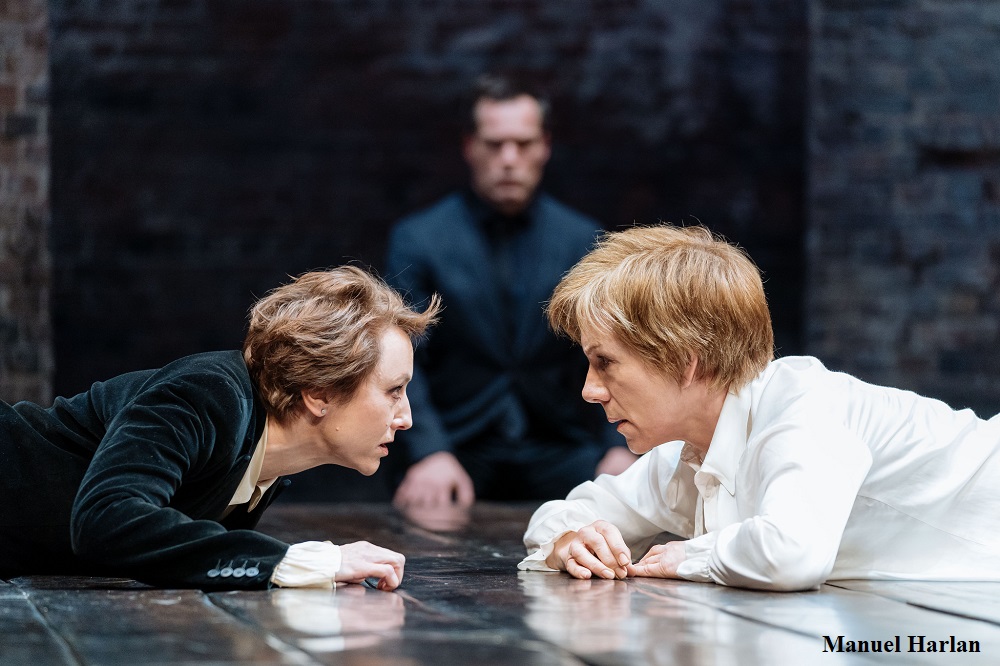 Mary is a blood relative to Elizabeth and has been held prisoner for nineteen years. Elizabeth’s decision is dependent on whether she will be held accountable for carrying out her death sentence and the journey of the eventuality of their meeting is played ominously by each party. The moment in which the organised meeting occurs outside the prison grounds; was simply incredible! The tightness of their performance and the direction was played to perfection.

Icke manages to emphasise so many differences between the two integral parts yet explore the many parallels between them. There were screens at the ends of the stage and although tonight they had a technical issue, they still managed to give us a modernised outlook on the play with bizarre flickers of lighting, timings and the running of the performance. The music of the show was sporadic and cleverly crafted to build this tense atmosphere between these two monarchs.

Both Juliet and Lia's presence on stage was profoundly fierce and incomparable. Their roles were acted meticulously to each individual role although they do share the title role. Lia played Mary Stuart with a sense of vulnerability yet pure control and Juliet's Queen Elizabeth was slyly provocative and filled with authoritative.

Icke's effort to structure this production by his vision to reveal these powerful women’s similarities yet polarities through their beliefs and triumphs in the relationship between moral and political realm was exceptional.

This is a gripping production filled with sheer resonance from these two talented women that create a magnificently dramatized historical story telling. The women have support from a predominantly male ensemble, with the likes of Leicester played by John Light and Elliot Levey as Burleigh who were all brilliant at creating the maximum tension the play needed.

Robert Icke's remarkable version of this play is filled with contemporary nuances and parallels. The play is bursting with pure talent and I am beyond intrigued to watch the role reversal of the flip of that coin and witness these astonishing actresses play both parts!