Anyone familiar with the YouTube ‘off camera’ rants of spoof reporter Jonathan Pie (Tom Walker) will also be familiar with both the targets of his rants and the vitriol and rage with which he expresses his despair and disgust at the state of the modern world.

The unknown element is how these 3-5 minute clips could be extended into a full length show. The solution is the Jonathan Pie Political Roadshow – a dry run for a new show that he hopes will be picked up by one of the major networks (particularly the BBC) and that will allow him to become the new Robert Peston/Andrew Marr leading to an eventual, much desired retirement slot on The Antiques Roadshow. What could possibly go wrong?

After an extended tirade against the contemporary obsession with smart phones and with people posting anything and everything on social media, Pie introduces the various elements he has devised for the show and which allow him to explore some of his favourite themes, though his increasing dismay at the appalling graphics and music are a joy to watch. 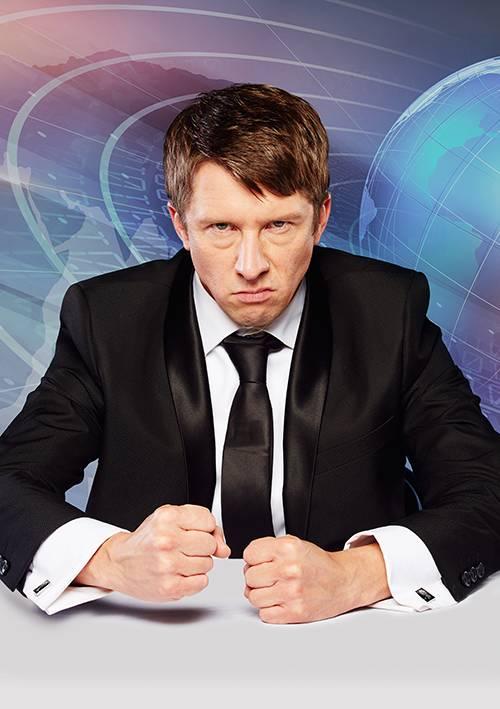 ‘In the Spotlight’, which will focus on a different political party every week, selects the Conservative Party (no surprises there), allowing Pie to give his explanation of why the British voters continually return the Tories to power (think of flies repeatedly banging against the window), and the ‘Woke-a-lator’, which selects ‘buzz’ words/phrases for him to discuss (his explanation of mansplaining will have won over practically every woman in the audience!). Nor does he limit himself to the easy targets; Guardian readers, the Liberal Lefties, also come in for significant criticism for their espousal of the modern day trend to be offended by anything and everything and for shutting down and blocking out those they disagree with: 'liberal people doing illiberal things in the name of liberalism'.

The larger space and extended time allow for a much more physical comedy than is possible in the YouTube videos and offer us an insight into Pie’s inner life, which also helps create balance with the political elements of the show - his child-like excitement at having his own set and his ‘own font’, his sadness as he catches a glimpse of a social media post showing a photo of his ex-wife and son, and eventually, as his hopes and dreams crash around him due to a combination of the obsession with social media and with being offended that he fulminates against in the show, he gives a succinct and simple explanation of the source of his rage and of why he is so watchable: ‘I genuinely care… I am a human being… I have empathy and imagination.’

And this latter element is why the show –and indeed, the entire Jonathan Pie concept - works. Walker and co-writer Andrew Doyle (whose warm up slot is also a joy to watch!) never lose sight of the fact that Pie is driven by a passionate belief in the need for people to participate in society rather than being obsessed with their phones, to reflect on the world around them, to listen to the arguments of those they disagree with in order to be able to engage in informed debate. It’s well-thought out, cleverly structured, and beautifully delivered – with creative insults constructed into towering linguistic edifices of incandescent fury. It’s also very, very funny.