On arriving to see an adaptation of Sophocles' Antigone, one usually expects to be transported two millennia back into the ancient world. Surprisingly, this production does the opposite, presenting a futurist vision of the ancient Greek tragedy.

This is Antigone as never seen before, presented in a form that resonates with a modern audience; it's a world of Twitter and surveillance drones, and one where every piece of information is only a few taps of the keyboard away. Sadly, it's also a world where stories of power-mad rulers are all too familiar.

Despite the modernist trappings, the essence of the play remains unchanged. Antigone (Holly Georgia) is the niece of Creon (Nicholas Cass-Beggs), ruler of the city-state of Thebes. After a civil war in which Antigone's brother Polyneices (Will Bridges) is branded a traitor to the city, Creon passes an edict that his body must be left on the battle field rather than afforded proper burial. Antigone must therefore choose whether to obey her king and uncle or to act out of love and loyalty to her brother. Her conscience demands she choose the latter, putting her on a collision course with the state. 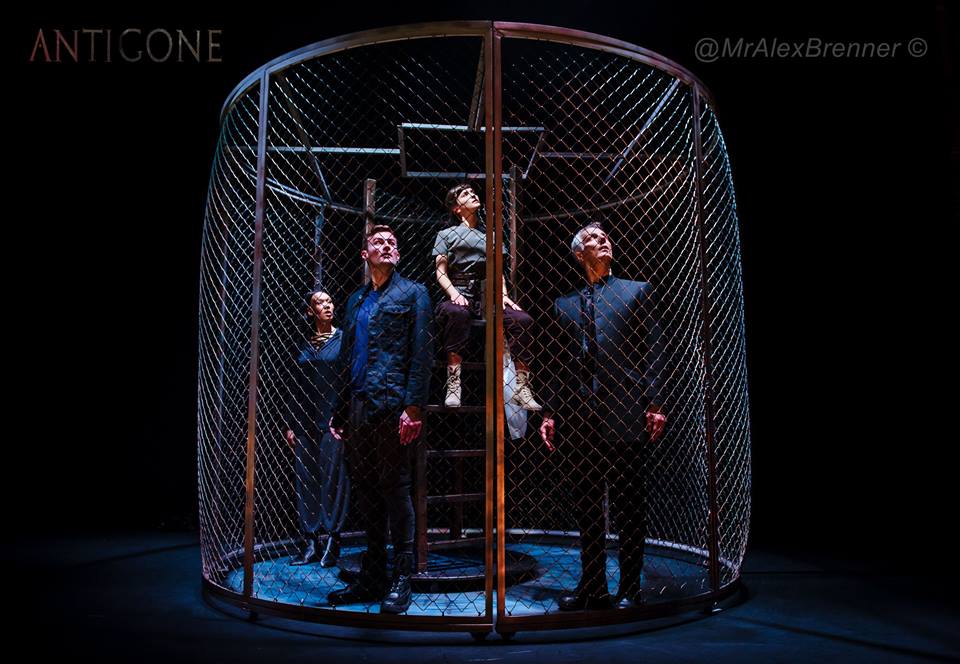 There's no doubt that for a modern audience Antigone can be a hard slog to read and understand. It's to the company's great credit that from this material they have created something so interesting, accessible, and above all enjoyable. Much praise has to go to the playwright Christopher Adams, in whose hands the characters and their relationships feel as tempestuous but relatable as any family argument. His Creon could easily have become a crude parody of Donald Trump. Thankfully, we are presented with a three-dimensional character, who is motivated as much out of a sense of despair as political duty.

Moreover, the set designs were cunningly simplistic, constructing a world that would not feel out of place in a dystopian science-fiction film. The mesh wire divides were judiciously used to convey the sense of a militaristic prison, a world in which all the characters are imprisoned in cages of one sort or another. Similarly, the use of light, shadow, and music were all to good effect, chiming with the computerised context of the play. The play's most ingenious move was the reinvention of the traditional Greek chorus as a cross between an internet search engine and the robot display from Snog, Marry, Avoid. The play may tackle heavy themes but always does so with a wink of playfulness.

Finally, the cast is superb. Holly Georgia portrays the heroine, Antigone, with enough pluck and determination to make us believe she could stand up to a security state, and Nicholas Cass-Begg commands the space when he is present, providing Creon with a humanity that is sometimes lacking from the original text. Nathalie Barclay (Ismene, Drone Operative, Archivist) and Will Bridges (Haemon, Polyneices, Archivist) effectively multi-role between their characters, keeping pace with a demanding narrative. While Crystal Brown induces us to laugh and lament as she switches effortlessly from a patois-speaking fortune teller to the more dignified and reserved Eurydice, showing great vocal and physical transformation.

This production of Antigone is both funny and thought provoking; an amazing and entertaining achievement for one of the most tragic tales in history. #freeant