The Railway Children - The Lowry, Salford

Having never read the book or seen the film I entered The Lowry Theatre with no expectations or pre-conceived ideas on how this production would play out.

There was an air of excitement in the theatre as many children waited to take their seats in the auditorium; the children were mainly of Primary School age stood patiently armed with their booster seats and sweets. The show was delayed by 25 minutes with no reason given to the audience where the children rightfully so became restless.

E. Nesbit’s classic novel The Railway Children is claimed to be the best-loved tale, made famous by the iconic 1970 movie starring Jenny Agutter and Bernard Cribbins, delivers a compelling coming of age story and a fascinating insight into Edwardian rural life. 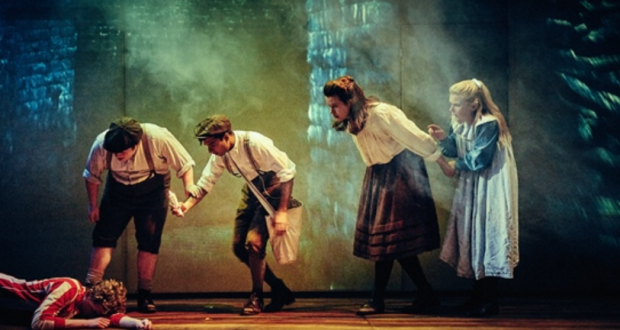 Produced by Nick May and directed by Paul Jepson the story is adapted by Dave Simpson to tell the story of how when their father mysteriously disappears with two strangers one evening, the lives of Roberta (Bobbie) played by Millie Turner a graduate from Scotland, Peter Played by Vinay Lad a graduate from London and Phyllis played by Katherine Carlton are turned upside down.

Forced to leave the comforts of their privileged London life in exchange for a simple existence in the depths of the Yorkshire countryside, the children – Bobbie, Peter and Phyllis befriend an old gentleman who regularly takes the 9:15 train near their home (‘The Three Chimneys”) and take care of a Russian exile imprisoned for 3 years for his political views and writings regarding poor people, Mr Szczepansky played by Will Richards, is searching for his family after escaping his life in the mines. The family soon discover unexpected secrets about their Fathers’ own imprisonment after being set up as a spy that was believed to have sold secrets to the Russians which changed their lives forever.

The staging is basic with the main use of a projector for the train, station and country scenes credit to video programming and production by Hayley Egan with a few props brought on from time to time.

The beautiful period costumes, set and video design were a credit to Timothy Bird, Lydia McDonald and Elle-Rose Hughes.

The show felt thrown together and disjoined for me making the evening a little disappointing, the characters were played beautifully by the acting team however it was a little confusing having two of the railway children white and one child from a different culture all having the same father. The same was said for Mr and Mrs Perks as he was white and she was of African origin and they had a white son John played by the talented Callum Goulden -  It didn’t draw for their talent just a little confusing in the visual belief of parentage.  Character’s doubled up which equally seemed disorientating at times of who was who during the performance.

The use of a banner during the scene where the children ask for help from the old gentleman on the train because their mum was unwell with Influenza said “She is nearly well – Thank You” clearly was a mistake as it was used again when she was recovering after the old Gent had supplied them with a hamper of medicines and substances to help the Mothers’ ailment.

The children of Salford however behaved exquisitely the upmost credit to their parents and seemed to be held throughout the evening by the performance of The Railway Children - An evening of mixed feelings for me regarding this production but one which seemed to entertain and please the audience of all ages in The Lowry Theatre.