It's a famous, even iconic film by one of cinema's greatest directors, Federico Fellini, and so I really feel as though I ought to be able to say that I have seen it. I haven't. However, what I did see this evening was undoubtedly the next best thing.

Kenny Wax Ltd, in association with Cambridge Arts Theatre and Bristol Old Vic, this was Belgrade Theatre Coventry's own take on the famous film. Director Sally Cookson and a multi-talented cast have reworked and devised it into a visually stunning and aurally stimulating piece of theatrical magic.

With a clever but simple stage set, evoking the era and genre superbly (Katie Sykes), simple but effective LX design (Aiden Malone), and original music by Benji Bower our 13-strong cast played musical instruments, sang, dance, acted, performed magic and circus skills, all completely seamlessly and with apparent ease. It was a masterclass in ensemble acting, and having only seen Cookson's directing on one occasion previously, I do believe she is a definitely one to watch!

The story of La Strada concerns Zampano, a strong man circus performer with a history. A mysterious and dangerous character who tours Italy performing his famous chain-breaking stunt. He pays 10000 Lira to a poor woman for one of her daughters, so that she can come and help to promote him and be his stooge. She is young, awkward, perhaps a little autistic, with a rare gift of being able to accurately forecast the weather. 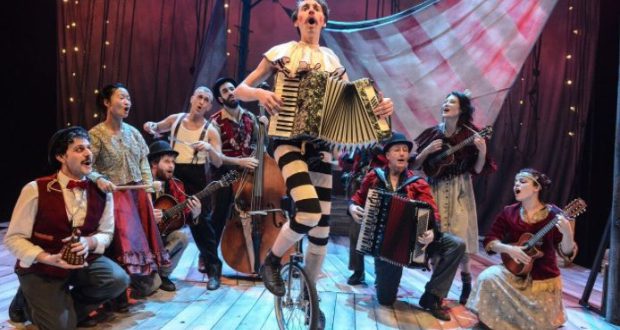 She is different from other girls, and Zampano has difficulty with her. He had already bought her older sister Rosa, but she died and so he needed someone else. And we follow Zampano and Gelsomnia as they travel from town to town, we see their understanding, respect, and perhaps even love for each other grow. That is until they join a circus proper and they meet the clown Il Matto. From then on things spiral out of control and, like some epic Greek tragedy, the fates have it in for them. It doesn't end well.

I loved the ensemble chorus work and the songs. Using Italian in some of the songs and continuing this into some of the lesser dialogues was inspired and beautifully done. The clapping, the simplicity but effectiveness of the motorbike, the movements of the ocean, all simple and perfect. My absolute favourite though was the rain! Utter brilliance.

Gelsomnia, a small, awkward, tomboy, - with a beautifully sonorous and high soprano voice - was played with utter sincerity and passion by Audrey Brisson.  A totally whole and completely believable performance. Stuart Goodwin's nasty strongman with a past was both physically and vocally impressive. The character was in danger a couple of times of becoming perhaps a little too much like a caricature, but his breakdown at the end was real and we empathised with him. I was not so sure either about the broad Northern English dialect here. All the other characters had variations on Italian / French / mid European accents, and although I understand that Zampano is the outcast and we are unaware of his birthplace; northern England seemed somehow too distant and too 'obvious'.

Bart Soroczynski played Il Matto (the Fool) with a certain charm; smiling all the while since he had already accepted his fate long before our story begins. A very easy to watch performer whose unicycle skills knew no bounds.

With a superb ensemble of smaller roles, singers, musicians, etc, this was a mini-spectacle. In fact, why don't I use the Italian word for a performance here. It was indeed lo spettacolo! Bravissimi tutti!