Be My Baby - The Lowry, Salford

Set in the 1960s, ‘Be My Baby’ tells the story of a group of girls in a mother and baby convent. Back then a woman’s reputation would be ruined if she were to have a baby outside wedlock. So the girls were whisked away to the convent to hide their pregnancy from the outside world. The story focuses on four different girls and how they come to terms with their pregnancy and realising that they will soon have to give the baby away.

The main thing that struck me as I left the theatre was how disappointed I was with the performances from Brooke Vincent (Queenie) and Ruth Madoc (Matron) who were sold as the ‘stars’ of the show. Instead it was Eva McKenna (Dolores) who stole the show for me; her comic timing was spot on, and there was a lot of hidden depth to her character. She plays the naive young girl with such conviction. Even when she delivers a horrifying experience from her past, she still maintains these characteristics. 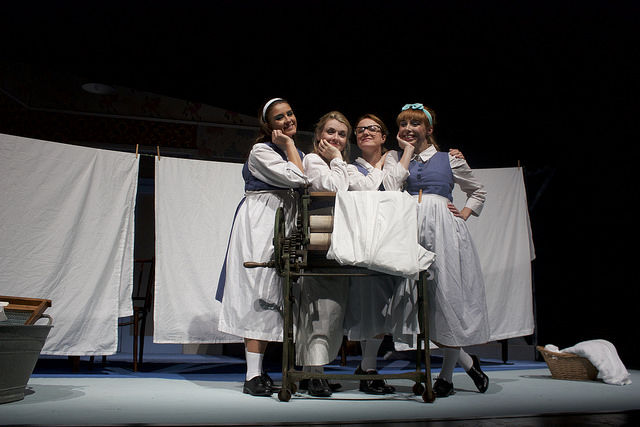 Vincent lacked variety in her performance. She never once emerges from an over exaggerated sulk. However, she did have some of the most comic lines, but they didn’t match with her ‘moody’ exterior.

Madoc did possess the authoritative force of the Matron, but I struggled to connect with her when she was revealing information about her past. The play is so short (approx. 90 minutes), I feel like she didn’t do enough to deliver a truthful performance. The final scene from Matron was in no way earned for me, I didn’t feel any sympathy for her.

The set was quite nice, it was divided into two - the Matron’s office and the girl’s bedroom. The half of the stage that was being used was lit for the appropriate scene. This did create some issues as at time the actors walked outside of the lighting area and were unable to be seen. I also disliked how a lot of scenes were played upstage, this created a greater distance than was needed between the audience and the performance.

Chloe Ramsay did a great job with the costumes for the show. The pinafores looked like they were from the 60s and could have been mistaken for school dresses if it weren’t the baby bumps underneath them.

There is a lot of potential with this performance, but sadly I don’t think it has been met yet. Perhaps due to Vincent and Madoc’s busy schedules they didn’t have the time to develop their characters as well as the other actors. This is probably one of the few performances I’ve seen where the ‘headline’ performers are out-shone by their lesser-known counterparts.