The Future - The Lowry, Salford

As part of Rambert’s 90th anniversary celebrations (they are Britain’s oldest dance company, founded in 1926 by Marie Rambert), the company returned to The Lowry for another The Future event, the first having premiered last year. The Future was an eclectic mix of new dance work from up-and-coming choreographers, working with either their own or Rambert’s dancers.

The evening began before the audience even entered the studio, with Because of Gravity (choreographer Bridget Fiske) performed in the foyer of The Lowry building; this performance was repeated during the interval in Studio 3 for the latecomers. I felt that Studio 3 was perhaps a more fitting space for this dance, with the long windows overlooking the night sky and the inky quay, with interesting movement echoing stars and planets. The spoken word perhaps confused the production’s message but was very poetic as a stand-alone. 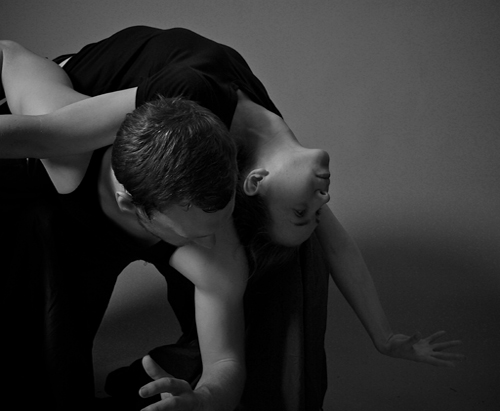 The first performance in the studio space was Labo(rat)ori, by Miguel Altunaga. This was an incredibly choreographed piece, with the two male dancers in lab coats, goggles and latex gloves perfectly evoking moments of tenderness, struggle, and violence in the repeated movements which seemed to echo Pina Bausch-esque choreography. The plastic artwork onstage was unnecessary as so much attention was paid to the very talented dancers, particularly as this then involved a lengthy clean-up afterwards, and the music was very generic and tonally did not display much differentiation throughout the piece. Moments of silence, where nothing but the dancers’ panting could be heard, were very effective, but may have been more so if the music had been louder or more intense in the moments before to emphasise the change.

Then came Vessel (Nadia Ifkhar), a solo female dance piece which again had music which did not evoke a journey or story. The visual impact of the dancer’s shadow on the stage curtains was striking, and some of the contorted tableaux and evocative facial expressions truly remarkable, but the pace of the dance could lag with some pauses not properly earned. Where Things End and Meet (Carolyn Bolton) had the clearest story of all the pieces, and the elasticated red ribbon attaching the two dancers was genuinely inspired and ingeniously used, but the blandly delivered spoken word played over the top said nothing the dancers were not already saying through their movement and had the effect of too heavily hammering the point home.

After an interval we returned for To Suit, a more upbeat and lively performance than any other in the evening, and also the best use of music I encountered. Moments of physical comedy were brilliantly performed, and the break of manic laughter and other various guttural human noises was interesting, confidently delivered, and an analysis of the limits of what dance actually is. RIFT (Simone Damberg Wurtz) then changed the tone again, introducing two white-faced performers in shroud-like white and grey tunics performing minimal movements. If I had not read the programme I would have been completely unaware that this piece was based on an old Denmark advert instructing the importance of wearing seatbelts. The message was confused and the Danish voice played over did nothing to illuminate.

The last piece was Traces (Joss Arnott), the most precise and technically impressive performance of the evening, which was visually striking (particularly due to the male dancer’s completely inexplicable fishnet shirt) and imposing in terms of the dancers’ ability. The journey of the dance was not particularly compelling but the movements were completely extraordinary.

As a whole, the evening was a fresh and vibrant display of talent. Productions like this are so important to fostering and nurturing dancers and choreographers while giving them a platform for their art. I hope that both Rambert and The Lowry continue with this important work.