Babes In The Wood - Sale Waterside

Where did Noah keep all the fish? In a multi-storey carp ark! Yes, if you like silly puns, laugh at jokes about current and past popular TV shows, and appreciate rather cleverly placed song lyrics and film quotes (mostly for the grown-ups!), then this is certainly the pantomime for you! The script literally sizzles with such things, it's a wonder they actually managed to tell the story and deliver the plot lines! What is in short supply though in this panto, is a couple of the more traditional and familiar routines that belong to this genre. For example, there was no 'behind you' set and no other set routines associated with panto, except for some really rather weak attempts at the 'yes it is, no it isn't' set, the audience shouting Hiya Martha to the Dame (normally done with Silly Billy) , the song sheet, and a couple of rather poor attempts at involving the audience. So this pantomime became in effect, much more of a play with outrageous humour and larger than life characters, but in actual fact, did that really matter? The most important thing with a pantomime of any description is to make sure the young audience follow the story, laugh a lot, and feel as though they have been included in the experience. In this respect, I think you ticked all the boxes, even though I still feel certain you could have and should have included the audience much lore than you did.

The show started this afternoon with the opening song and dance routine which sadly fell a little flat; not due to the cast - not their fault at all, but I don't think their mics had been turned on, since they were inaudible above the band, and either due to choreographer or director, the whole opening sequence simply lacked pace and energy. The mics continued to be problematic throughout the first half of Act 1, but were finally sorted, only for poor Grabbit to suffer a mic malfunction during his double act routine in Act 2, but to the actor's eternal credit, he didn't flinch, and upped his voice accordingly.

As for the band, then I really am at a loss to understand why the sound they created was so sparse and open when there were two keyboards there, surely they could have provided a more orchestral and fuller sound to the show. What they did play sounded really rather tinny and kept fluctuating in volume. This I THINK was due to the keyboardist playing with the touch-sensitive switch on, meaning that you need to apply exactly the same amount of pressure to each note to make each note sound the same, which when playing a piano is pretty much impossible and so when she applied a lot of force to the keys it was loud, and when she didn't it was muted and very quiet.

Some of the dance routines were performed to pre-recorded music, and these worked really quite well.

So as I have already mentioned the show started at quite a slow pace, and sadly this pace seemed to continue for majority of the first act. It was quite a long first act two, running at 1 hour 16 minutes by my calculations! Also, every time the tab came in for a scene in front whilst they changed the set or cast behind, they made quite a bit of noise.

There were however some really lovely characterisations amongst the cast. Sadly the director didn't allow them to really blossom or develop, and so in no way does this reflect the actors themselves or their talent. I loved Joel Madden's Silly Simon, despite him not really being given the traditional rights of this character. In fact, there was absolutely no point at all in his being there, since he added nothing to the show or plot development. Like I said, not his fault at all - that's down to the script and director. Fairy Liquid (complete with green and white bubbles costume) played by Jenny Hollinshead was just wonderful but again totally underdeveloped and had no real role here. Absolutely loved her interpretation of the fairy though, and the Elfie Stick was pure genius!!   Robin Hood (Jill Mallen) and Maid Marion (Chloe Arrowsmith) were good but their roles completely underdeveloped. In fact, the only reason for Maid Marion to appear at all was so she could sing not one, but two love duets with Robin! I also liked Friar Tuck played by Joe Cramsie. A cameo and rather insignificant role, but he certainly made the best of it and I liked his rather nonchalant dithering between his role as God's ambassador and human being with mortal feelings and desires.

The well-matched bumbling evil-doers with a good heart, Snatch and Grabbit (Anna Sillitoe and Ian Moore respectively) worked very well together; and despite some of the things they were given to do by director Derek Stuart Cole looking very awkward and 'stagey', they were very entertaining and their gradual change from evil to good was very well measured. They also had the best line in the whole panto. I just wonder how many people in the audience understood it, with it being an old theatre tradition that baddies enter and exit stage left and the good characters stage right! 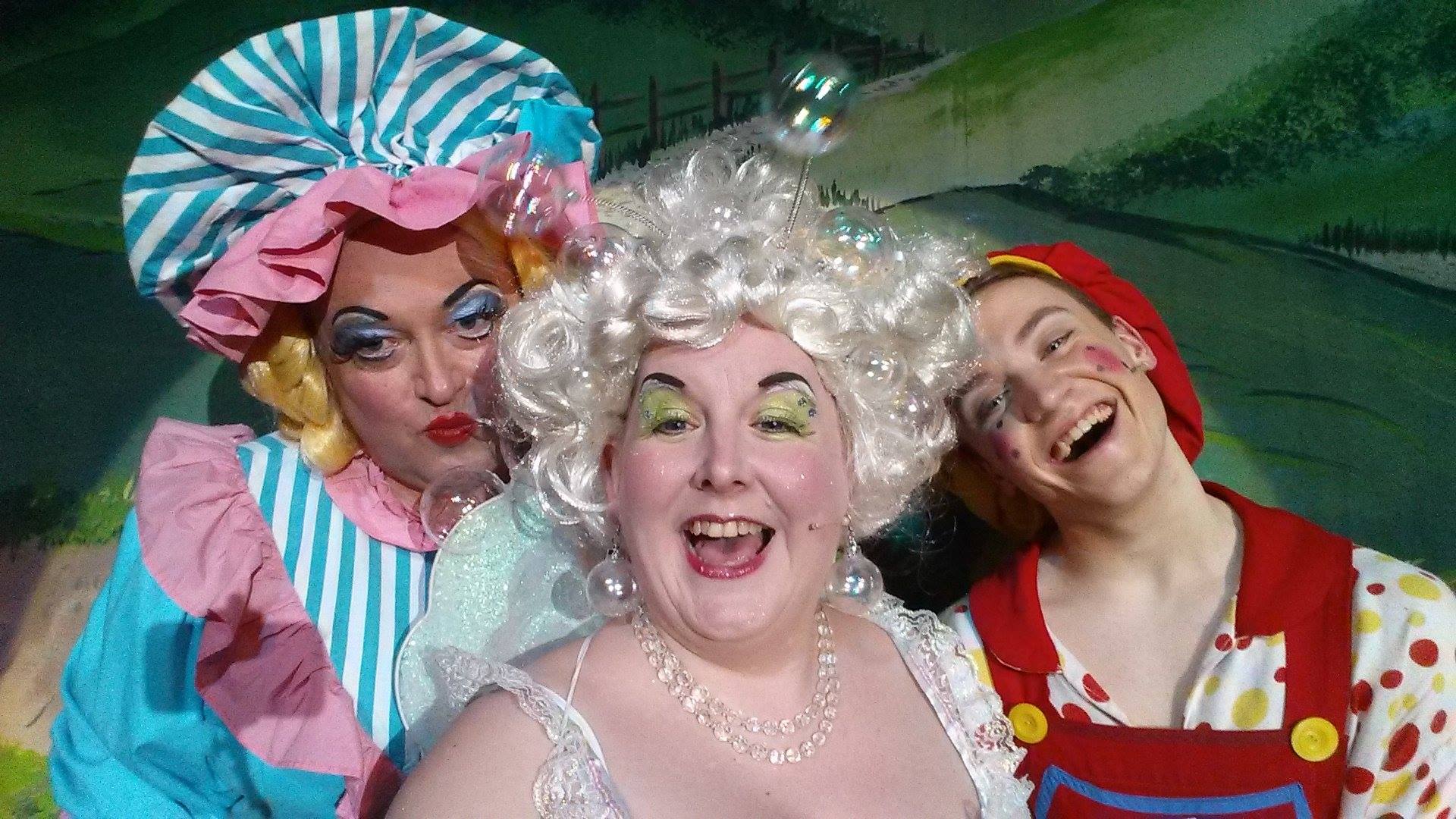 The show was stolen, or at least could have been, and maybe should have been, by Richard Ross as Alan-A-Dale. His absolutely brilliant Mickey-take of Rik Mayall's Flashheart in Blackadder was a joy, for those old enough to remember that is! And the youngsters just found his sexy hip swings and corny lines about needing women funny. Totally inoffensive with the majority going over the little ones' heads; perfect. Again though, I am finding it very difficult to understand the need for his character in this version of the story. Or maybe it was simply to fall in love with the most insignificant and pointless of characters in the script, The Dame's daughter, Linda Trott, (Sarah Reilly), whose only purpose was to be there to fall in love with Alan.

Basically the script [playwright uncredited] had too many characters with absolutely no purpose for them in terms of plot development.

A special mention needs to be given though to the two youngsters of the title, the 'babes in the wood'. They are played on a rotation basis by either Josh Moreton and Anna Wiggan or Niamh Mallen and Izzy Stuart-Cole. Sadly I don't know which pairing I saw this afternoon, but whichever they were then hearty congratulations to you both. Acting, singing and dancing you way through the show as you did, with clear and loud voices and great stage presence. Excellent work!

The show is completed by three sets of chorus / dancers, {each needing their own choreographer by all accounts!}, the best and most meaningful dance being the young dancers at the beginning of the second act when they appear as winged aphids and cover the babes in leaves, very balletic in construction and nicely executed. A good set and some lovely costumes. If only ALL the cast could have changed for the finale and not just some. The red / purple theme worked well for those that did change!

Finally, I need to ask a question. Is inviting ALL the children in the audience on to the stage for the song sheet a local tradition? I have only ever seen this happen once before, and that was in Altrincham. I think over the years I must have seen over 100 pantos and have acted in several too, but have never encountered this until just recently when two adjoining societies (geographically speaking) do it. Interesting!

Babes In The Wood is being presented by Sale NOMADS at The Waterside Arts Centre in Sale until the 17th January, and with lots of local references and totally family friendly it is a very good choice for those who have not yet quite had enough seasonal cheer!