Brought together by Penny Anson of the CLIC Sargent Singers, it was advertised as ‘over 250 performers in the choir and orchestra including professional soloists’, all who had come to perform Verdi’s choral masterpiece, his Requiem at Manchester Grammar School.

The evening was inspired by musical director Robert Carey, who generously gave his time and enthusiasm to the concert in addition to having the demands of being director of music at the school.

CLIC Sargent state that they provide ‘… vital emotional, practical and financial support to young cancer patients and families during and after treatment, and we take what they tell us about the impact of cancer on their lives to service providers and policy makers to help change things for the better.’

So that was the cause, what of the piece?

It is always an interesting conversation with musicians, performers, audience, professionals and amateurs when you raise the subject of Verdi’s Requiem and what they think of it.

There is usually a silence as the other person invariably needs to consider and reflect on the question before answering. Such is the nature of the piece. But even if a work of this size, depth, scope is not ‘your thing’, every time I have ever discussed it the conversations had a common theme: respect.

A notable sage of the concert platform put it in context for me many years ago and his words still ring in my ears: “Be afraid, be respectful, do your homework; then prepare to be inspired and addicted.”

The simplest description of a requiem might be a ‘mass for the dead’, but you would have to be dead for this powerful opera-like score not to, at times, make you hold your breath, your heart skips a beat, then start racing – and sometimes all in the space of several bars. After all, from barely audible in the opening bars to subsequently being marked ‘ffff’ is some going!

History appears to have had varying and even contradictory recollections of how the piece was considered since it first appeared over 140 years ago. But it is accepted as being one of the most widely performed in the choral repertoire, even competing with Mozart’s own distinguished offering. And Verdi’s Requiem demonstrated in this performance its enduring power to catch the breath, make the spine tingle and be placed in a state of awe at the magnitude of it.

And last night, from the first bars of the Requiem and Kyrie, it is safe to say that the whole audience knew they were in for something special. From the nearly 80 players in the orchestra, almost 200 in the choir, they, including the soloists, had given of their time and their talents free of charge – some achievement in itself and adding ‘humbling’ to the list of feelings by the end of the night. But with only four rehearsals under their belt, the choir were simply astonishing. It was a crisp, clean, controlled and cohesive sound and to the last note, they commanded your attention. And the proof of their discipline came very early with that orchestral entrance following their first unaccompanied section. Spot on.

Our introduction to the four soloists soon established that they were going to contribute their own unique abilities to something quite special.

From the off, the conductor Robert Carey was in control with a relaxed style which clearly engendered confidence in the choir and orchestra alike. He exuded energy and at times was a soloist in his own right!

The choir picked up the gauntlet cast down by the orchestra with the setting for the huge Dies irae and they were their equal as they punched out the Latin text clearly across that high and at times, acoustically unhelpful auditorium. The positioning of the soloists to the left of the orchestra occasionally proved the point. 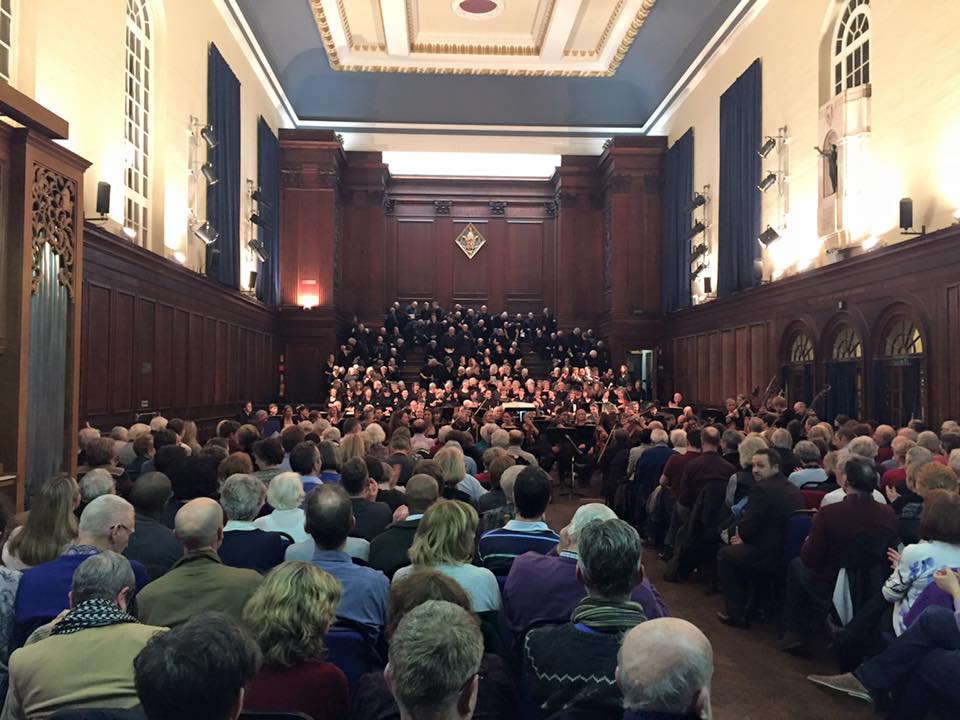 The success of a huge piece like this can depend on whether you are able to provide those essential, trademark elements and they were there from the resounding thunder of the Verdian Bass Drum to the superb ‘trumpets off’ in the balcony, whose entrance and sound were electric.

The entrance of the Bass, Mark Rowlinson, demonstrated that all-important required gravitas and his delivery was very pronounced, deliberate and unrushed, particularly in the Mors stupebit.

This was followed by Mezzo, Joyce Tindsley, who had a beautiful mellow tone which resonantly soared over the orchestra with no hint of a competition to be had with them, assisted by very precise enunciation in her Liber Scriptus.

The Tenor, Mezzo and Soprano gave us a very finely balanced sequence with the Quid sum miser with Soprano, Andrea Tweedale, providing a striking line which again, soared over the orchestra and was a great introduction of what was to come from her.

The conductor did not allow the Recordare to be too pedestrian as can sometimes be the case, and he controlled the orchestra exceptionally well with both soloists blending beautifully and I have to say, the Mezzo and Soprano were equally, simply divine.

The Ingemisco was performed with restraint and a controlled line by Tenor, Matthew Minter and although his interpretation was not that of a hugely powerful, heroic, Verdian tenor, he approached it very intelligently and with exacting precision which was keenly understood by the conductor who ensured it was supported intuitively and which gave it a lightness which was very engaging.

The Bass used his skill to good effect during the Confutatis demonstrating an evenness of sound and texture across his range.

I felt the Lacrymosa was one of the highlights of the evening in which all the several parts of the whole just came together, seamlessly, effortlessly. The intonation of the soloists added to it being a glorious piece.

The quality and consistency continued into the Offertorio and the Domine Jesu Christe, followed by that beautiful Soprano entrance supported by un unfaltering violin accompaniment which ebbed and flowed into Quam olim Abrahae and all of which, the conductor (again) held together exquisitely - and its resolution was sublime.

To depart slightly, the Sanctus was worth the wait, if for no other reason than having the opportunity to observe the conductor! But his energy ensured that both orchestra and choir were evenly matched and there was a synergy between them which ensued a dynamic and exciting sound.

The opening of the Angus Dei provided a super illustration of the musicianship of the Mezzo and Soprano. The Mezzo built upon this with a beautiful opening for the Lux aeterna. She demonstrated a relaxed, almost graceful style to her delivery and she was a joy to watch, proving that important point that your presentation on the platform adds so much to the vocal performance. And it then evolved into a well-matched and exacting account of the piece from the soloists and was another highlight of the evening, with the Mezzo shining and the Bass adding his presence and gravitas and finally, the Tenor threaded perfectly throughout.

And the Libera me was worth the wait. The Soprano and this magnificent choir sang with precision and passion. The choir then ensured they had enough left to give an energetic and determined reprise of the Dies irae which retained the power of earlier.

The Soprano’s soaring and seamless sound within the Requiem aeternam then gathered the other soloists and choir into a resolution which was worth the ticket price on its own.

But the final (and greatest) credit must sit with the choir, orchestra and conductor. In the Libera me they held their concentration, stamina and skill to the end and by the conclusion, proved they were up to the challenge this epic piece had laid down for them.

It is a testament to the dedication and passion of choral societies down the years that music of this size really can (in theory anyhow!) be performed anywhere and by anybody. But a performance of this scale, quality and calibre is what it was written for. And the evening did it justice and so much more besides. And in appreciating the true magnitude and capacity of this work, one cannot help but be drawn into its history for a brief moment and an interesting fact that many have forgotten.

Over 70 years ago, this sacred work with, as its musical setting the Catholic funeral mass, was performed several times by a group of innocent Jews who formed themselves into a choir in the Terezin concentration camp during the second world war. It may be reported that it had been a measure of defiance towards their Nazis persecutors, but one must speculate that, to the performers, it was much, much more. And here we have this performance, in the same week as Holocaust Memorial Day.

So, another performance to add to the distinguished pedigree of this Requiem and one which, I am sure, Verdi would be rightly proud of. For those involved in tonight’s performance and the charity CLIC Sargent, they should share that pride. And whether reviewing this annual charity concert again in the future or not, the passion, enthusiasm, quality and purpose of this particular one has ensured one thing: you have found yourself one more patron.

To find out more about CLIC Sargent and other events in support of the charity, visit: http://www.clicsargent.org.uk