Sparkling showman John proves that all songs mean something if you just listen to the words.

Renown for being a showman of many aspects of ‘the business’, it was a pleasure to welcome John Barrowman - of Captain Jack Harkness fame in Doctor Who and Torchwood - back to Manchester’s beautiful Bridgewater Hall for his first tour in four years!

Since last here, he has been busy with various ventures, often in the USA, including TV action series Arrow and touring with expos and Comic-Cons for the shows with which he has been involved. Although he admits being nervous about the expectations of this tour, his charisma and vanity prevail and his highly-promoted risqué outlandishness and innuendo-based witty humour, make for a great night’s entertainment; coupled with his distinctive vocals, dance moves and admiration of his fans putting him where he is today and his support for the LGBT community.

His tours, devised in partnership with his manager and production partner Gavin Barker (BarrowmanBarker Productions), aim to tell stories of his escapades for those who don’t follow in on social media, on which he is very active, and provide insight into the life of the eccentric star.

With the help of projections of photos we see that, although he has been honoured with an MBE, he is very much a family man, grounded by his roots in Glasgow (Developed an American accent after school children picked on his Scottish accent when he moved to the United States), who was just born to entertain.

The support of his fans is clearly shown, not only through the limited number of vacant seats at each venue he performs at, but also through the fact that his latest album, titled after the song made famous by Josh Groban ‘You Raise Me Up’, was funded by his fans through a crowd-funding website. For this he is understandably humbled.

With the help of his amazing band of seven experienced musicians, under the direction of John’s Musical Director Matt Brind, and the newly selected ‘J4’s’, we are led on a journey through the last years, learning that his husband (in a civil union since 2006 but legally married in the state of California on 2 July 2013, following the United States' Supreme Court decision to deny an appeal to overturning California Proposition 8) Scott Gill, who he met during a production at the Chichester Festival Theatre in 1993, got his pilot’s licence and various members of his family, including his 80+ year old parents - who are present at many of his concerts - celebrated milestones in anniversaries, birthdays and even offsprings.

Barrowman is an animal lover and supporter of many charities, usually involving animals or helping the LGBT community, both of which he is an admired ambassador. As aforementioned, he made the decision to get officially married on the day the ruling of equal marriage was overturned and witnessed the weddings of so many lgbt couples of all ages and backgrounds on that same day. In the show, this was linked to his rendition of Christina Perri’s ‘Thousand Years’ when he promoted the view that no matter where you are or what people say, if you love someone you will wait a lifetime for the opportunity to prove that love and make a difference.

The other songs in his performance followed similar introductions and included favourites like Olly Murs’ Wrapped Up (show-opener), Quando Quando Quando, Hero, Listen to the Music, Walks like Rihanna, Superhuman, Everlasting Love, and even Scottish heritage track Loch Lomond which he performed in true Barrowman style wearing glittering red kilt.

He made reference to being in his happy place ‘Xanadu’ when presenting his Sunday night radio show on Magic and said that he loves his life and the ability to do all the things that he does, - from serving ice cream to passengers whilst bored in the first class sections on board jumbo jets - This made him close the first part of his act with This Is The Moment. His dancers should be commended for their routines - choreographed by Gary Lloyd - particularly Uptown Funk during which they were introduced by name by John and their acting skills in Walks like Rihanna.

Overall a brilliant night’s entertainment with songs that you can either sing, cry or dance along to, topped off with encores of ‘You Raise Me Up’ and ‘I Am What I Am’.

John’s support act was Swiss songstress Miel de Botton who performed songs - mainly about unlucky love and failed relationships - varying in French and English, as featured on her new album ‘Magnetic’. She confessed that John requested she take care of the audience’s hearts and minds and he take care of the rest of their body parts!

If you get chance to see this man, grab it and let yourself loose. 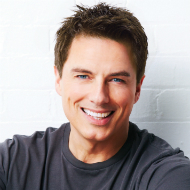