The American actor, singer and songwriter Ben Platt began his career as a child, performing in musicals such as The Music Man and Mame. He went on to appear in The Book of Mormon and originated the titular role in Dear Evan Hansen, earning a Tony award. His film credits include Ricki And The Flash, Pitch Perfect and Pitch Perfect 2. On TV he stars in the quirkily satirical Netflix series, The Politician. Netflix now bring to the screen a recording of the last night of his debut concert tour, filmed at Radio City Music Hall, New York in September 2019.

If your expectation is a collection of show tunes with perhaps the odd soft rock cover to illustrate Platt’s versatility, think again. There is nothing from a musical, not even Dear Evan Hansen. The concert is composed mainly of songs co-written by him taken from his first studio album, Sing To Me Instead. 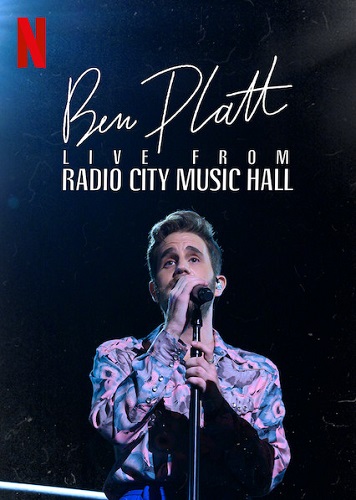 The songs and dialogue are autobiographical, the narrative providing the event with the essence of a Broadway musical. Theatre combined with Concert Hall. The subject matter ranges from Ben coming out to his family at the age of twelve to an admission of a dislike of cats. It’s a revealing, personal performance which relies on engagement with the audience. Platt’s ability to create a feeling of intimacy with them in a barn like Radio City Music Hall is a tribute to his precocious talent.

To watch the audience, many of them mouthing lyrics, is to be given the impression of fans of a seasoned performer savouring their idol’s greatest hits. That this is inspired by musical numbers mostly from an album released only last year says much of their quality. These are introspective songs which avoid self-indulgence though in some instances only narrowly. The affecting In Case You Don’t Live Forever is a timely reminder to express appreciation of loved ones. The witty Share Your Address is Platt’s account of his tendency to over commit in a relationship at a premature stage. New is the cathartic depiction of reinvigoration after a failed love affair. His soulful rendition of Brandi Carlile’s The Joke is one of only two covers, the other being incongruously Elton John’s Take Me To The Pilot.

If this all sounds very American and theatrical it is. If it sounds risible and cloying, Platt’s endearing sincerity and vocal dexterity ensures that it isn’t. His singing is distinctive, heartfelt and unlike the generic style of many Broadway artists. Earnest, intense and unique, he demands and receives the attention of the crowd along with their adoration.

This spellbinding live performance remains alive on the small screen.