Mothership bill themselves as ‘no costumes, no wigs, no nonsense: a tribute to the music of Led Zeppelin’ and that is exactly what you get. As a pretty well seasoned tribute act fan, I am never sure whether the full imitation acts with costumes and acting are any better or worse than acts that are all about paying tribute the music, but Mothership put forward an exceptional case for the more homage approach.

The stage was uncomplicated, set up as though it were a standard gig with no gimmicks or giveaway props so often seen with tribute acts. The band were professional and unassuming. The set included all the huge hits, but also some lesser known work that was a joy to hear.

There was a screen that showed relevant imagery of the 1970’s throughout, there were flowers, girls and lots of psychedelic graphics. In between songs with longer tune-ups Mothership played news clips of Robert Plant and the band, illustrating how they grew into their sound and became one of the greatest rock and roll bands in the world. We also saw how the loss of drummer John Bonham affected their ability to play music and was ultimately why they disbanded. 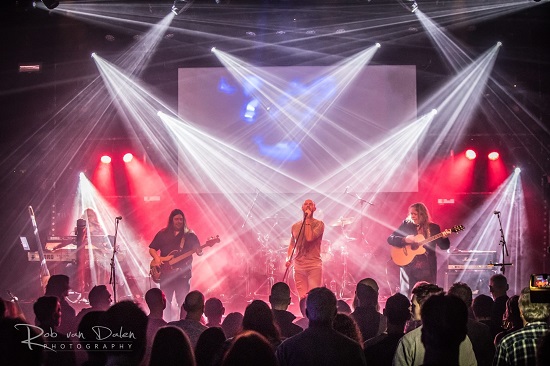 Matthew Vaggers established the standard for the evening by opening the set with spine-tingling vocals to the well-known Immigration Song and astoundingly managed to keep up that standard for a whole three-hour set. Not just any standard either, Robert Plant has no mediocre voice and Vaggers seemed to effortlessly articulate the musical gymnastics, soulful blues and real rock and roll whooping that is so essential for an authentic Zeppelin sound.

Lead guitarist David Crilly too was clearly a genuine fan of the band and gave a stunning depiction of Jimmy Page’s talent and the music of the London founders of heavy rock music. The joy the whole band showed at the chance to perform this set in The Quays Theatre in The Lowry, Salford was contagious, they were dancing and laughing and seemed to be very relaxed despite a technically immaculate set. Since I’ve Been Loving You was like listening to the actual studio recording, although a personal favourite it was inarguably very moving and impressive.

Particularly in the second half the audience seemed to go up a gear as we climbed the hits up to the likes of Kashmir, Black Dog and Trampled Under Foot via a six minute foray into Fool In The Rain from lesser acclaimed and last studio album In Through The Out Door, complete with whistles and bongos.

The encore was perfectly placed as the audience got what they came for with Whole Lotta Love and Rock and Roll. The whole room was on their feet for the finale, and I left the Mothership gig thinking they belong on bigger, more rock and roll stages in our very rock and roll city, I hope to see them on the circuit again and again.