The Hollies - The Lowry, Salford

With a combined age of around 397 (sorry guys its true!) this six piece 'boy' band have a wealth of experience of life on the road and are proud of the fact that they have toured every single year for over 50 years! Their stamina is incredible and they show no signs of flagging thankfully, for they have many fans as is evident this evening at the near capacity audience in the Lyric Theatre at the Lowry Salford. They were built to last in the 60's when the Hollies were first formed and I doubt there will be many bands such as these for future generations to appreciate for a great night out full of nostalgia.

There are still two of the Hollies band members from 1963 performing, Bobby Elliot on drums and lead guitarist and vocals, Tony Hicks. Hicks also wowed us with fantastic skills playing an electric sitar, (Guitar sitar as they called it). Other band members are, playing bass and on vocals, Ray Stiles,(ex Mud member) who joined the Hollies in 1986, Ian Parker, keyboard and vocals joined 1991 and joining the band in 2004, are Steve Lauri guitar and vocals and Peter Howarth, acoustic guitar and lead vocals. The sound these guys produce together is superb whether musically or with harmonies. They have stage presence in abundance and are instantly likeable. All too often people on the upper balconies are overlooked by bands who often perform to just a few rows at the front, but this band are true professionals and the fans were acknowledged all over the theatre with at one stage Parker coming down into the audience, dancing around and shaking hands to the delight of many. (He even got the odd kiss or two and I'm not sure who was the more delighted, him or the fans!) 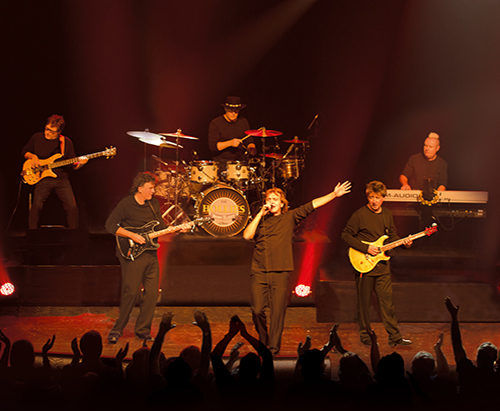 As the show started I was surprised at just how many songs I remembered and was soon singing along to them with the rest of the audience. That said you could hear a pin drop when 'He Ain't Heavy He's My Brother' was performed with many of the audience lost in their own thoughts with the memories the lyrics of this song can evoke. There was a prolonged standing ovation, rapturous applause and cheering awarded for this song ensuring we were treated to an encore with 'The Air That I Breathe' but the audience were not going to let them go at that and there followed 'Long Cool Woman (In A Black Dress) before the band finally left the stage. Over two hours of classic songs sounding as good today as they did back in the sixties is no mean feat but The Hollies accomplish this with ease.

Needless to say on the journey home songs such as 'Jennifer Eccles', 'Carrie Ann, and 'On a Carousel' were spinning around in my head.

The Hollies continue to tour and for further information see: http://www.hollies.co.uk/tour.html