What a treat I had at the Stockport Plaza for 'Disco fever live' and what a shame that this show was one night only because it was a must see show. Disco Fever brought variety, style, adult humour and a lot of fun with a variety of acts performing hit tracks from many decades. The show began with the song Heaven from Tavares and from the very start I knew I was in for a good night. Not only was the show outstanding but the atmosphere in the auditorium was fantastic, within minutes from the start there was audience members dancing in the aisles and I felt it was only right to join in.

The show features various acts including: The Real Thing and Odyssey who both gave an outstanding performance. Throughout the audience were made to feel involved. We're stood up, clapping along and in the first act I ended up on the stage! I really lost myself, let myself go and had a lot of fun (maybe too much). The artists were also backed up with dancers who were elegant, flawless and a great compliment to the show, I loved that the dancers looked like they were enjoying it with great chemistry on stage.

Although the show is aimed at an older age group I would say that it's fun for everyone and you actually forget you're in a theatre, the audience were so relaxed and enjoying themselves. It was the perfect opportunity to make new friends, me and my Auntie who accompanied me met lovely people on our row who we had a drink with after the show.  Between songs we had moments of comedy from the acts with good old banter with the audience, this broke the show up very effectively and there wasn't a dull moment, my only criticism is that sometimes the speaking went on too much and the comedy timing was sometimes off which created some awkward moments but the atmosphere was still electric.

It's such shame that the chance has gone to see this fantastic show but I would definitely recommend attending music events because they are a completely different experience especially if your like me and a first timer. I speak on behalf of the whole audience when I say it was fantastic! 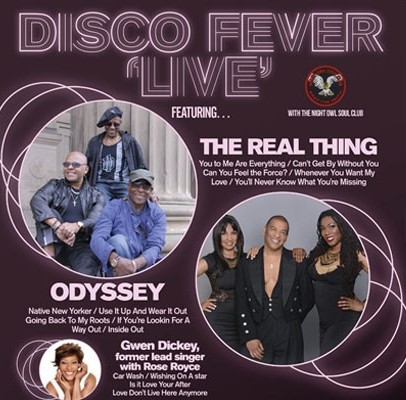