I'm a little ashamed to say that I hadn't heard of King Pleasure and the Biscuit Boys before I went to tonight's show but I certainly know them now and I'm very glad about that.

King Pleasure and the Biscuit Boys describe themselves as a Swing and R&B band and they've been around for quite a while (thirty years).   They say that their music comes with a "cheer up guarantee".   This is very true indeed!   My feet were tapping throughout the whole show and I just had a big smile on my face.   Even though I didn't know many of the songs, this did not matter. The music is uplifting and joyful, the performance is exhilarating and the sheer enjoyment of the musicians is totally infectious.

There are six members of King Pleasure: King Pleasure himself (sax and vocals), Bullmoose K Shirley (guitar), Shark Van Shtoop (double bass), Gary "the Enforcer" Barber (drums), Mighty Matt Foundling (keyboards) and Big John Boysey Battrum (tenor sax).   They come on stage all dressed in blue suits (extra points from me for the uniformity - although Mighty Matt Foundling's suit was a slightly different shade of blue which drew my pedantic eye but I digress...) and begin playing straight away - no gentle easing in for the audience, we are straight into toe tapping, foot stamping music, what a great way to begin.   King Pleasure is instantly likeable with a beaming smile and constant engagement with the audience.   Without waiting for applause we are into song number two with King Pleasure singing in a rich, earthy voice which has a fantastic range.

There is some physical comedy from Shark Van Shtoop and his double bass - these two should have their own show really, I'm not sure who was in charge of who but I don't think it was Shark!   His double bass was like an unwieldy dance partner and it was totally entertaining to watch them both. His facial expressions were hilarious.

As for King Pleasure - he is one big ball of fun, encouraging the audience to join in by clapping, clicking fingers and singing.   He too has a very expressive face and is compelling to watch.

The band and the music are warm and instantly likeable.   It is feel-good, hearty music that makes you just want to get up and dance. "Shake, Rattle & Roll" is instantly recognisable, as is "Tequila" (with audience participation) and "Sway". "Just One Drink" was funny and instantly likeable, I am still humming the chorus now.   It is an eclectic mix which really works.

With nine songs in the first half, twelve in the second and also an encore, you certainly get value for money - the music just keeps on coming and the energy of the band is unrelenting.

Sadly, the auditorium was not full but that didn't matter to this band, they enthused, they performed to the max and they worked their socks off - to a very appreciative, if diminutive audience.   It took until almost the end of the second half for some brave souls to get up and dance - in a smaller venue, this would have probably happened a lot sooner. I would certainly have been on my feet throwing some shapes if I could have done it anonymously! 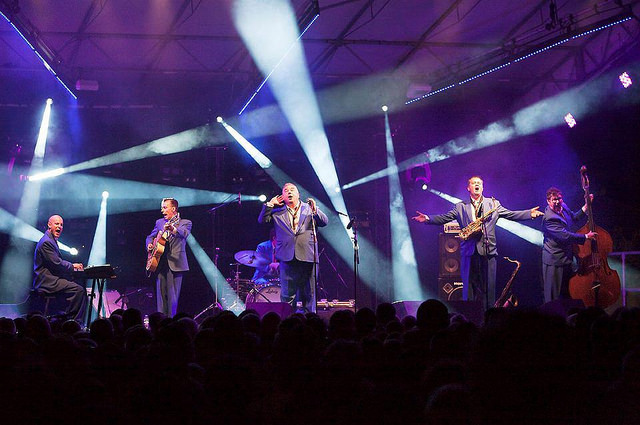