Emily Bronte’s 1847 novel is a difficult beast to tame; the differing narrative voices, lengthy chronology and supernatural romanticism has been captured on stage, screen and radio dozens of times, with varying degrees of success.

Director Bryony Shanahan has used her inaugural outing as new Creative Director of the Royal Exchange, to attempt to make new sense of this unwieldly gothic classic.

The stark, modernist ‘metal O’ of the Exchange is transformed into Yorkshire moorland in the opening act by Designer Cecile Tremolieres. Mixed in with the grassy scrubland and blasted trees are the furniture of the eponymous ‘Wuthering Heights’ and ‘Thrushcross Grange’, accentuating how integral the moors are to the lives of the characters, as well as dispensing with the need for endless tedious scene changes. This wild and verdant idyll is the playground of young Cathy Earnshaw (Rakhee Sharma) and her brother Hindley (Gurjeet Singh), and when they are joined by feral foundling Heathcliff (Alex Austin), the childish rivalries and jealousy set in train events that affect the family down the generations.

In common with many adaptations, Sheridan has chosen to dispense with the latter part of the novel, concentrating instead on the love triangle of Cathy/Heathcliff and Edgar Linton (Dean Fagan). Of the latter part, only a small hint at the end remains, foreshadowing the repetition of the destructive love cycle that is a central motif of the original story.

However, sole reliance on this central storyline necessitates conveying the wild passions that Heathcliff and Cathy are subject to and how they subverted Victorian society. Unfortunately that was not conveyed in this production with Sharma giving little sense of the untamed sexuality of a Cathy unable to resist Heathcliff.

Austin was weirdly watchable as Heathcliff but gave a strange interpretation of the character. In the first half he was downtrodden and whining, more Uriah Heep than romantic hero; he emerged after the interval as a cruel character with hints of androgyny as well as misogyny to the fore. These essential shifts in the character portrayals made it difficult to convey any passion or romance between the leads, or sympathy from the audience and the overall effect was to render the piece soulless.

Strongest support was offered by Nelly (Samantha Power) as the plain talking servant and the father, Earnshaw (David Crellin).

All too often the cast seemed to be attempting to find humour in the story at the expense of pathos. Edgar was portrayed as weakly foppish rather than as a model of rectitude and Hindley descended into a drunken caricature. The audience took this as their cue and at times it felt like straying close to spoof territory pace Victoria Wood. The juxtaposition of the modern language and Brontes original, starkly beautiful poetry was also jarring; what was gained in clarity was equally lost in translation.

Sound Designer Alexandra Fay Braithwaite utilised two musicians (Sophie Galpin and Becky Wilkie) onstage throughout, adding greatly to the atmospheric setting, through liberal use of guitars and drums. Both were note perfect throughout, unlike this rare off key offering from a fine production house. 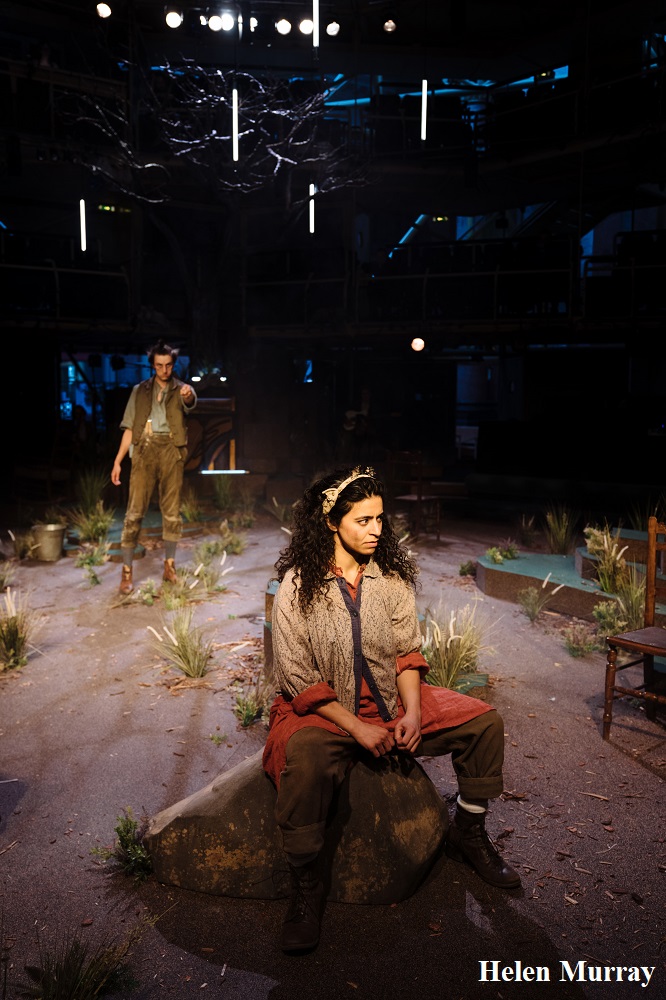