A wet, pitch black Sunday night in November tempts one to stay in by the fire with something warming and alcoholic in a glass. However, the theatrical call of duty took me to the (as yet) ungentrified bit of Ancoats, in search of this production of a rarely performed piece of Shakespeare. I’m glad I made the effort.

Founded in 2016 by Artistic Director Abey Bradbury, Cream Faced Loons are ‘a theatre company with a fundamental desire to present Shakespeare in a different light’. As this mission statement promises, what unfolds over the course of the 100 minute run time is a kaleidoscope of music, physicality and humour performed with energy and commitment by the youthful cast.

If you remember anything of King John from your history lessons, I imagine it will relate to either Magna Carta, the Barons’ War or his role as one of the bad guys in Robin Hood. Apart from passing reference to over taxation, Shakespeare mentions nothing concerning these matters, choosing to focus his attention of the Plantagenet claim to French lands that followed the disputed succession of John to the throne, after the death of his brother Richard the Lionheart in 1199. 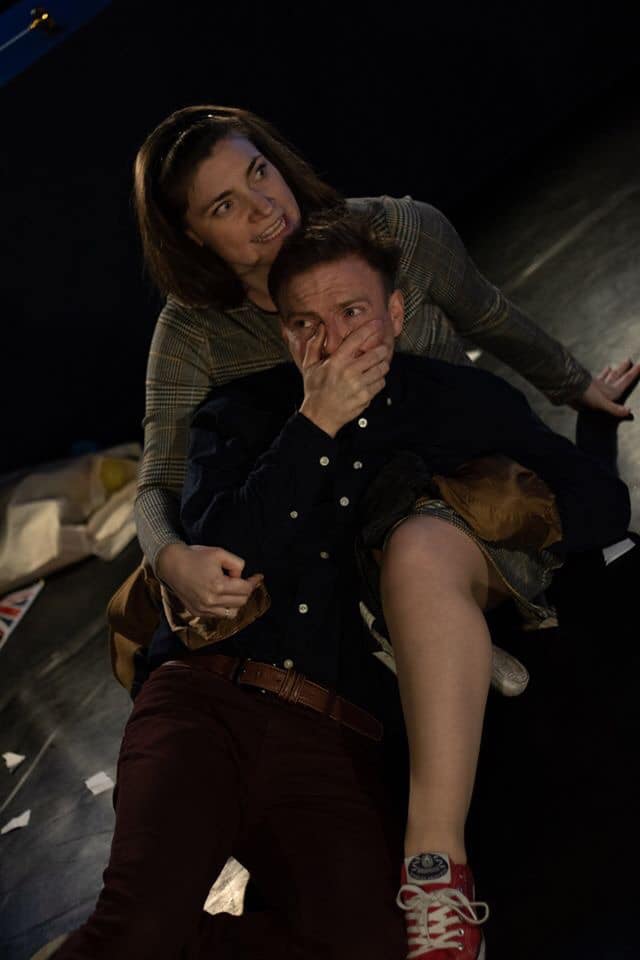 This dry sounding premise takes us into a familiar Shakespearean historical milieu of weak Kings, strong Queens and bastards plotting their ascent through the court. Any lack of familiarity with the play is quickly dispelled and we are reminded of the genius ability of Shakespeare to tell a grippingly good story despite playing fast and loose with historical accuracy.

Director Bradbury follows the lead of the Bard and made some changes of her own; conflating two original characters (Hubert and Philip Falconbridge) into The Bastard (Nicki Davy) and gender reversing the French King (Melissa Williams). Adding the weight of Constance (Ruth Murray) as the widowed mother of the usurped Arthur and Blanch (Lucy Litchfield) as Johns niece, and this becomes a piece showcasing female strength in the face of male arrogance, vanity and weakness. Davy is exceptional as the Bastard, showing both cunning and guile in soliloquy but demonstrates a tender mercy when confronted with the prospect of murdering Arthur (Tyler Holland).

Surrounded by these strong women is the eponymous King John, played beautifully with cocky Mancunian malevolence by Danny Childs. He struts around the stage with the arrogance of a premier league striker (the resemblance to Jamie Vardy is weirdly analogous), before sinking to his gruesome death at the close.

Inevitably with an experimental presentation of this type, there were some areas that fell flat. Plastic balls representing battle felt a bit Edinburgh fringe and some of the supporting characters were poorly drawn and lacking the desired humour, but Bradbury mostly compliments the strong cast with visually decisions in the staging of the piece. The small audience acted as courtiers throughout, seated in a horseshoe around the stage at dressed trestle tables and encouraged to cheer for either England or France, according to their preference. Union Jack flags and the French Tricolour may be historically inaccurate, but are great fun to wave throughout the evening.

Similarly, the choice of Elton John, Queen and a selection of ‘80’s rock tracks wouldn’t be the obvious choice of soundtrack to accompany Shakespeare, but with a clear nod to musical theatre tradition (Hamilton, take a bow) it worked well. Lighting in the Hope Aria’s old mill was restricted to torches and standard lamps and created a suitably gloomy, atmospheric setting.

Overall, an innovative interpretation by a company with a talent for presenting this underperformed classic in an accessible way.