My Mother Said I Never Should - Altrincham Garrick Playhouse

Residents of Altrincham and surrounding areas are lucky to have a local theatre that delivers countless high quality productions one after the other with a ticket price which is under £10 a head for opening nights. The Altrincham Garrick Playhouse not only entertains with exceptional productions but also offers reasonably priced tickets meaning it’s affordable too, which is so important when it comes to the arts.

The Garrick’s latest production; My Mother Said I Never Should by Charlotte Keatley was first performed in 1987 and explores the relationship between mothers and daughters, covering everything from teenage pregnancy to generations and their traditions; set against the social changes of the 20th Century.

The cast of four deliver a fascinating account throughout, with each mother and daughter having a different set of values and secrets. The eldest mother; Doris Partington was played by Garrick regular Margaret Leslie alongside her on stage daughter; Margaret played by Sarah Broughton. 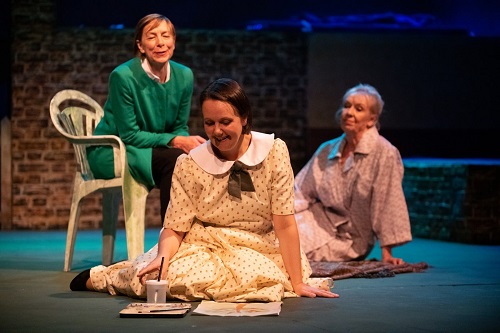 They accurately portrayed a mother/ daughter relationship throughout; like Margaret and her on stage daughter; Jackie played by Kathryn Worthington who in the play has a child out of wedlock; Rosie played by Meg Brassington. All four women play their roles with charisma and energy, some scenes call for the actors to act out as young children which i appreciate is hard to master but all four deliver a solid performance, impressive.

As always, a lot of thought and work goes into delivering these productions and once again the staging was well thought out and versatile; featuring two tiers and a huge video backdrop behind which alternates from London streets to Hulme high rise flats, proving very effective at setting the scene.

I think the play was a little slow and lacked the juicy storyline which these talented actors deserved but I did appreciate the exploration of the relationship between mothers and daughters which most in the audience would be able to relate to in some form.

The production value at the Garrick is always high and Director; John Chidgey made sure this is still the case but me for I would have preferred a play which really shows this cast for the stars they are.

Verdict: The Cast and Creative Team deliver as always but the story isn’t for everyone!