When first staged in 1888, 'Miss Julie' caused a sensation in Strindberg's native Stockholm, with its exploration of sex, the class system and the tragic consequences of a brief 'upstairs/downstairs encounter. Reviled at the time, over the course of the ensuing century it has come to be regarded as a classic text and a defining example of 'naturalism' in theatre, with Strindberg heavily influencing many of the great playwrights that followed him. It is hard to imagine Tennessee Williams, Arthur Miller or Eugene O'Neil being seen as the 'big three' of 20th Century American theatre, without them having the example set by August Strindberg. 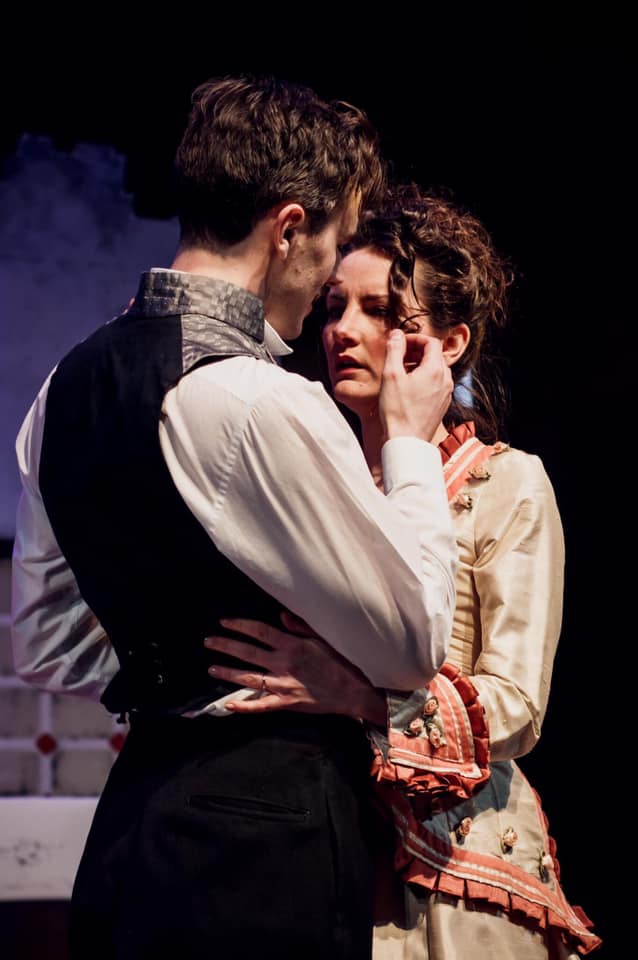 Modern revivals of this piece tend to re-imagine the setting to give it relevance to the audience; post-Apartheid South Africa, Northern Ireland during the troubles and a birthday party in modern London have all formed the backdrop in the last decade. It is refreshing to see the Elysium Theatre Company stripping this device away and showing in the characters in their original time-frame, albeit in a manor house in the north east of England. The one set Victorian kitchen by Designer Louis Price, melds perfectly into the plaster walls and brickwork of Hope Mill Theatre and provides delightful intimacy for the small audience as well as the 'small stage and small auditorium' that Strindberg demanded for his production.

We meet the eponymous Julie (Alice Frankham) at her grand country home, a flighty and flirty 25 year old, who proceeds to seduce her father’s valet John (Danny Solomon) with dire consequences for their respective social positions. It is easy to see why 19th Century Scandinavian society would have been scandalised by this plot with its subversion of class norms and Director Jake Murray retains some of that shock value through the decision to retain the period setting.

Strindberg presents these two characters in a dizzying variety of ways through the course of the play. We are initially drawn to John as an example of a meritocrat, determined to pull himself up the ladder and achieve his dream of social status through talent and hard work. Slowly he is revealed to be more manipulative and calculating in his seduction of Julie, rather than the innocent valet we first assumed. Solomon displays this shift strongly, the early tight body language of a servant slowly disappearing to reveal a domineering thief and bully with a strong misogynistic streak.

Julie is a classic role in European theatre, but with her wildly swinging moods and exaggerated actions, a modern actor runs the risk of descending into parody. Frankham treads this difficult line well; Julie's erratic behaviour is still annoying, but the naturalistic exploration of her upbringing is well rendered and give a certain logic to her reactions. Indeed, this production explicitly explores the misandry she displays with the revelation she is 'prey to her desires', hinting at nymphomania and 'hate sex' as a root psychological cause for both her behaviour and earlier relationship issues. Both actors comfortably convey the contradictory elements of their characters and are strongly supported by Christine (Lois Mackie), the cook and fiancé to John, who clings to her social status despite his callous behaviour.

However despite the uniform excellence of the performances, there is no denying that the conclusion that arises from their brief encounter feels jarring and disproportionate to the event that caused it. Julie's eventual decision and fate are overblown according to any modern sensibility, and this makes it difficult for the audience to accept the motivation of the characters for their final actions. A strong production of a play that leaves more questions than it answers.

Verdict: An intimate and faithful exploration of a flawed masterpiece.