Disturbing, affecting, profound and thought-provoking. This is a story of six US citizens who were wrongly convicted of murder, who served up to 22 years in prison, before being exonerated and released back into society. It was written by Jessica Blank and Eric Jensen, who – in 2000 – interviewed 40 former death row inmates. The six interwoven stories that make up the basis for Exonerated are based on fact.

This challenging piece was directed by Hope Mill’s co-founder, Joseph Houston, who has given the show an aura of dark artistry. Everything works symbiotically towards creating a starkly oppressive, chilling and hauntingly memorable atmosphere. The stage design is simple yet effective: the actors are permanently caged behind a chain link fence and barbed wire, which very realistically conveys a prison setting. The audience are on two sides of this cage, opposite, but segregated, which generates a feeling of confinement. It is isolating and gives the illusion of being behind bars. When the lights are down all you can see is the wire mesh, but when the lights go up the actors become visible, eerily already in situ. 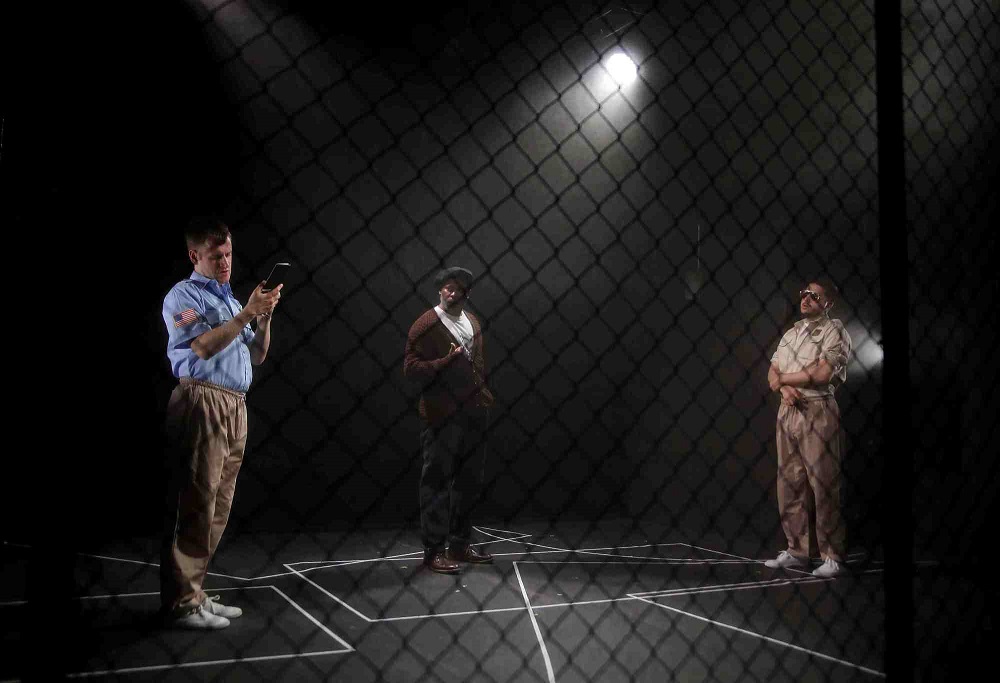 Above the set is a screen, on which interviews with the former convicts are shown. They are so convincingly staged it took me a few minutes to realise they were actors rather than the real people themselves. As it is a standard television, rather than a stadium-sized arena screen, after a few minutes you are lulled into thinking you’re watching a TV documentary at home, but then unexpectedly and without warning, the lighting is used to great effect to suddenly flood the set along with the aural cue of the sharp crack of a judge’s gavel and you are thrust back into the theatre experience, as the interviews are punctuated by sudden snippets of live action to underline and illustrate certain points in the tellers’ stories.

As the interviews are mixed in together, I found it a little slow at first, jumping between the various interviewees and laying out the background of their individual cases, but it did become engrossing as the true horror of the stories unfolded. Probably the most memorable being that of the only woman, Sunny Jacobs, who was arrested with her common law husband, Jesse Tafero, accused of shooting two police officers. The murders were committed by a third party who blamed them, but later retracted his statement three times, which each time was ignored. Tafero was notoriously executed via electric chair, which either went wrong or was rigged, as it took three attempts to kill him. Flames leapt out of his head, smoke billowed out of his ears and the place smelt of burning flesh for weeks; he was basically incinerated from the inside. This infamous scenario inspired Stephen King in The Green Mile. Sunny had her own death sentence reduced to life imprisonment, then in 1992 she pleaded guilty to second degree murder and was released having served sufficient time. Despite being included in the script, she was not exonerated. All of the stories are dark, disturbing and compelling. They tell of coerced confessions, victimisation, rape, manipulation and a justice system which has failed and of lives destroyed.

The acting on the stage is of a very high standard, with most of the actors playing multiple roles with ease. My only problem is that I’m not totally convinced the two mediums of the cinematic and the theatrical marry up all that successfully. For me, I think either a play or an audio-visual presentation might have been better, although this is certainly a unique approach, but I was so immersed in the on-screen narratives that it was quite jarring to be suddenly pulled back to the live action and I sometimes felt it was disjointed. The interview footage made up well over half of the play and I didn’t feel like many of the scenes on the stage were necessary or added very much. This is a criticism of the scripting and not in any way the fine actors. I found myself far more engaged with the screen, which – during the stage sequences – showed starkly beautiful, harshly poetic pictures of fences, locked gates or birds on telegraph wires: monochrome images of incarceration and glimpsed freedom which I thought added another element to this already artistically rich show.

The lady next to me whispered: “I hope it has a happy ending.” We know from the title that the interviewees are granted their freedom, but it isn’t in any way a ‘happy ending’, as they have lived through experiences that you just wouldn’t get over. They are mentally and physically scared and have been robbed of years of their lives.

Rounding off the audio-visual aspect, is a heavily ironic burst of “God Bless America” followed by the shocking statistics: “Since 1976, 1,499 people have been executed in the US” and “Since 1973, 165 people have been released from Death Row with evidence of their innocence”.

It’s not easy viewing, but it is eye opening. If you’re looking for a light-hearted feel good show I’d avoid this, because it’s not all that big on laughs. However, if you’re looking for something artistic, thought-provoking and severely memorable, then this might be for you. It is a challenging, brave, brutal and beautifully crafted play. You won’t forget it in a hurry. These were ordinary people whose lives were destroyed, simply because they were in the wrong place at the wrong time and it could happen to you.