Things I Know to Be True - Altrincham Garrick

The family drama has been a staple around the world. This play written by Andrew Bovell is set in modern day Australia. The set by Juliet Jones is lovely and the entire play takes place in the family’s garden, however despite how nice the set looks, the play is filled with sadness.

At the centre of the play is the Price family, who despite appearances have more than their fair share of problems. Bob (Charlie Tomlinson) has been laid off from his job as a car salesman and now takes pride in his garden, while his wife Fran (Brigid Hemmingway) works as a senior nurse, who always has an opinion.

The couple have four children; Rosie (Megan Relph) - the youngest, who has recently returned from a backpacking trip across Europe, Pip - the oldest, who despite having a husband and two children is contemplating starting a new life without them in Vancouver, Mark - who is struggling with his gender identity and Ben - who has recently become involved in a dodgy financial scandal at work. 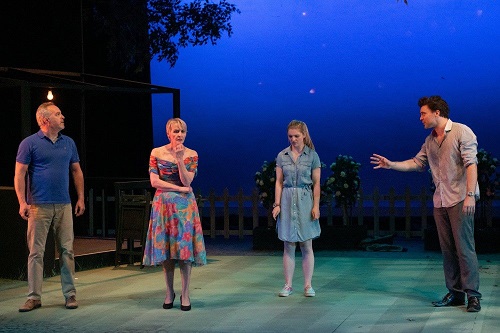 From Bovell’s writing it’s clear that the parents have got high expectations of their children and each of their problems comes as a shock to them. However, there is something very real about the play that it could be any family all over the world.

Although I felt the story was told very well, I think this production lacked strong direction. The movement between the cast on stage was quite poor at times. Some of the cast members didn’t know what to do with their hands, which to me looked really awkward at times. I think it would come across a lot better if the characters were doing something while talking.

The mother; Fran is very much the dominant force in this play. However, I’m not entirely sure about Hemmingway in the role. She was great in some scenes and then others wasn’t great at all - she threw away a lot of important lines that had loads of hidden meaning to them. As an actor it’s simply not enough to know the lines, you need to know which ones are the important ones and how to deliver them.

One thing I found quite strange about this production was that the programme stated it was set in Australia, however it could be set in any suburban location. However, all the Australian references and locations were left in this play, but the cast used English accents. I would have changed all the Australian references to British ones to make the play more accessible to the audience that will being seeing this.