As the cast of Summer Holiday belt out Let Us Take You for a Ride on the steps of the Bolton’s historic Albert Halls it’s clear that this stage version of the classic movie is the perfect antidote to our troubled times.

The movie starring living legend Sir Cliff Richard is many people’s guilty celluloid pleasure and here it is reworked to tell the tale of Don and his gang of Boltonian grease moneys doing up a bus for a trip round Europe. On the way they meet up with singing trio Do-Ri-Me, and take in a on the run American pop star Barbara, who is disguised as the most unconvincing boy ever.

Co-directors Elizabeth Newman and Ben Occhipiniti’s smart idea was to turn this old school romp into a site specific event with Bolton as one of the stars of the show. So as the familiar words of Summer Holiday ring through the town’s brand new bus interchange the audience are loaded onto six buses for a trip round to the Town Square, complete with a lusty Cliff singalong with a cast member, before disembarking as Do-Ri-Me meet the lads before the bus sets off for Athens. 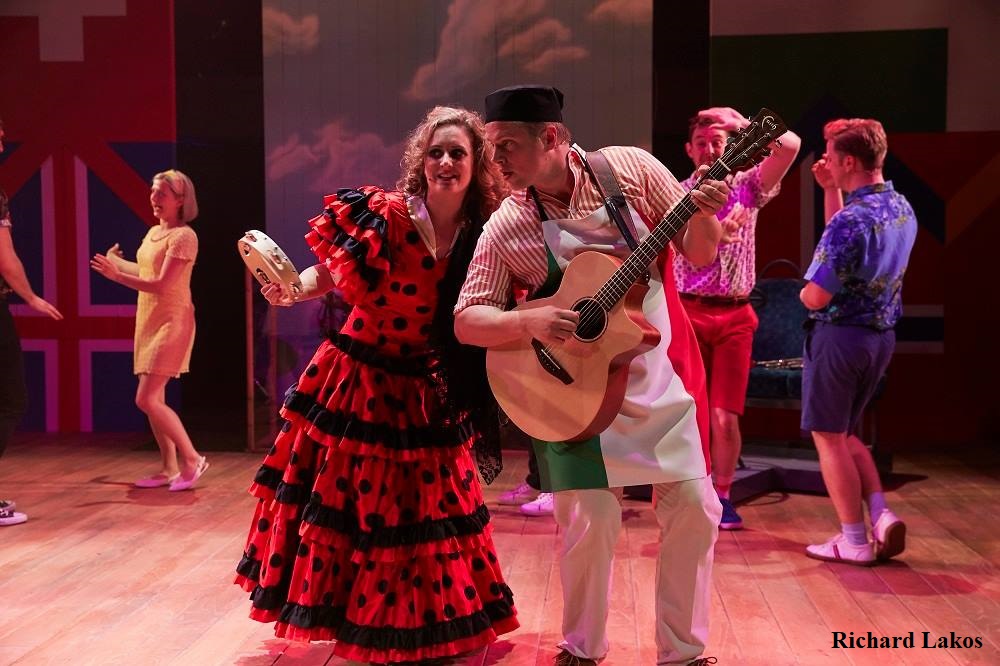 The directors have resisted the urge to make Summer Holiday arch rightly playing the innocence and fun absolutely straight as the audience wander back to the Octagon for the rest of the last show before the theatre goes dark for a much needed refurb. Their only real nods to modernity are two of the male characters fall in love along with all their mates, and the women in this version are full and equal members of the gang rather than bit players like their movie counterparts.

Octagon regular Michael Peavoy is a rougher, more vulnerable version of Cliff’s Don anchoring the gang’s madcap antics, as well as nailing big numbers like the rousing Bachelor Boy. His duet with Eleanor Brown’s perky Barbara on A Swinging Affair is a delight, drawing warm applause from a hyped up crowd, most of who probably saw the movie first time round.

The rest of the lively actors/musicians gamely swap instruments, do Shadows style walking dances and move bits of Amanda Stoodley’s colourful set trundling iconic images on and off to trace their journey across the continent. They are having just as much fun as the audience who sing along to all the hits, including a slowed down, moody version of The Young Ones.

If you’re a Sir Cliff fan you will love this joyful, old fashioned show packed full of classic pop hits that is really all about the value of friendship, and sticking together, which we need a lot more of these days. If you’re not a fan of the tanned hit machine you’ll still leave with a huge smile on your face thanks to a hard-working and charming cast who prove the young ones have plenty of talent.

Summer Holiday is at Bolton Octagon until Saturday 23rd June. To book 01204 520661 or visit https://octagonbolton.co.uk/whats-on/theatre/summer-holiday/