First thing that comes to mind when you hear the word 'eggs'; fried eggs, chickens, spring, birth, mothers, fertility. Females. It is the one thing that unites women biologically, the very thing they carry in their bodies, the potential of life and the essence of themselves. But are women destined to reproduce, purely because they make eggs? In this one act play, we follow the lives of two best friends, who are polar opposites of one another, and their different views on the topics of fertility and having children. Girl one (Emily Curtis) is the free-spirited, slightly dis-functional, character that was born as a result of an IVF procedure, which skews her outlook on the idea of fertility; if being a woman is about providing eggs, what happens if you can’t even do that? Her views bring to question what actually makes you a woman? Strip you of your biology, and what is left? On the flip side, Girl Two (Lauren-Nicole Mayes) is the traditional, career-driven woman who aspires to live a normal home life with a husband and child, however, these ideals are not exactly her own, but the ideals of society. 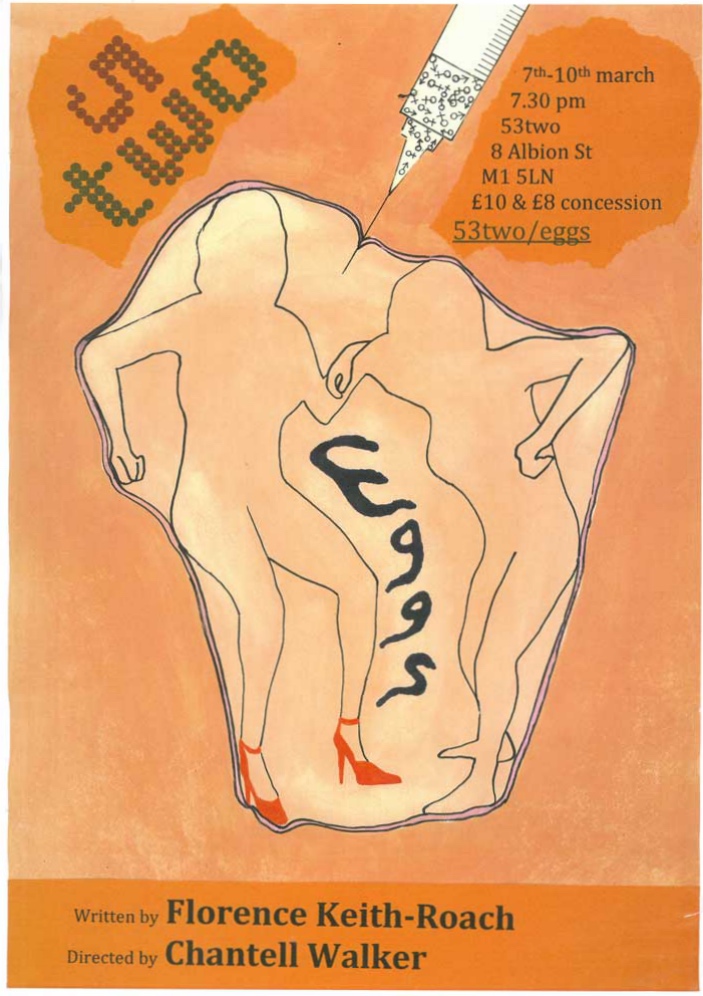 The ‘egg’ theme runs throughout the entire play, cleverly adopted through props, paintings, and head-lice incidents. The stage is set up as two bedrooms on opposite sides of the space, both filled with anything you can expect to find in a girl’s bedroom! The excellent use of colour was effective against the black backdrop, and wasn’t too distracting, every prop was chosen with care. Fantastic music choices were made, a sweet nostalgia of the 90’s era echoed throughout the play, which heightened the girl power vibes. The scene transitions were slick, and the actors used good use of the space; overall great direction from Chantell Walker. I would also like to mention the well timed and choreographed arrangement of the music and lightning, coordinated by Mark Simpson.

My only critique for this play was that I didn’t feel enough depth; the story had great intentions and ideologies, but I wished it could have been explored further, it seemed to have just scraped the surface for me, and I believe the story of the play could have developed even more- perhaps I just didn’t want it to end! However, this does not dampen the outstanding and admirable performances of both Curtis and Mayes. Their performances really made the show, their sheer enthusiasm and energy brought so much life to this play! Their emotions were heart-felt and true. Fabulous chemistry and extremely likeable, I felt like they were my friends on stage, and because of that, it gave me a warm feeling and a sense of belonging. So, referring back to my earlier question; if you take away the eggs, what makes you a woman? My answer would be the unbreakable bonds of friendship, and it is only women that can understand the emotional, unreasonable, crazy, brilliant minds that they have, and it’s this that unites them.

A heart-warming and feel good play, that makes you want to call your best friend and tell them how much you love them! A brilliant way to celebrate National Women’s Week.