Tonight I watched ‘The Replacement Child’ brought to Hope Mill Theatre by Abooo Theatre. Abooo Theatre place an emphasis on telling the story of parenting, and this was done in an incredibly moving and powerful way.

With just four cast members in the play, we see them tell the story through three different scenes, one which shows Grace – the replacement child- played by Caroline Read, sitting down at a table and asking her father, Oscar, played by Rupert Hill questions about her childhood and the fate of her mother, Jude, played by Clare Cameron. Grace has not seen her father for many years and we learn that he didn’t call on her eighteenth birthday last week. The audience is then taken to the back of the stage where a hospital bed is situated, and the scene showing the labour and birth of Grace takes place. I thought the way in which the story was told here was extremely clever, as Oscar leaves the table and joins the scene in the hospital, all whilst Grace watches what happens to her mother and father. The focus from Grace’s character was amazing here, as she interrupted at specific moments to ask more questions. From here, we are then taken to a home setting which is depicted by a bright orange sofa. We learn that Jude is a very superstitious character, and keeps receiving white lilies at her door, indicating the ‘lily of the valley.’ 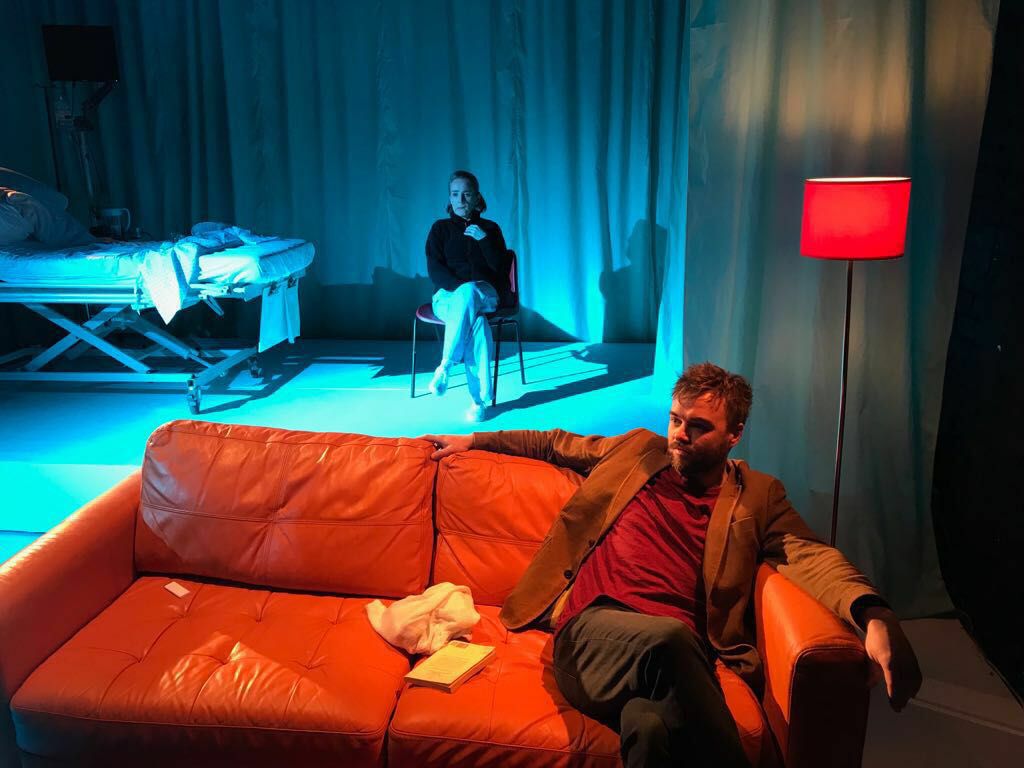 We are then transported back to the hospital scene where the midwife Carol, played by Julia Haworth, asks Oscar a question about his previous child. Julia Haworth plays this role sensitively and convincingly, asking all the right questions and being helpful to Jude in labour. After a short while, Oscar reveals to her that the previous child died, and then later we see him telling Grace that the name of the child was Stella.

In the scenes taking place in the home we see more arguing between the couple, and learn that the first time Jude was pregnant she was very depressed. The anger rose and truths were told, particularly the importance that the baby Jude was now expecting would not ‘replace’ Stella.

Through an emotive and moving monologue at the end by Oscar, we learn that Stella died and that Oscar had been holding her, and that Jude had found her in her cot. This monologue was delivered so realistically and emotively, it was as if it pained him to have to tell Grace, and that was why he had been holding it back for many years. The line ‘scalding silence’ has stuck with me.

We are then finally taken to the birth of Grace, where she is delivered fine but Jude is in trouble. As she is giving birth, Jude tells the midwife that she is scared, and I thought this was very honest of her to admit to. Oscar comes back at the last minute, having gone out to get some air and returns to his child, whilst Jude is rushed to theatre. We then find out that she has died, and that it is just Oscar and Grace left on the orange sofa.

The lighting choices of the show made it easy for the audience to distinguish what was going on in each scene, and I particularly liked how as soon as Carol stated there was a problem with Jude’s placenta the lighting went red, in order to show an emergency. The clothing of each character was also an important and deliberate choice that was noticed, as Grace wore the same jumper as Jude to show their connection and that this was all that she had left of her, whilst Oscar wore the same colours in a t-shirt and blazer. I really like the idea given by Abooo Theatre that allows accessible work to its actors who are parents, and that there is a toddler friendly showing of the show later in the week during its run. I’m disappointed I cannot attend this as I would love to have seen how it compares to this piece.