Certainly a play to be watching at this grey and unforgiving time of year, Roland Schimmelpfennig’s Winter Solstice starts as a witty and above-average family drama at Christmas-time but slowly unravels to become a much more sophisticated comment on the rise of the alt-right and the tendency for leftism to become overly introspective.

We are welcomed into the home of Bettina and Albert, a predominantly left-wing upper middle class family of a history writer and a film-maker not without their self-perceived struggles. A dark biting comedy ensues when Bettina’s mother Corinna comes to stay on Christmas Eve, inconveniently having invited a complete stranger she met on the train to join them.

Seemingly delightful, the stranger, Rudolph (played expertly by David Beames), charms his way into the family’s private evening with only occasional halting quips about how murder is acceptable if it’s for ‘the greater good’ between renditions of Bach and Chopin on the piano. 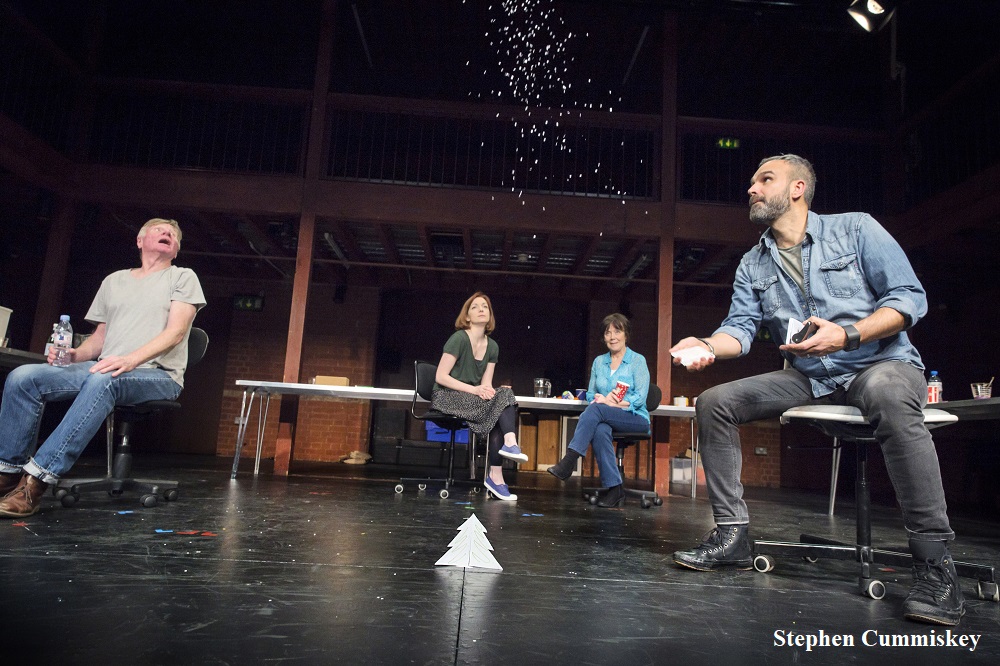 Albert (played by the very sharp Felix Hayes) who is writing a book on Auschwitz and has another called, ‘The Past is The Future’, is the only one who can see Rudolph for what he is but he and the other narrators on stage become increasingly unreliable as we learn they have a tendency for melodrama, infidelity, alcohol, or even prescription pill addiction and potential hallucinations so Rudolph’s character and agenda is left to the audience’s judgement call.

The whole play takes place in the mind’s eye of the audience, in fact. The set design is just simple trestle tables covered in stationary and snacks. There isn’t a stage; there are ladders and boards stacked at the back for a real rehearsal room effect. The lighting and sound too are very simple. Contrastingly, Winter Solstice experiments hugely with form, the characters each narrating the description and subtext as well as acting. The dialogue alone creates the image of set and action in the audience’s mind.

The actors are not without skill despite the seemingly casual setup. They each have exceptional characterisation and precision in order to switch between their character and the narration, or run parallel scenes, although there were a couple of unpolished moments where that suspension of disbelief was broken.

Winter Solstice is farcical as much as it is philosophical, with a slightly too long first half slowly building up to the crescendo in the final scene. Drawing some similarities to Yasmina Reza’s ‘Art’ in themes, the tension finally shatters when friend and artist Konrad slashes a painting he’d gifted to the family in a Rudolph-lead drunken discussion on the ‘duty of mankind’.

An above average family drama would have ended there as a piece about loneliness, longing and the intricacies of family tensions at Christmas time; but Winter Solstice had to live up to its title. The welcome and surprising ending-reveal post-painting slashing is when the forms of the play seem to merge and finally become whole. The previous non-naturalism dissolves and real props and set are brought on, a Christmas tree, burning candles, glasses, wine, and costumes. From that point the play is narrated from the (unseen) daughter of the family via voice recording. A new dawn from the eyes of an innocent child, a solstice.

Winter Solstice continues at HOME until the 17th February - https://homemcr.org/production/winter-solstice