Mental is one family’s experience of mental illness. The leading man, Kane, describes Mental as a ‘series of stories and songs’ and it is, in its simplest form, a musical representation of a son’s experiences of his mother’s bipolar disorder.

Mental opens with a soundscape of clinical recordings with therapists and doctors interwoven with private voicemails between a mother and son. The piece continues to make links between common medical terms that don’t really mean a lot to most people and the very, very personal.

Visually Mental scatters personal items like photographs, items of clothing and notes and mapping them all out on a graph that lit up behind the set. The graph provides a useful visual aid on the parameters of standards emotional range compared with those of someone with bipolar. Boxes too are scattered around the set. They become a metaphor for Kane’s mother ‘opening the box’ on her thoughts that she is frequently quashing in an effort to lead a more conventional life. Opening the boxes in different areas of the stage follow Kane through stages in his life that he remembers his mother’s episodes from. We have memories from all ages, and not all of them are flattering, which gives Mental even more of a pathos. 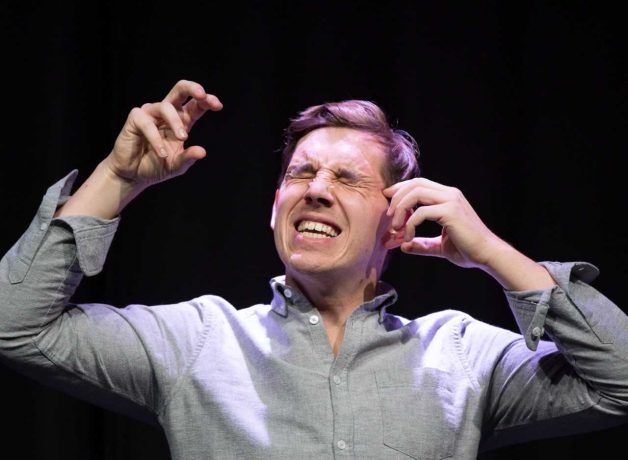 Kane himself is very clean in his delivery, quite clinical even, which he later discusses at length the effects of disassociation and desensitisation towards his mother’s illness and how that in itself can be problematic. Other difficult subjects unpacked on stage are the effects of stigma, loneliness, awareness, medication and relationships.

At its heart though Mental is a piece of musical theatre. Kane’s story is brought to life by songs that are designed to invoke different symptoms of mania and psychosis. With the help of a loop pedal huge soundscapes are created: there is a song about how escalating mania can be like going to a rave and onto an other-worldly experience altogether, another is reminiscent of his child self crying for his mother to ‘come home now’. My highlight though has to be the exceptionally tight piece of performance poetry about the different medicines commonly prescribed to manage bipolar disorder and their side effects.

The very smart role of word-play in that poem and throughout are a hark to his mother herself, as of course is the whole play, who he quotes saying she loves words, punning and rhyming and how her mania often manifests itself in her language. Some linguistic gymnastic highlights from Kim Power include that a mental disease is just that, a dis-ease with the world.

After a three day run at HOME, Mental continues to tour the UK and I highly recommend anyone goes to see it, it will deepen anybody’s understanding of mental health and truly nurtures the personal nature of illness and its effects on a family.

Remi Adefeyisan from Truth Be Told will be on BBC Radio 3’s The Verb tomorrow evening at 10pm. The link is here: http://www.bbc.co.uk/programmes/b09mjls5