It was a slightly surreal moment for me to be dragged on stage to have my head plummeted by a pair of huge fake boobs.

Now, if you think I was at one of the numerous local pantos you would dead wrong as I was getting whacked on the head by Hot Brown Honey MC  and creator Busty Beatz’ s fake breasts as part of the company’s relentless assault on patriarchy, racial stereotypes, sexist imagery and colonialism.

If all this sounds a bit pious you would also be wrong as this troupe of six Australian women of colour, from very different backgrounds, turn the space into a riotous club night packed with fun, music and a large dollop of sexual politics.

Busty is the Queen Bee perched on top of a massive beehive set that flashes up messages as she encourages the audience to join a series of call and responses that really pump the crowd up as the other five performers beatbox, sing, dance and even hula hoop as they challenge our thinking. 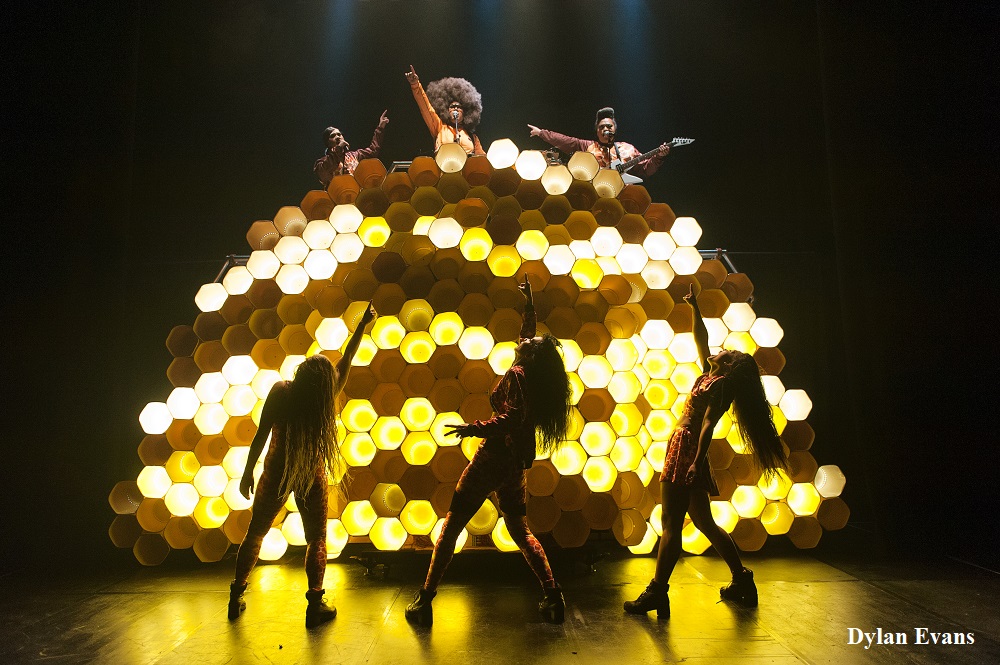 As well as performing co-creator Lisa Fa’alafi directs this show, that adds our colonial past as something for middle class Northerners to think about, so there is something profoundly moving watching an Aboriginal woman wriggling free of the tight constraints of a dress made out of an Australian flag. It’s a reminder that that it is only as recently as 2008 that the Australian government – the successors of British colonialists – have apologised for their treatment of that country’s indigenous people.

There is a very smart reverse strip where a Polynesian woman tramples all over our western stereotypes about dusky, meek Pacific women stomping  round the stage like an island Beyoncé.

Circus skills are all too often thrown into shows just to add a bit of sparkle, but here Crystal Stacey’s skilled and emotive aerial ballet on the straps gives a voice as she flies across the stage to victims of sexual and domestic violence who are all too often never heard until it is too late.

This is a million miles away from the Spice Girls’ insipid version of girl power, and as the women chant ‘don’t the touch my hair, whatever you do’ – even throwing in some metal guitar – you know that is a request which you would do well to heed.

Not everything in this show works, but when it does it is the perfect antidote to risky jokes over in panto land. There is so much to consider during - and after - this show, and Busty suggests that if we all do something small to change things it can make a difference in these troubled times.

The Honeys force us on this side of the world to think about the impact of our colonial past that is still having an impact today centuries after the first colonialists spread their poison across the Pacific region.