Ella Hickson’s collection of monologues, ‘EIGHT’, has come to Manchester’s 53two theatre, directed by Chris Lawson. Designed to portray the ‘state of the nation’ it stops just short of tackling interesting topics head on.

This play’s USP is that the audience chooses whose story is told, and who sits on stage wordlessly for the entirely performance. Upon arrival we’re given a menu of eight options, with brief character descriptions, and then vote for the four stories we’d like to hear.

This whimsical device seems appealing at first, but soon reveals itself to be an empty gimmick. 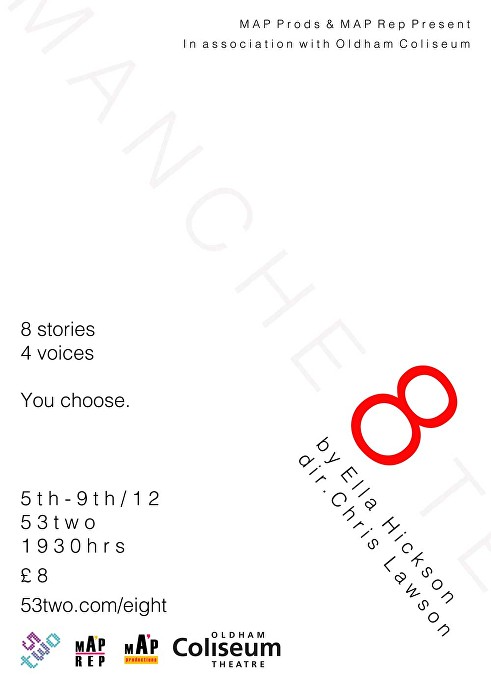 As time goes on it becomes increasingly apparent that ‘EIGHT’ has no unified structure, no greater concept or question; the monologues are isolated snapshots that offer potential but fail to actually deliver. The fact that there’s a different line-up for every performance makes it unpredictable for the actors, no doubt, but adds little to the audience experience.

The addition of the fifth monologue at the end – from a new character outside of the original eight – is not a smart twist, or a comment upon expectations, it’s just another monologue that skims the surface. This is particularly disappointing, as we see the exuberant performativity of the gay art dealer battle with the genuine shock and heartbreak of discovering his boyfriend had committed suicide, but at this length it was never going to deliver.

Each monologue follows a similar, repetitive arch: an exposition, a development, a climax (through an explosion, argument, sex, or death) then an emotional (if a little weak) resolution. Characters alternate between retrospective storytelling and reliving epiphanies with little explanation – the ambiguity here is convenient.

This play’s success was limited by the emotional ceiling hit by almost all characters. Although the single mother was heartfelt and believable, the lovesick teen who started this particular performance seriously overshot the mark, resulting in very laboured and immature characterisation.

The individual monologues do have potential as Hickson touches upon some interesting viewpoints and angles – the 7/7 survivor could have been one of them. A high-flying banker who derails and suffers memory loss for three years after a terrorist incident could be a valuable perspective, but this opportunity is thrown away by implausible detail. The banker recalls the moments before Hasib Hussain detonated the bomb that killed 13 out of the 52 victims on 7 July 2005.

Real CCTV footage from that day shows the agitated man buying a replacement battery in a panic to fix his explosive device. Hickson, instead, replaces and romanticises this with a mars bar; Hussain, intent upon committing a large-scale attack, apparently stops to enjoy his final mars bar before stepping on the bus. Need I say more?

I understand why ‘EIGHT’ with all its novelty and variety would be popular, but it comes across as a playwright’s first attempt. It has potential to observe and question important aspects of the current UK culture and ‘Generation Y’ but it’s by no means a finished product.

‘EIGHT’ is a play of missed opportunities due to two significant absences: challenge and tension. What conflict there is in each monologue is not fully utilised and the monologues consequently lack complexity.

The problem with a collection such as this, is that it’ll only ever be a strong as its weakest character. In some performances it may be omitted, but in others it’ll take centre stage.