Written by Ian Hislop and Nick Newman ‘The Wipers Times’ has been fifteen years in development, already an accomplished film the story has now been presented as a stage play which is currently touring following a successful run in London’s west End.

The Wiper Times tells the remarkable but obscure true story of Captain Fred Roberts and his charge, the 24th division of the Sherwood Foresters. Despite being quite literally under fire from the enemy at the front line of the Great War and scorned in some quarters of the upper ranks, Roberts and his unit managed to produce an astounding 23 issues of their popular satirical trench newspaper (The Wiper Times) between 1916 and 1918. 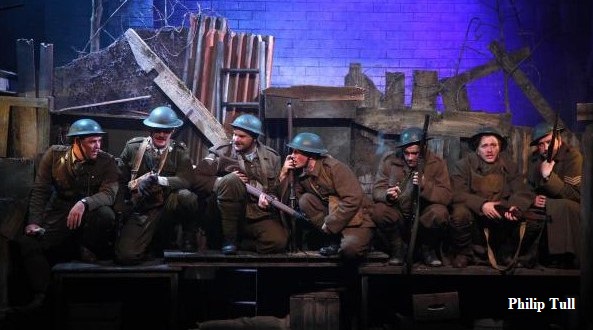 While in the trenches at Ypres the discovery of a printing press inspires Roberts to create a publication aimed at supporting his fellows at arms by delivering a much needed dose of humour into their otherwise desperate and futile existence.

The main targets of the newspaper’s barb are the Hun (German Soldiers), the cosseted high command of the British Army and the ‘It will all be over by Christmas’ War commentary ‘experts’. Skits inspired by actual pieces from the original paper intersperse the narrative which focusses more on Roberts and his biography. These skits are extremely entertaining and were for me the most successful elements of the production in revealing to us in an honest authentic way how people in the most horrific unimaginable circumstances used a shared sense of humour to help them through.

The scene entitled ‘Proof We Are Winning The War by Belary Helloc’ was hilarious. The message is clearly conveyed that for its readers and contributors the Wipers Times was an important publication and the production itself seems to stay true to the voice that comes out of it.

Although there are moments when a dig or two at the Daily Mail remind us who the plays writers are, on the whole this is a reflection of a personal experience of the war rather than a critical comment upon it. It shares obvious common ground with Oh What a Lovely War! and Black Adder Goes Forth but sees the subject matter from a subtly but importantly different perspective. It allows a celebration of the resilience of humans without detracting from the futile struggle of war.

There are parts where I felt that the story was weighted in favour of a biography of Roberts rather than of the Wipers Times itself. Roberts deserves recognition for his story even without focus on The Wipers Times reveals much about what was given and taken by war (despite being awarded the Military Cross for Gallantry and Devotion to Duty Roberts was little documented post war).

A difficult balance to achieve in the time frame of a play but there were definitely enticing characters, material from the newspaper itself and events that were left undeveloped which left me wanting more.

The Wipers Times was a very professional production where the setting, choreography, lighting and sound masterfully contributed to the jarring contrast between bomb shelled dugout and music hall performances. The camaraderie among the men was convincingly portrayed and every transition was smoothly made packed full of authentic war songs and dynamic movement.

A good evening’s entertainment which provides a funny, authentic and original portrayal of The Great War from the perspective of Roberts and his men.