City of Manchester Opera is a company of professional, semi professional and trained amateur singers based in Manchester. They have more than 30 members of different nationalities, age and backgrounds, and where possible sing most of their repertoire in original languages. To date these have included French, German, Italian, Spanish and Russian. The passion and commitment is to share the marvellous music with as many people as possible.

Artistic Director: Nigel Machin – this is his 10th Opera under direction. Conductor/Musical Director: Juan Ortuño – since 2011

The Magic Flute is a fairy tale, with themes of love and of good versus evil. The opera is divided into two acts.

City of Manchester Opera played in the most exciting and versatile theatre Hope Mill –. Currently the most exquisite building in the theatre world which has hosted fantastic productions such as Parade, Hair and Yank. The Opera starts with Tamino, a prince, is alone in the woods, fleeing a deadly serpent. He faints but is saved by three ladies who are the attendants of the Queen of the Night. Tamino wakes up and hears someone coming: it's Papageno, a bird catcher. Tamino assumes that it was Papageno who saved him, and the two become friends. The three ladies return and explain that it was they who saved Tamino, and they give him a picture of Pamina, the Queen of the Night's daughter. 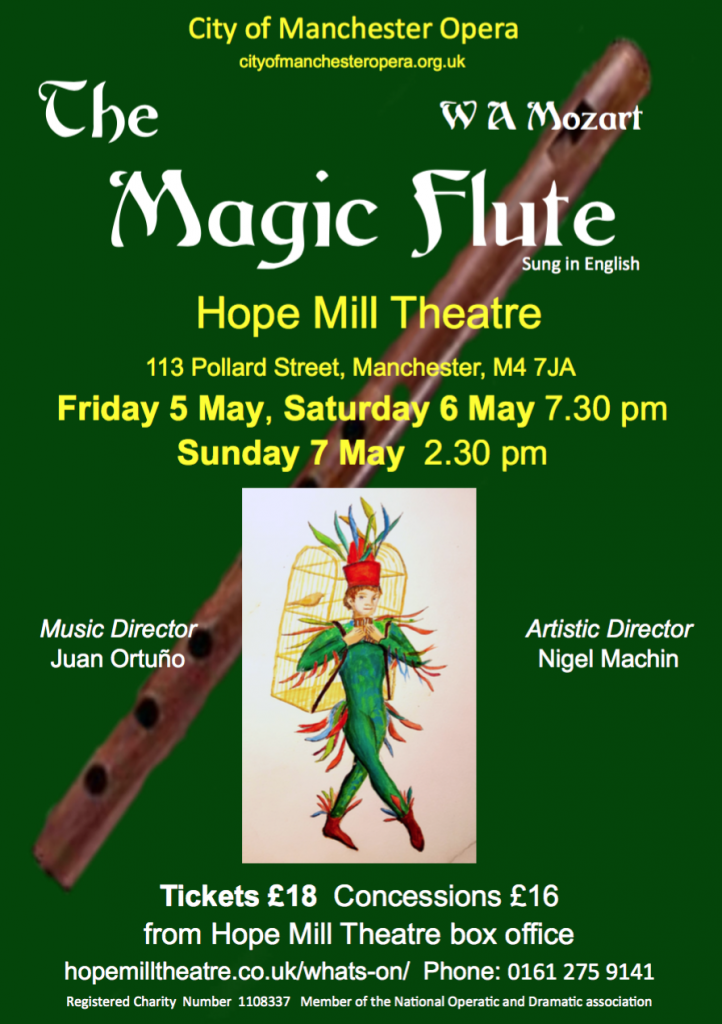 Tamino falls in love with the portrait, but is told that Pamina has been kidnapped by Sarastro, a high priest. Tamino vows to rescue Pamina. Hearing this, the Queen arrives and offers Tamino her daughter's hand in marriage if he is successful. To aid in their quest, Tamino is given a magic flute and Papageno is given a set of magic bells.

Tamino and Papageno are led to Sarastro's temple by three spirits. Papageno scouts ahead; he finds Pamina and he reassures her that she will soon be rescued. Tamino sneaks into the temple and goes in search of Papageno and Pamina. They all run into Sarastro and his followers. It turns out Sarastro is kind and wise, and he insists that Tamino must undergo a series of tests to prove himself worthy of Pamina.

With the series of tests about to begin, Sarastro explains that he kidnapped Pamina from her evil mother, the Queen of the Night, because Tamino and Pamina are meant to be together. Papageno is also promised a wife if he successfully completes the trials. In preparation, they must remain silent — Tamino and Papageno are not allowed to speak.

Meanwhile, The Queen appears before Pamina and tries to convince her to kill Sarastro. The Queen sings her famous aria, "Der Hölle Rache", which translates as "A hellish rage burns in my heart." But the Queen of the Night's efforts are in vain.

Tamino and Pamina meet again, but because he is not allowed to speak, Pamina fears Tamino no longer loves her. The three spirits reassure Pamina that Tamino does indeed love her. Tamino declares he is ready to be tested, and — together with Pamina — faces the trials of water and fire; with the aid of the eponymous magic flute, they are successful.

The Queen of the Night is angered by everyone's love and success; she returns to destroy the temple ... but she is cast out into the darkness forever. All is well, everyone is thankful, and they watch the sunrise together.

The most fantastic part of the evening was the 11 piece orchestra who played captivatingly throughout the performance directed by the talented Juan Ortuño.

The costumes where excellent but the staging however was basic and awkward as the scenes changed we saw people openly moving props and background, including the clumsiness of the three spirits being wheeled across the backdrop. The stage was similar to a school production with the hallow sounds that vibrated through Hope Mill as the actors came on and off the stage. The stage sides were exposed to see the character waiting in the wings awaiting their cue.

On a positive note the vocal tone was excellent however their acting talents did not match.

It was an interesting evening and I'm not sure how I feel about the production - it has lots of potential and it's clear a lot of hard work has gone into producing The Magic Flute. My highlights were definitely the orchestra, the venue and the costumes.

The Magic Flute continues until Sunday 7th May.