Don’t Cha Wish Your Scouser Was Boss Like Me? - 53Two, Manchester

Don’t Cha Wish Your Scouser Was Boss Like Me? is a hilarious one woman show currently playing at 53Two. It follows the story of Katie, a loud mouth Liverpudlian as she deals with finding love, schoolyard bullies and her Bestie that lives in her room. The play uses brilliant parody songs to move the narrative along and has the audience in stitches from start to finish.

A corner of the lovely 53Two venue is transformed into Katie’s bedroom for which the entire play is set. The audience are all seated on tables and chairs around it giving an incredibly relaxed and intimate feel to the show. This staging works immensely well as Katie frequently interacts with the audience and even encourages people to be on their phones tweeting and taking pictures. 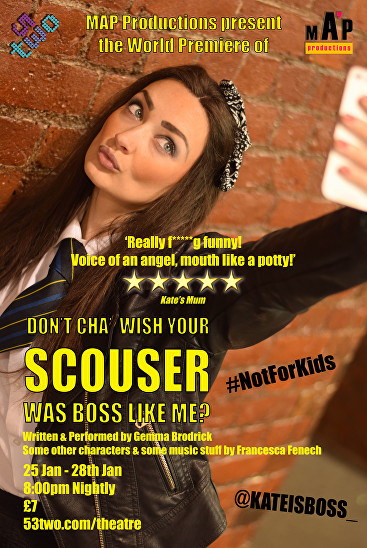 The show continues with this theme with jokes about social media and the ridiculousness of obsessions over Instagram, Facebook and taking selfies. The multimedia screen is regularly used showing the audience what Katie can see on her phone or laptop. This brilliant technique makes the audience cry with laughter at the relatable nonsense of a Facebook Like contest as well as watching her swipe through her tinder matches.

Although this is described as a one woman show there is also Francesca Fenech involved who is responsible for the music throughout. Her comic timing is perfect with her infrequent interjections and her use of music to enhance the humour when Katie is telling a story. The musical numbers are definitely the highlight featuring songs such as Circle of Life, Tomorrow and Part of Your World, all with their lyrics brilliantly changed.

The show is written and performed by Gemma Brodrick who clearly is a very talented woman and will go far in her career. The audience were thoroughly entertained and laughing from start to finish. The only negative part of the production was when it ended - it could easily be extended and not lose its charm. It is defiantly not to be missed and is playing until the 28th January.