Most people will be familiar with the Boris Karloff/Herman Munster-esque image of Frankenstein's monster. Tonight's Monster, created by Blackeyed Theatre, bore no resemblance to either of those previous incarnations but 'he' was extremely effective and I won't forget him for a long time!

The show tonight was imaginatively done with excellent use of lighting and live music/percussion which was used to great effect.

I have never read Frankenstein so I did some research on Mary Shelley's masterpiece which is considered by some Historians to be the first science fiction novel. I was a little dismayed on reading the synopsis as I thought it sounded quite protracted and I wasn't sure whether I would enjoy tonight's show. I'm glad to say I was proved wrong.

The story itself is an English literature classic, with themes of revenge and the use of knowledge for either good or evil. It is a Gothic novel and is also full of symbolism. 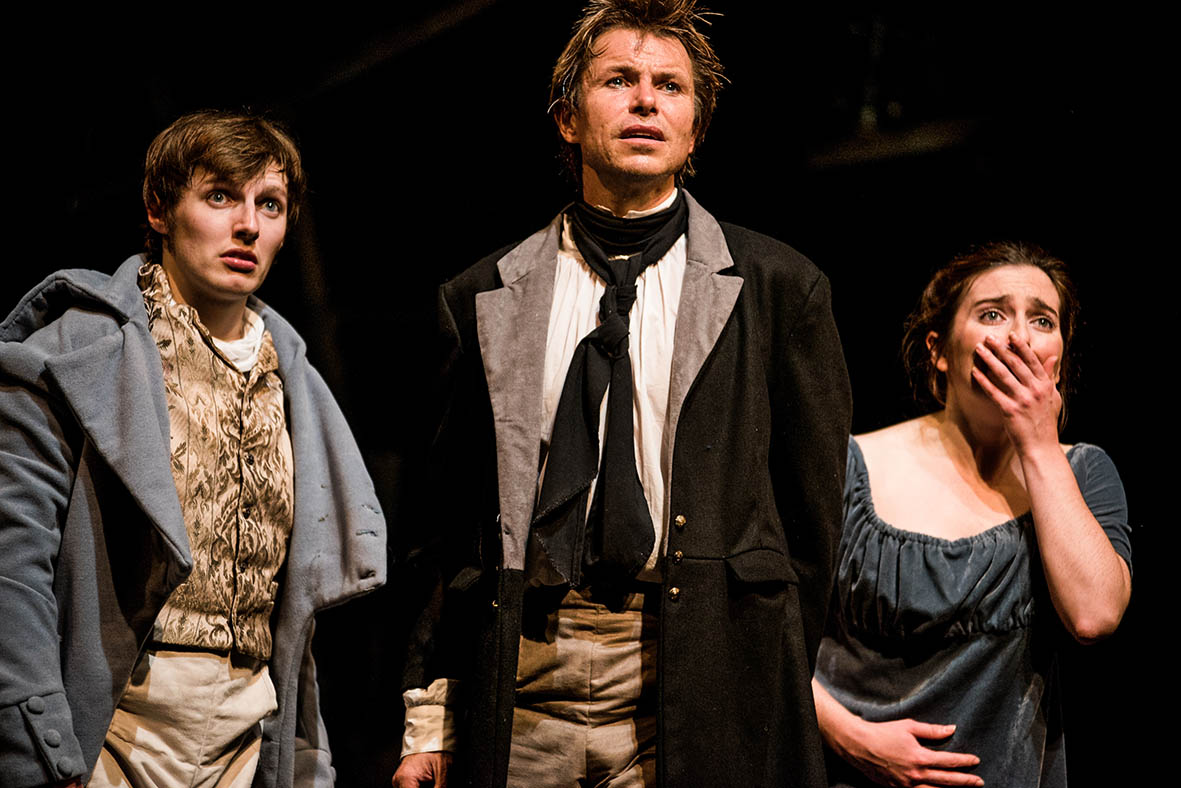 In brief (very brief), Victor Frankenstein is obsessed with the idea of finding the secret of eternal life. He is enthusiastic about this to the point of madness. He creates a monster who yearns for happiness yet is rejected by everyone – including Victor - and doomed to be alone. He starts to kill the people close to Victor in order to gain his attention and swears that he will kill no more if Victor makes him a female companion. Victor promises this but then changes his mind, due to the fear that two monsters will be worse than one and they may also reproduce.   The Monster exacts terrible revenge, condemning Victor to a life with only one purpose: the destruction of the Monster. Oh the irony.

The versatile cast of five are to be commended for their performance skills and acting ability. Although I felt the story took a while to get going, the way it is staged is so imaginatively done that your attention is held at all times. I absolutely loved the sounds and sound effects produced and using timpani drums and cymbals. This was so effective, building the atmosphere skilfully, injecting fear and foreboding into the proceedings.

The story is mainly told in flashback. Victor encounters a stranded ship and they give him shelter as he is at the point of collapse while pursuing the Monster.   He tells the Captain, Robert Walton (Ashley Sean-Cook), his story. The flashbacks are done extremely well, we switch from the present to the past rapidly and it is seamless. The lighting is used very skilfully to take us between the different times.

Ben Warwick as Victor Frankenstein is quite spellbinding with his wild-eyed insanity, clearly a man on the edge. Initially I found some of his delivery a little stilted but then as the show progressed, I felt the delivery matched the frenzied nature of the character. We seem him flit from obsession to insanity to a brief spell of happiness and then back to insanity again and it's almost exhausting to watch because Ben conveys it so well.

Max Gallagher as Henry Clerval (and a few other minor characters) is instantly likeable and his happy, cheerful disposition is a stark contrast to Victor's obsessive and deranged manner.

The sixth member of the cast is the monster. This is so impressive. It is operated as a puppet by two or three of the cast at any one time and it put me in mind of War Horse where the puppeteers are clearly on view but you just don't see them because the puppet itself is so believable.   I truly felt that this monster was a living, breathing creature. The puppetry was absolutely stunning, every movement was convincing, every breath had me believing that this was a real monster on stage. I particularly liked the way that the all the puppeteers would breathe for the Monster at the same time or be angry or laugh all at the same time – this was really eerie and quite scary. Louis Labovitch provided the monster's voice and he did this excellently.

I found myself sympathising with the Monster, who, let's face it, could quite justifiably use the phrase "I didn't ask to be born".   He was lonely.   All he wanted was to be accepted but the only response he got from everyone was hate and fear.   He became more of a monster because of this.   Quite a deep message in there that is relevant today.   It begs the question, are monsters made or born? This one didn't have a choice. The Monster bitterly declared that "people are monsters". No arguments there!

This is an excellent production with a fantastically talented and versatile cast. The set and props were deceptively minimal but very well utilised and as for the Monster, well, he should have had a curtain call all to himself.

Don’t miss the chance to see this wonderful production of an English classic. It's only on for one more night at Sale Waterside on Thursday 24th November.