This year the whole of Manchester celebrates as it is named the 2016 City of Science, and what better way for the theatre world to honour this accolade than to produce a work about the man who put both Manchester and modern computing on the scientific map; Alan Turing.

Breaking the Code is a wonderful play. Not only is it factual (partly romanticised but the main facts remain constant), it is also extremely well written, showing Turing as a real and empathetic human. There are lighter more comedic moments and there are darker and unhappy moments in equal measure, and directed by Robert Hastie, this play found the perfect pace delivering those highs and lows to perfection.

The play therefore is a biography of the man responsible for cracking the infamous Enigma Code during the second world war, and for developing computer science by designing and building the first computer. [universal computing machine]. The play also delves into his troubled private life. His homosexuality and his penchant for younger men. Of course, England's laws at that time were a little different from how they are now, and in a very interesting line from the play, the officer investigating Turing states that although homosexuality may not be a 'crime' (per se), it is against the law. 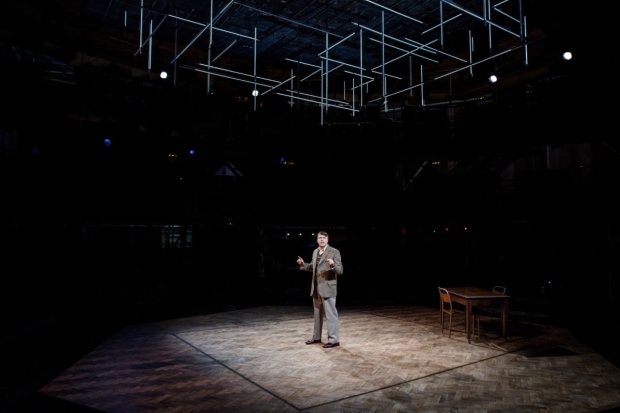 This means that Turing suffers the indignity of a trial, and escapes imprisonment by agreeing to take a drug, oestrogen, thought to alter a man's hormones and 'turn him straight'. The play doesn't decide, as indeed history hasn't been conclusive yet either, but it is generally accepted that Turing took his own life.

It sounds a little maudlin I know, but in fact the majority of the play is quite upbeat and optimistic, and with solid, firm and intelligent directing (Hastie), and a superbly cast team of actors, this is an uplifting celebration of the man's life and achievements.

Phil Cheadle played the police inspector Mick Ross with a rare sense of humanity. On the surface, he was upholding the law and doing his job, whether or not he agreed with it or not, showing some compassion towards Turing. Again, it was a highly intelligent and well considered performance.

Raad Rawi played Turing's boss Knox at Bletchley during the war, and brought with him a new dynamic to the stage; and whilst other cast played the one-night affairs of Turing, one affair shown in this play to be the catalyst to Turing's unmasking, that of Ron Miller (a nom-de-plume used on occasion by Turing himself) was played with relish and hard-nosed realism by Harry Egan.

There was one role though with whom I did have a slight concern, Natalie Dew. Her acting was exemplary, and indeed embodied the role as best she could and she had a great stage presence, none of that can be denied. She was however portraying the character of Pat Green, and although a fictional character, is heavily based on a real one, and the only female member of the code-breaking staff during Turing's time at Bletchley, namely Joan Clarke. I am therefore struggling to understand why this role was given to an actress of obvious Asian decent when Clarke was Caucasian. [especially when a young actor was found who most definitely looked Greek and could speak fluent Greek as the play called for this].

The set (Ben Stones) was a simple wooden floor with a period desk and a few simple wooden chairs, nothing more, as these were arranged and rearranged for each scene as they flowed seamlessly from one to the next. This I liked, the simplicity, the minimalism, the neatness, the basic-ness. On top if this though a whole panel of strip lights in coded formation above the stage, and various parts of these lights came down for each scene to 'form' or 'frame' the set. I understood this, and indeed my companion for the evening liked this. I have to say though that it did nothing for me. That's the beauty and the curse of theatre - it's subjectivity!

However, that notwithstanding, The Royal Exchange have certainly found a winning combination with the cumulative talents responsible for Breaking the Code, and it is one of the most intelligently constructed and entertaining pieces of theatre I have seen at The Royal Exchange for quite some time.